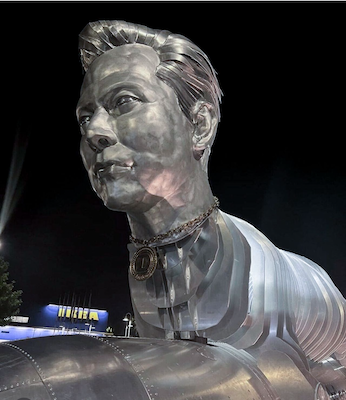 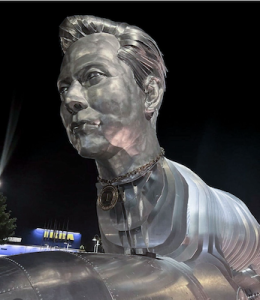 Late last year, Kevin Stone received a call asking if he could create a statue of a huge goat with Elon Musk riding a rocket as its head. Metal artist Mr. Stone in British Columbia, Canada, believed the caller was Elon Musk. Mr. Stone, who is frequently commissioned to create metal eagles and dragons, remarked, “I mean, who else would want anything so crazy?”

A couple of cryptocurrency business owners made the request. In order to promote their cryptocurrency, the Elon GOAT, Mr. Musk was persuaded to tweet about the sculpture to his more than 118 million followers. According to co-founder of Elon GOAT Ashley Sansalone, “Elon tweeting us would validate the token.”

It is the most recent publicity gimmick in the cryptocurrency industry, where memes and jokes regarding virtual currencies frequently take over social media. But it’s uncommon to use a 12,000-pound sculpture as a marketing ploy.

Elon GOAT’s founders claim that their admiration for Mr. Musk served as the inspiration for the name of their cryptocurrency. They believe he is a “GOAT,” or the “greatest of all time,” along with his other admirers. They created a sculpture of Mr. Musk’s head on a goat’s body while he was wearing a gold-plated dogecoin necklace for $600,000. The rocket can move and point upward as though it were about to ascend. Flames can erupt out the back thanks to the gas pipes that run through it.

Sculpture to be dragged to Tesla’s office in Texas

The sculpture will be delivered on Saturday to the offices of Tesla Inc. in Austin, Texas, with the expectation that Elon Musk would show up and collect it. The occasion is being dubbed “GOATSgiving” by its organizers.

An inquiry for comment from Tesla received no response. Mr. Musk hasn’t acknowledged his resemblance to a four-legged creature or contacted the creators of the token.

One of them, Mr. Sansalone, claimed that he runs a construction business and trades energy in addition to working full-time on the token. The Elon GOAT token is not a well-known cryptocurrency, in contrast to bitcoin, ether, or dogecoin. According to CoinMarketCap, it is rated far outside of the top cryptocurrencies by market value.

The sculpture’s concept came together last year. Mr. Sansalone, 40, added, “It was an evening joke that just kind of came to completion.”

Mr. Stone created Mr. Musk’s head, which took him close to six months to finish. According to Mr. Sansalone, other people in Phoenix created the goat body and rocket to expedite the process. The components were then assembled and fastened to the back of a semi-truck trailer that was 70 feet long.

DeMarco Hill, 51, who resides in Goodyear, Arizona, saw the statue for the first time in September and remarked, “When I first saw the statue my jaw dropped,” His 12-year-old son was taken by him, and they began to follow. You had never seen anything like it before, she said.

Mr. Sansalone was approached by Mr. Hill, a trucker and owner of Stay Ready Trucking, who found the stunt to be so funny that he asked if he might take part. Only someone with a specific license could go past the towering mound of metal, according to Mr. Sansalone, who claimed Mr. Hill was required.

Later, he transported the sculpture to Texas by driving it via California, Arizona, and Washington. Passing motorists beeped their horns or gave the thumbs up.

He complained, “If I pull up to the side of the road, it’s like people are swarming around.” It becomes crazy. Denise McKinney witnessed it pass by last month while purchasing lunch from a taco truck on Sunset Boulevard in Los Angeles. The 43-year-old author remarked, “My initial thought was like, ‘What the heck is this?'”
The face was then recognized by her. She reportedly muttered to herself, “Ugh, of course Elon Musk is on it.”

Mr. Sansalone says that most reactions to the sculpture have been positive. No one has reported mistaking Mr. Musk for someone else, according to him. Mr. Sansalone thinks that the world’s richest man, Elon Musk, who recently acquired Twitter Inc. for $44 billion, is “arguably the most relevant person on the planet right now.

During Tesla’s artificial intelligence conference in September, the sculpture was displayed in front of the company’s Palo Alto, California, headquarters. At that time Tesla employees crossed the street to take pictures with the artwork.   Judging some tweets he posted while at the conference, it seems Mr. Musk was there, and Mr. Sansalone suspects the billionaire noticed the sculpture. He claimed that all that was visible was a lit-up rocket set up in the center of the street.

Elon GOAT has been publicizing the Saturday event and tweeting at Mr. Musk for the past month in an effort to give him enough time to travel to Austin, according to Mr. Sansalone. When a flight-tracking service revealed that Mr. Musk’s plane was on its way to Austin on Wednesday, they were encouraged.

On Saturday in the late afternoon, they want to deliver the sculpture to Tesla’s corporate offices. It is hoped that Mr. Musk will publicly acknowledge it.
Mr. Sansalone claimed he has just one plan in the event that Mr. Musk doesn’t: “Go home and cry.” 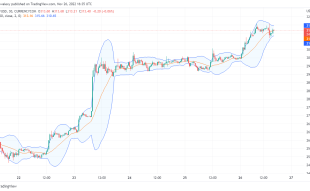