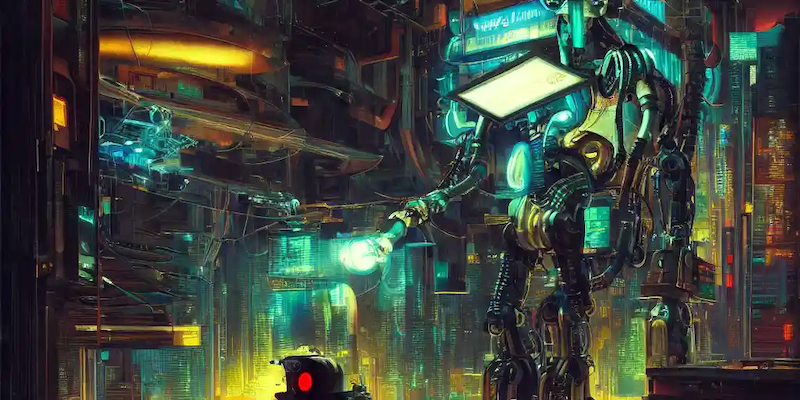 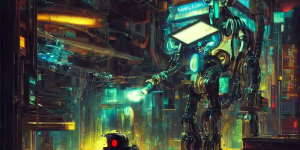 Check the example above if you’re not convinced of artificial intelligence’s capability. It was quickly created by typing the phrase “robot carrying a bag full of cryptocurrency in a dark alley” into StableFusion, a free, open source A. I. program that can be used to generate images from textual input.

The most recent AI model from OpenAI is considerably more potent. ChatGPT is a startlingly lifelike chatbot that can generate reams of intelligent prose on practically any topic you can think of. Additionally, unlike other language generation models, it is able to remember what you have told it. This enables you to have conversations that convincingly convey the activity of a mind.

The chatbot’s ability to convert human commands into lines of code is impressive: In response to my instructions, ChatGPT created an NFT using the image created above by writing a smart contract in the Ethereum programming language Solidity.

Even though ChatGPT is only a free research sample, it has already captured the attention of the tech community and reached a million users just five days after its late last month introduction. Comparatively, it took the AI coding assistant on GitHub around six months to reach the same milestone.

The cryptocurrency community has also been drawn in by the idea of outsourcing mental drudgery to an AI assistant. The deployment of an overconfident chatbot is both interesting and hazardous because there is plenty of room for those who soar much beyond their capabilities in this environment. ChatGPT makes it simpler than ever to create harmful code or spin up a honeypot convincing enough to trick investors, even while inventive developers can use the technology to improve their software or overcome language obstacles.

Some crypto experts are already effectively utilizing the technology. The chatbot has proven to be extremely helpful in summarizing complex code and lengthy scholarly texts, according to Hugh Brooks, head of security at the smart contract auditing company CertiK.

The creator of a small blockchain security startup named Zellic, Stephen Tong, also claimed that his business already uses it for sales and customer service. He claimed that this increases productivity for all team members, enabling cosplaying tech bros to deliver a “super-buttoned-up, professional experience” with ease.

Tomiwa Ademidun, a young Canadian software developer, is also at the vanguard of the group of crypto-utopians. She used ChatGPT to create a cryptocurrency wallet from scratch and then produced an in-depth manual that explains how to use it.

It’s really rather stunning, he admitted. Ademidun was taught difficult encryption ideas by ChatGPT with the affable charm of a supportive computer science instructor in high school, and the program eventually produced what Ademidun described as nearly faultless code. And when Ademidun saw an error, the chatbot immediately apologized and fixed it. The young software engineer experienced a brief career crisis as a result of this: What do you still need me for after ChatGPT?

It turns out quite a bit. The technology is far from flawless and often spouts hot rubbish when confronted with impossibly difficult questions. Have no arms or legs and are stranded on a desolate island? The chatbot suggested that you “build a makeshift wheelchair” after using your arms to crawl or scoot. Need assistance sending Chinese food to a spacecraft headed for Mars? It stated that “several space agencies offer meal delivery services to astronauts.”

It takes a savvy programmer to navigate through ChatGPT’s unwavering faith in its own jargon. Lorenzo Sicilia, the chief blockchain engineer at Outlier Venture, explored with the technology but found it unusable for more complex smart contract operations. The minute you give it a shot, you find all the little things that don’t work, he remarked.

The ChatGPT code was limited to a dated dataset from 2021, and when placed into the most recent virtual machines, it produced errors. Additionally, it is unable to officially check its own code because it is a pompous conversational AI.

While some cryptocurrency developers have found ChatGPT to be a steadfast debugging help, others are already attempting to capitalize on the technology. Stablecoin engineer Daniel Von Fange stopped a submission for a large “bug bounty” earlier this month that he thinks was brought on by ChatGPT.

He revealed to Fortune that the program had combined simulation code (written in one programming language) with testing code (written in another programming language) and created a third problem that was just as fictitious as the other two. He explained it to cybersecurity site The Daily Swig as being like “someone with all the bravado and sponsor-covered Nomex of a NASCAR driver, but who can’t find the steering wheel in a pickup truck.”

Artificial intelligence that can write convincingly about rubbish is also ideal for creating coordinated harassment campaigns from obnoxious Twitter bots or phishing efforts that lead them to malware generated by GPT. Opportunists searching for a new round of trusting investors can also use it.

So-called educational material that might not be true is equally detrimental. Similar to this, those who are unable to read code risk losing money due to poorly programmed AI-generated trading bots.

Ademidun, however, resides on the upbeat side of technological determinism despite the dangers. Like any tool, ChatGPT can be used for good or bad, he asserted, but what’s more significant is that it has the potential to be incredibly potent, particularly as OpenAI begins feeding it additional data, including real-time data.

In fact, the developer claimed he would have gladly paid $250,000 if ChatGPT had been successful in locating a problem in Von Fange’s code. The chatbot is evidence that progress has already departed from the station. Ademidun asked, “Are you going to jump on or just watch it move by you?”

A false sense of greatness?

People are undoubtedly using it outside of cryptocurrencies in normal daily life. One consultant admitted that he had forwarded a report generated by AI to his unaware employer, who had made only minimal adjustments before delivering it to the customer, after dropping a few brief remarks about a plant he had visited into a prompt. I was told by a confused lawyer at a prestigious London law firm that he used it to create an endless supply of bedtime stories for his kids.

However, ChatGPT might be best seen as an intriguing science experiment in its current, constrained form. OpenAI founder Sam Altman claimed on Twitter that the technology has given people “a false sense of greatness.” He claimed it was merely a “preview of progress.” It would be a mistake to depend on it at this time for anything significant. 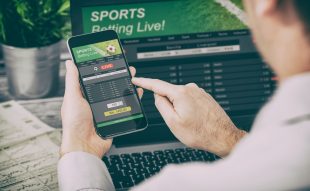 Inside Stake.com’s Partnership With Kick.com: A New Era Of Live Streaming And Crypto Casinos

Join Our Telegram channel to stay up to date on breaking news coverage Inside ...