Homenewscircle announces usdc will be supported in five more blockchains

Circle has announced that the USD Coin (USDC) stablecoin will be available on five additional blockchains. These blockchains include Arbitrum, Cosmos, NEAR, Optimism, and Polkadot.

According to Circle’s Chief Product Officer, Nikhil Chandhok, five additional blockchains will support USDC by early 2023. Chandhok made the announcement during the Circle Converge22 Conference.

The VP of Product at Circle, Joao Reginatto, also released a statement saying extending multi-chain support for USDC would boost its adoption by exchanges, developers, and institutions. It would also support innovation and make it easier for people to access a stable digital dollar.

The USDC stablecoin will be supported on Arbitrum, Optimism, NEAR, and Polkadot by the end of this year. However, compatibility on the Cosmos network would launch by early next year.

The announcement today about USDC’s expanded support will bring the total number of blockchains compatible with USDC to 14. Besides the recently announced, USDC is already supported on Algorand, Avalanche, Ethereum, Flow, Hedera, Polygon, Stellar, and TRON.

The executives at Circle have also announced the upcoming release of the Cross-Chain Transfer Protocol for the USDC token. This protocol will streamline the process of cryptocurrency transactions across different blockchains.

Circle has also added that it will help developers develop wallets, decentralized applications (DApps), and financial service tools that will allow and encourage the easy transfer of the USDC stablecoin across different networks.

The company later released a statement saying that the current models adopted for transacting with the USDC stablecoin across different networks were “creating fragmented liquidity and a complicated user experience.”

According to Reginatto, the Cross-Chain Transfer Protocol would allow USDC to operate as a universal dollar liquidity layer across different ecosystems. It would also provide a capital-efficient way of transporting value across the cryptocurrency sector.

The growing popularity of USDC

USDC and USDT have become increasingly popular following the collapse of algorithmic stablecoins such as TerraUSD (UST). According to Circle, the stablecoin’s issuer, USDC, seeks to differentiate itself from other stablecoins by having a solid backing of cash reserves.

USDC retailed its value and reputation after the collapse of the Terra network. The growing popularity of USDC at the time was caused by auditing the stablecoin’s reserves by financial institutions based in the US.

While USDC has prided itself as one of the most regulated stablecoins, its status can also be controversial. Last month, the US Treasury sanctioned the Tornado Cash crypto mixer tool alongside wallet addresses linked to the tool. Circle froze the USDC linked to these wallets, which triggered controversy from privacy advocates. 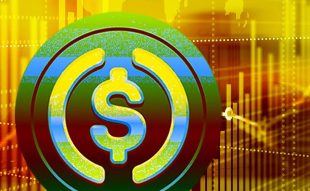