The recent dip in crypto prices has spooked many investors. Some of the largest firms like Celsius, Voyager, BlockFi and 3AC have faced liquidity crisis, and some exchanges are laying off staff to cope with the current market conditions.

Wood is still bullish on her investments in the cryptocurrency space. Some of her top ten holdings in the space are Jack Dorsey’s Block and Coinbase. The latter is facing issues with liquidity, and it has laid off 18% of its staff. Wood also commented about the recent reports that FTX planned to acquire Robinhood. She said that the fund only accounts for around 2% of her fund’s portfolio.

Wood also talked about the fund’s plans of creating a cryptocurrency wallet that could be a game-changer in the crypto space. She said that the space could create a scenario where one wallet provider or few will dominate the entire market. She also added that it was still too early to determine who would win the game.

Goldman Sachs recently issued a downgrade on Coinbase (COIN) shares by removing them from “sell” to “neutral”. COIN stocks have dropped by 85% from their all-time high. However, this is similar to the shares of Robinhood and Block which have dropped by more than 50% year-to-date. The Ark Invest Innovation ETF (ARKK) was also affected, having dropped by around 55% YTD.

The TerraUSD (UST) stablecoin suffered a notable decline in early May, a factor that affected the entire market. The collapse of Terra LUNA affected the entire decentralized finance (DeFi) ecosystem, but Wood praised the sector for holding well despite the crash.

Wood also attacked some of the high yields offered by some DeFi protocols and the excess leverage exposed during a market recession. She noted that stablecoins were problematic adding that, “as an economist myself, I didn’t understand them. It makes sense to me that they are not going to exist.” 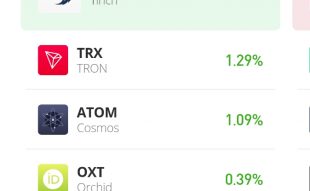 1inch inched to the top of the crypto daily mover today. This crypto displaced ...