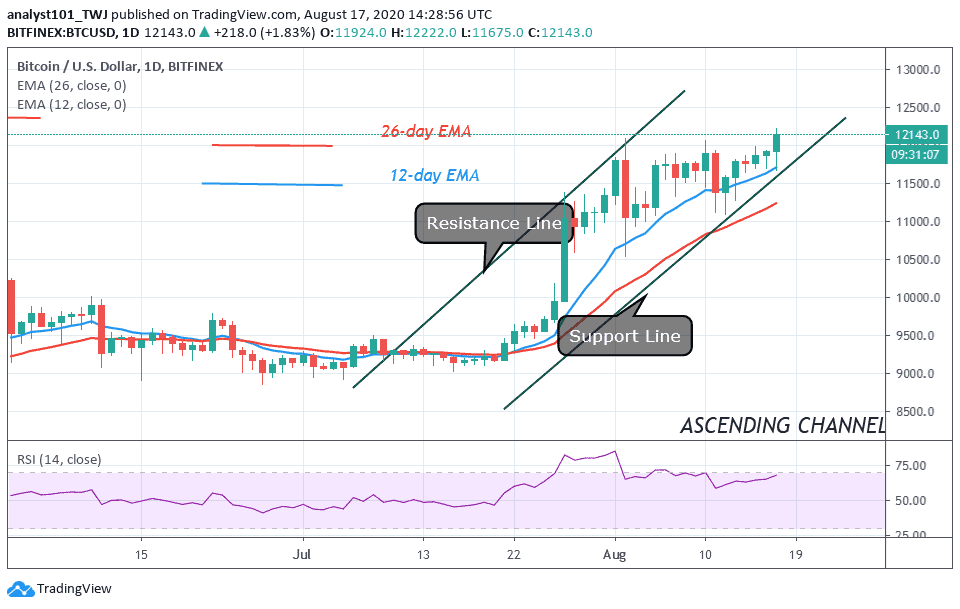 Today, Bitcoin has resumed its uptrend as price reaches a high of $12,200. For the past four days, buyers have been pushing price to $11,950 resistance. Each time price reaches the resistance zone, it will fall to the lower range to continue the sideways move. In essence, to break the $12,000 resistance, the bulls have to clear the resistance between levels $11950 to $12,050. The bullish scenario has been fulfilled as BTC continues its Journey to the first target at $13,000. Subsequently, the momentum will extend to $15,000 and above.

The breaking of the overhead resistance is seen as one of the strongest resistance. That is the reason a break above it will propel price to rally on the upside.  Nonetheless, we have seen the bullish scenario when price breaks out. However, if the bulls fail to break the $12,000 resistance, the bears will break the $11,700, and the current upside range will be dismantled. The bears will push price to $11,100 or $11,250.

Warren Buffett Buys Gold, May Buy Bitcoin by Morgan Creek Digital Co-Founder
According to Jason Williams, Co-founder of Morgan Creek Digital, that Warren Buffet is likely to buy Bitcoin. He believes that younger people working for him will buy if the American business tycoon, Warren Buffett delays buying Bitcoin. Williams indicated that there were recent changes to the portfolio of Berkshire Hathaway where Buffett is the chairman and CEO. The firm sold bank stocks and airline stocks to buy Barrick Gold, a Canada- based mining company. The company also sold Goldman Sachs stock, alongside cutting his position in JPMorgan Chase by 61% and selling some of its Wells Fargo and PNC holdings.

Bitcoin has broken above the $12,000 overhead resistance. What matters is that the bulls must sustain the upward move. In the Fibonacci tool, a bearish candle body tested the 0.236 Fibonacci retracement level. This implies that BTC will reach a high of 4.236 Fibonacci extension level or $15,000 high.