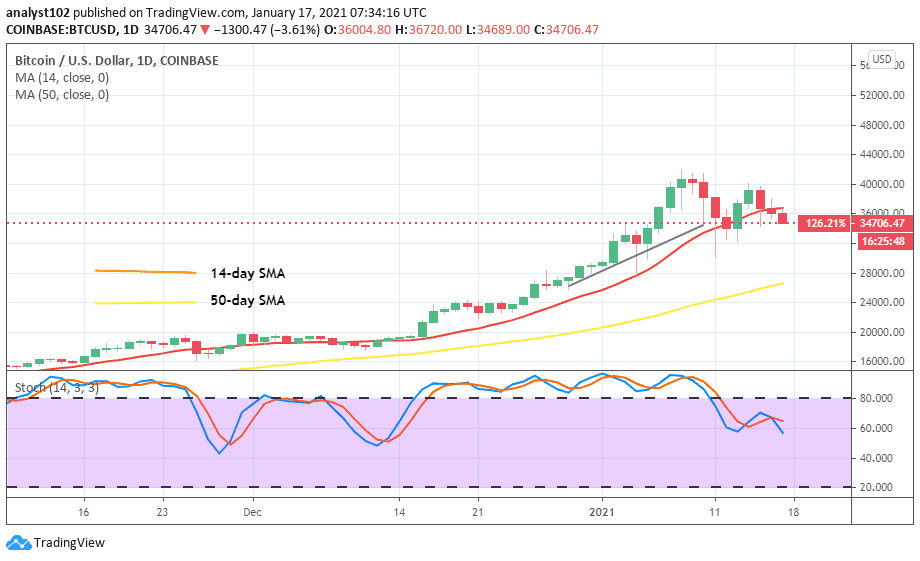 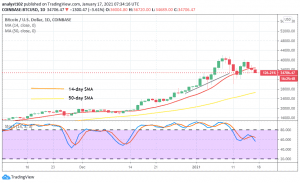 Bitcoin Price Prediction – January 17
After several a visible number of trial efforts to breach past a main resistance price line around the $4,000 value, Bitcoin’s worth eventually relaxes muscle as trade with the US dollar until the present time of writing.

BTC/USD – Daily Chart
There has been a notable sell signal looming in the BTC/USD market, denoting that bulls’ pushing forces are now gradually getting weak. On January 11, the 14-day SMA trend-line broken southward to test a low point at $30,000. And, yet, the price is slightly trading below the sell signal of the smaller SMA trading indicator around the $35,000 level. The 50-day SMA is still underneath the price-value tested previously, a bit over a support line at $25,000.

What is likely the BTC/USD next price position?
In the meantime, a key resistance value at $40,000 has formed to mark a potential selling point for bears to brace up for a come-back. The BTC/USD bears now struggle to push the market down below $35,000. The Stochastic Oscillator has briefly crossed hairs to the south below range 80 to signify a falling pressure.

Should the present slight-falling forces hold long in the BTC/USD trading activities, bears could potentially move price past the former tested support trading area of $30,000 to afterward find a lower support level around $25,000 mark in no time. Meanwhile, at that earlier mentioned value, traders should be wary of getting late as there is a tendency that the market will see a quick-northward reversal move that could result in bears’ trap. 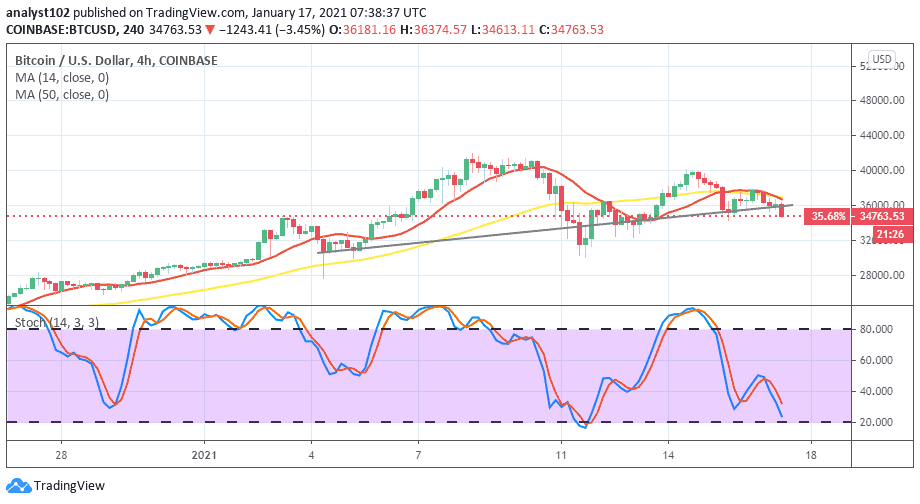 Presently, price appears to fall under the $36,000 value, a bit below the two SMA trading indicators. That suggests that bears are some extent coming back to the crypto-market. But, Stochastic Oscillators have moved downward-pointing closer to range 20. Therefore, if the $32,000 price-line has to be breach southwardly, bears would have to exert more pressures to keep below it

Smart contracts facilitator and blockchain platform NEAR Protocol has gained 106% in the last ...