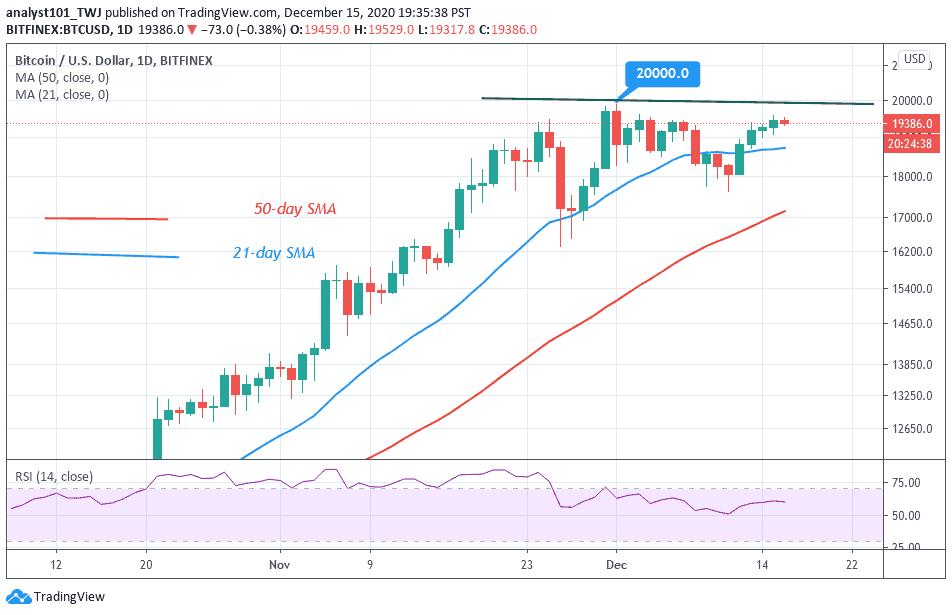 Following its recent slump on December 11, Bitcoin bulls bought the dips to resume another round of upside momentum. Surprisingly, Bitcoin’s upside momentum fails to surpass the previous records of bullish accomplishments. The king coin only reclaimed the $18,600 and $18,800 price levels as buyers pushed BTC above $19,600 high, Further upward move has been repelled as bulls resumed consolidation.

On the upside, if the bulls have succeeded to break the $20,000 overhead resistance, a rally above $22,000 is likely. The bulls merely tested the $19,600 resistance twice and pulled back to set the stage for consolidation. Meanwhile, BTC is at level 60 of the Relative Strength index period 14. It indicates that the king coin is in the uptrend zone and above the centerline 50.
.
Bitcoin Is the Third “Most Crowded Trade” in Global Fund Manager Survey
Bitcoin is regarded as the third busiest trade around the world. This was a survey carried out by global fund managers around the globe. The survey indicated that Bitcoin has beaten out traditional investments like Gold and Bonds. Earlier on, the asset managers have lost confidence in the dollar, encouraging them to seek out inflation-resistant investments for their clients.

A new survey of global fund managers discovered Bitcoin as one of the “most crowded trade”. The Global Fund Manager Survey was conducted by Bank of America Merrill Lynch in December. The first busiest trade is tech stocks (52%) and followed by short dollar positions (18%). Bitcoin is the third on the overall list of options for the category, named as the busiest trade by 15% of survey respondents.