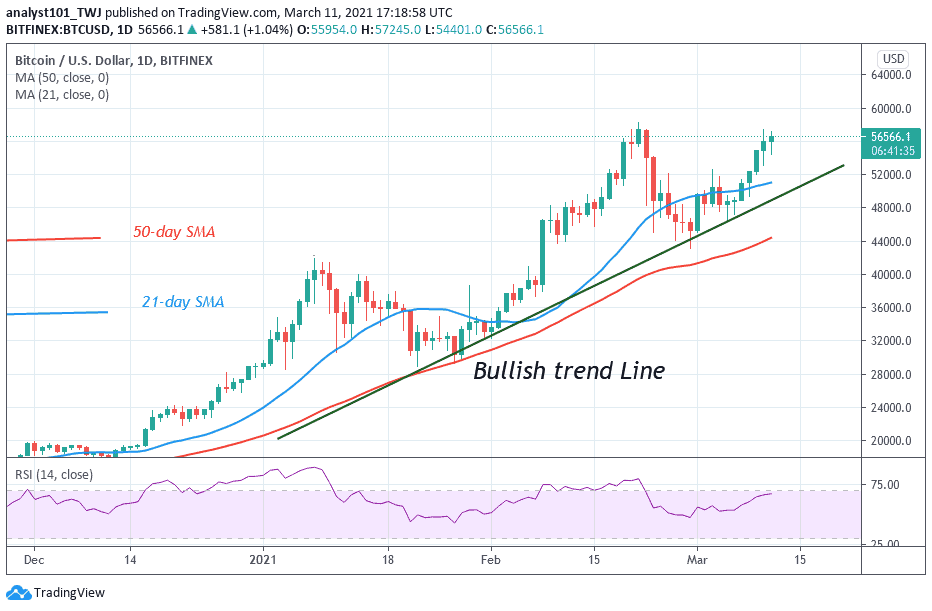 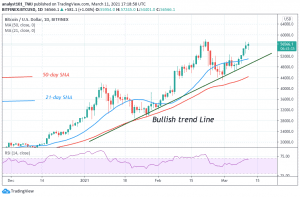 Bitcoin (BTC) Price Prediction – March 11, 2021
BTC/USD has continued its gradual push on the upside as it came close to the $58,000 overhead resistance. Yesterday, buyers pushed BTC price above $57,000 high but the price pulled back below it. The king coin is fluctuating as it is finding penetration difficult at the recent high.

For instance, a breakout at the $57,000 and $58,000 resistance will propel price to rally to $61,000 high. Conversely, if the bulls turn down from the overhead resistance, the bears will want to plunge the coin to the $52,000 low. Historically, the month of March has been the worst Bitcoin price correction which is called the Bitcoin “Black Thursday” on March 12. On that day Bitcoin crashed to as low as $3,800. Traders and investors were gripped with fear as there was panic selling and stop losses were being hit. This “Black Thursday” happened after the $10,000 resistance was retested. The crypto dropped more than 50% but it rebounded later.

Bitcoin (BTC) Indicator Reading
Bitcoin is above the 80% range of the daily stochastic. BTC price has been sloping above the overbought region since March 7. The 21-day and 50-day SMAs are sloping northward indicating the uptrend. BTC price is also at level 73 of the Relative Strength Index period 14. It indicates that the coin has not gotten enough room to rally on the upside.

Bitcoin bulls are attempting to break the recent high. The Fibonacci tool has indicated a further upward movement of the coin. On March 10 uptrend; a retraced candle body tested the 50% Fibonacci retracement level. The retracement indicates that Bitcoin will rise to level 2.0 Fibonacci extensions or the high of $61,571.20. Presently, the market has risen to $57,289 at the time of writing.

Azeez Mustapha •Updated: 25 October 2021 Updated:: Updated: 25 October 2021
View All News
Note that the content on this site should not be considered investment advice. Investing is speculative. When investing your capital is at risk. This site is not intended for use in jurisdictions in which the trading or investments described are prohibited and should only be used by such persons and in such ways as are legally permitted.