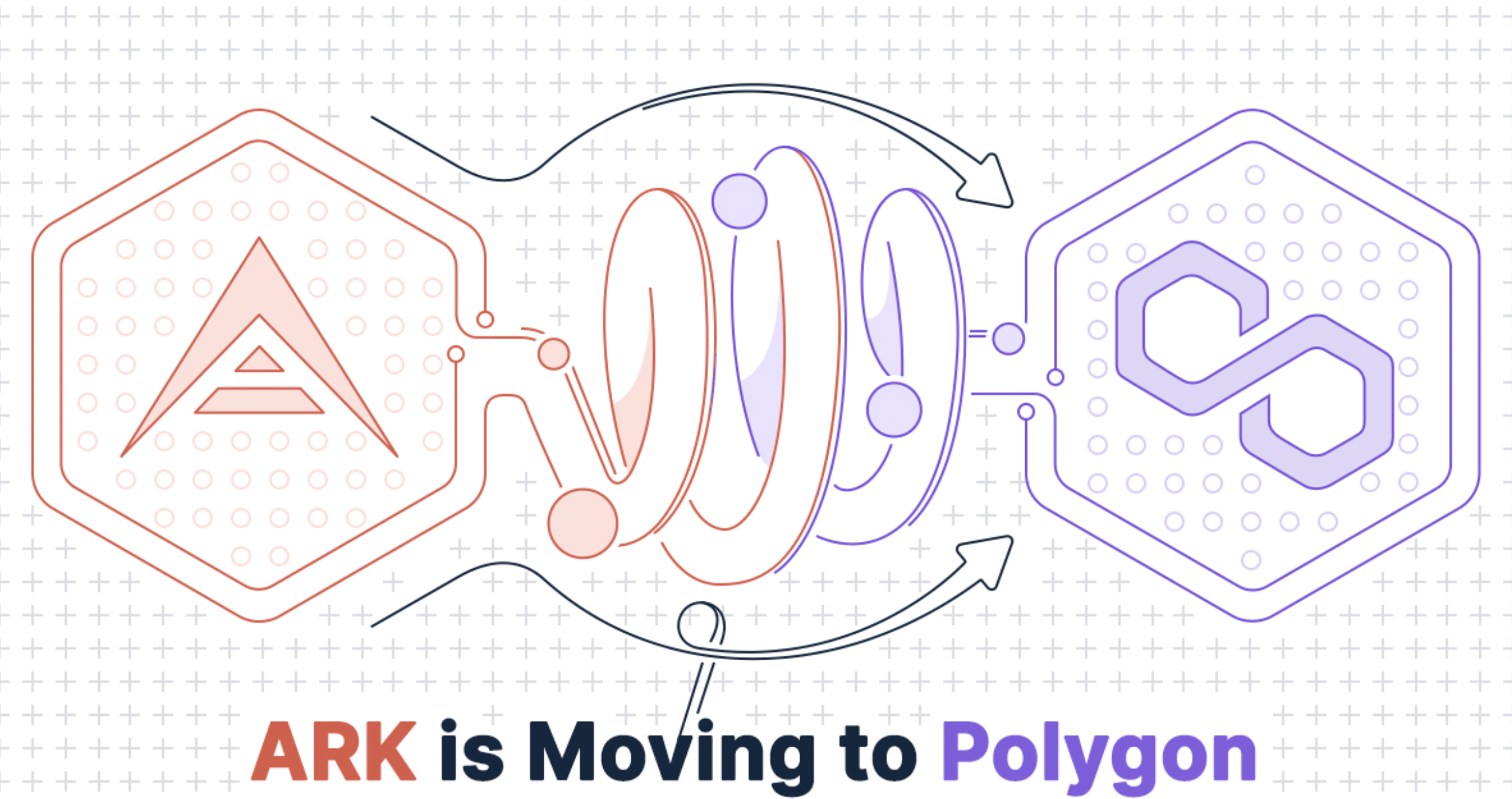 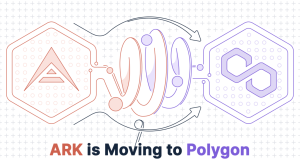 Ark price is trading at $0.345 with a bearish bias, recording more than 12% losses on the day. The bears are focused on undoing all the gains that ARK made following the news that the Ark ecosystem was migrating to Polygon. This saw the crypto display a massive performance that saw it rise from lows around $0.187 to brush shoulders with $0.531 over the weekend.

A number of technical indicators have sent bullish signals and the technical setup points to an upward movement, despite the ongoing correction. Is the news on migration to the Polygon ecosystem positive enough to keep the ARK price rallying?

The Ark Ecosystem Will Be Migrating To Polygon

Ark, a blockchain-based development platform, has revealed that it will be moving to Polygon. The announcement was made by ARK.io Chief Executive Officer (CEO) Ray Alvarez through the company’s official blog on December 7. This was also affirmed through the official Twitter account of ARK.io and the ARK Ecosystem which revealed the team’s readiness to work together with a “powerful developer community where our products can shine” within the scalable Layer 1 Polygon ecosystem.

Today we are happy to be announcing that we will be migrating to the @0xPolygon Ecosystem.

We are excited to be working alongside a powerful developer community where our products can shine!

According to the blog post, the “ARK product suite” has been undergoing a number of improvements with the enhancement of the “development pipeline” being this year’s top priority. According to Alvarez, ARK.io has been “building amazing products that everyone should be proud of” but they were being developed on a non-competitive Layer 1 blockchain.

The executive says that the company needs to build lasting products and to achieve that:

“…  we need to go to an ecosystem that is thriving, with both developer and community support. … we believe that Polygon is the better layer one solution and provides ARK with the best opportunity to collaborate, grow, and contribute within their ecosystem as a key producer of meaningful applications.”

The decision to migrate to Polygon follows months of working on Bearmint, a Blockchain Framework responsible for handling state management and persistence of ARK core. While the progress was fruitful, “internal testing and the current timeline to complete Bearmint have given us enough information to determine that neither Bearmint nor ARK Core are optimal solutions for the future,” the blog read.

What does this mean for ARK? According to the press release:

“[the ARK ecosystem] will be “migrating to the Polygon network and all support for ARK Core and Bearmint will be sunsetted. We know that ARK Core had a large amount of architectural debt and fundamental issues that continue to plague the consensus engine. Time, effort, and developer resources are better spent on creating great products. While ARK Core will no longer be receiving support, our existing ARK products will continue to work as they do now post-migration.”

Alvarez also said that as preparations for the movement to Polygon continue, “all existing ARK Core and Bearmint resources will be made fully open-source.”

For existing ARK holders, the migration will be provided at a ratio of 1:1 from ARK to Polygon within the “ARKVault which will be updated to support the ARK ERC20 token on Polygon.” It will be a one-way swap with more details on how this will happen in reality to be released in the future.

The migration is expected to expand ARK’s product line and incorporate new Web3 features as well as create a more robust and interconnected product suite.

While it is not immediately clear how the migration will benefit ARK users and developers, the CEO said that the “next blog will detail the benefits migrating to Polygon brings to the ARK Ecosystem.”

What Does This Mean For ARK Price?

After the announcement of ARK’s migration to Polygon on Wednesday last week, the price of the blockchain’s native token ARK dropped below the $0.2 psychological level creating a swing low at $0.187. This was approximately a 30% drop from the day’s opening with the investors unsure about what the movement meant for the ARK platform and its users.

The price went on to drop on Thursday and the news drew mixed reactions from the crypto community. For example, a Reddit user commenting on the ARK community’s post about the migration believed that it was the end for the crypto company and its token saying:

“Ark has finally sunk. What becomes of the Ark token now? It had virtually no purpose before, now what’s the point of it? [The announcement] contained virtually no pertinent information as to what the future of the project is. ….. What’s this about “suite of products” that they are excited about? Deployer, block explorer, and vault are now completely unnecessary. ….The Ark coi, is now even more useless.”

Similar sentiments were seen on Twitter from users who replied on ARK.io’s twitter post with Ark bArkman saying that he was not excited about the migration.

I'm not that excited. Such decisions should be voted by the community. Much more transparency would be highly appreciated. Hopefully some of us could continue the original Ark blockchain

These negative sentiments may have weighed down the price for a couple of days, but as the community began to appreciate the benefits of the blockchain operating on Polygon the price started moving upwards, rising as much as 183% between December 1 and 11.

The long upper wick on yesterday’s candlestick suggested that the bears were determined to stifle any efforts to push the price higher. However, the lack of a lower wick on the same candlestick showed that the bulls were fighting to defend the $0.35 psychological level, embraced by the 100-day simple moving average (SMA)

At the time of writing, ARK had just slipped below the said level and if the ongoing correction continues, increasing overhead pressure may push the price lower. The first line of defense will emerge from the 50-day SMA currently sitting at $0.30.

Additional support lines may emerge from the 78.6% Fibonacci extension level at $0.26 and the SuperTrennd green line at the $2.5 psychological level before the ARK price drops to revisit the $0.187 swing low.

On the upside, the ARK price appeared strong with the bulls determined to move the price higher. From the daily chart above, it is evident that the recent price pump led to the emergence of several bullish signals that pointed to a possible uplift from the current levels.

The first call to buy ARK came from the Moving Average Convergence Divergence (MACD) indicator when the 12-day exponential moving average (EMA) (blue line) crossed above the 26-day EMA (orange) on Friday, December 9. This suggested the market had flipped in favor of the buyers. At press time, the MACD was moving upwards and had just crossed the zero line into the positive region. Note that ARK’s upward movement will gain more traction as the MACD moves further away from the neutral line.

The following day the SuperTrend indicator sent another bullish signal when it reversed from red to green and flipped below the price on Saturday, December 10. This was an indication that the market sentiment had turned bullish and as long as this chart overlay indicator continues to trail the price, ARK is set to continue rising.

On the same day, another positive sign came from the Direction Movement Index (DMI) when the positive directional (+D1) line crossed above the negative directional line (-D1). The value of +D1 at 40 was way above -D1 at 14 showing that the bull’s grip on the ARK price was still firm.

Overcoming these barriers would see the crypto climb to tag the December 11 swing high above $0.531. Such a move would represent a 56% ascent from the current price.

Tokens In Presale With Promising Returns

With the greater crypto market still struggling to recover from the FTX disaster and the possible bankruptcy of other key market players, it may be a good time to explore buying at lower prices other altcoins that haven’t pumped recently or investing in lower-cap projects in presale.

There are a number of projects that have already raised a significant amount of capital in their presales and are poised for future growth. Dash 2 Trade (D2T) and Calvaria (RIA) are some of the new tokens currently in presale promising returns once they are listed on exchanges in the near future.

Dash 2 Trade is a decentralized exchange (DEX) built on the Ethereum blockchain that is set for launch early next year. The team behind D2T has so far raised $9.5 million with 99.79% of tokens in stage 3 of the presale sold.  In the fourth and final stage of the presale (which is set to start in the near future), the D2T price will rise to $0.0533. It would be good to invest in the token now before the price increases.

Calvaria is a blockchain-based card-trading game enabling players to battle with their NFT cards and earn rewards. RIA, the platform’s native token is currently in the last stage of the presale with over $2.4 million raised and only 22% of tokens left. 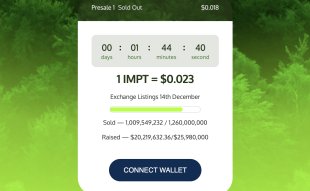