The cryptocurrency market has had a strong 24 hours. Starting yesterday at around $2.1 trillion, its total value has lifted to $2.2 trillion, a rise of just over 4%. While bitcoin (BTC) has been leading the charge, most of the biggest gainers are lower cost altcoins. Consequently, we’ve compiled a list of the 5 best cryptocurrency to buy on low prices. This covers coins priced under $150, and much lower.

AXS’ 30-day moving average has jumped well ahead of its 200-day average. This indicates that it has broken through to a new, longer term level. At the same time, while traders had been overbuying the coin in the last few days, its relative strength index has calmed to a more moderate level of 52. This suggests that, having sunk over the past day, it could easily resume its climb.

More impressively, Axie Infinity now boasts 2 million daily active users. Given that it boasted only 61,125 as recently as the end of May, this makes for just over 3,000% growth in under five months. It also represents a 7.8% rise compared to last week.

So yes, it may not be cheap for long, but AXS remains one of our 5 best cryptocurrency to buy on low prices right. 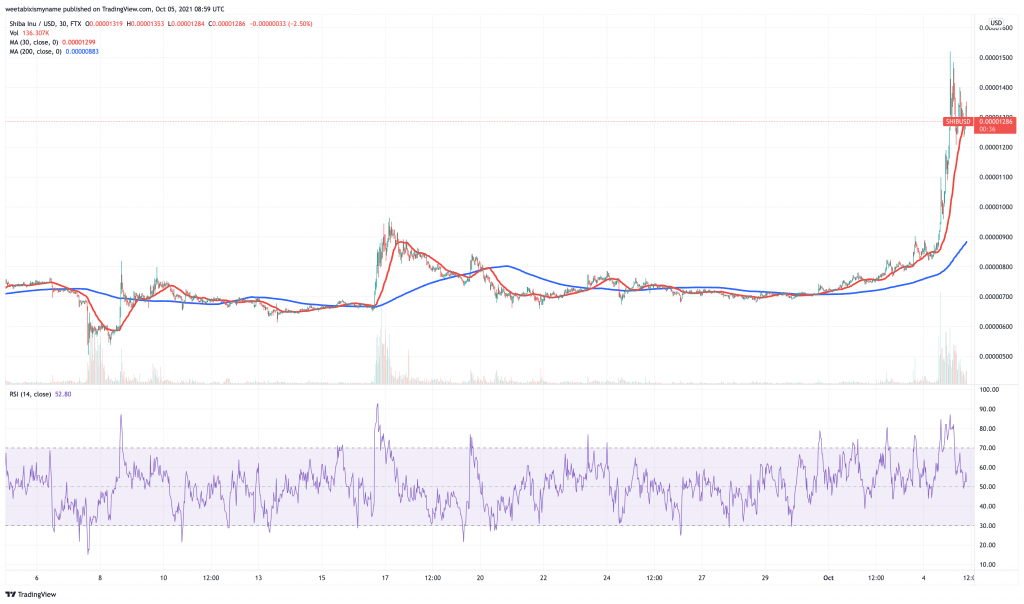 SHIB’s 30-day average has broken decisively away from its 200-day average, marking perhaps a new sustainable level. And despite its RSI flying into overbought territory yesterday, it has now backtracked to more viable territory.

Elon Musk is, yet again, the reason why SHIB has jumped so noticeably in the past 24 hours or so. Yesterday, the Tesla/SpaceX honcho tweeted a picture of his puppy “Floki,” which the market has taken as a massive buy signal for the coin.

SHIB’s fortunes have also seen a more modest upturn since Coinbase listed the coin on September 16, when it rose by 40% in a single day. However, even with yesterday’s leap, SHIB remains 65% below its all-time high of $0.00003791, which it set back in May. This suggests that it still has room for more big rises in the near future. 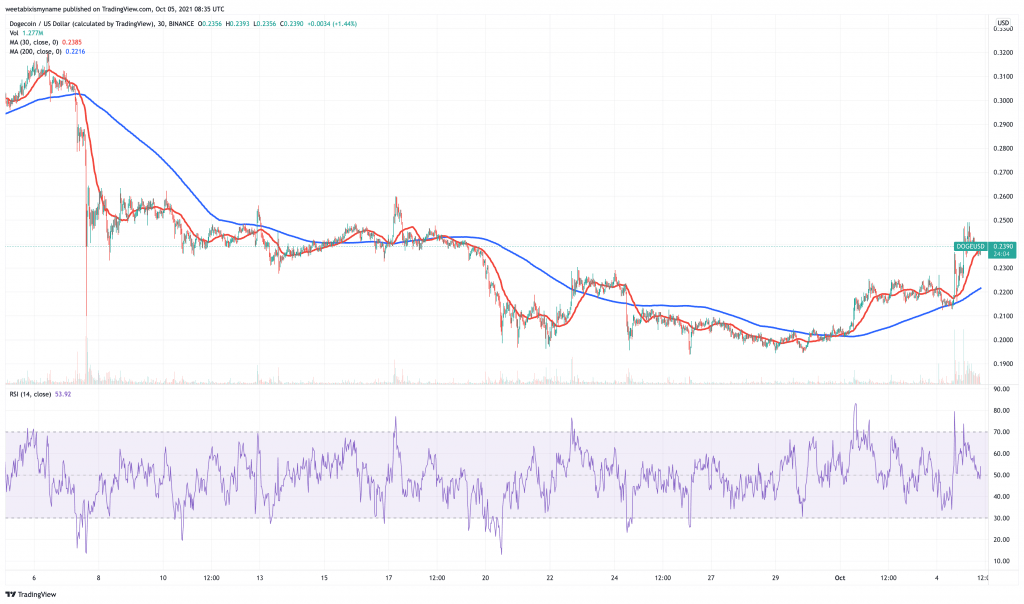 DOGE is another cryptocurrency that has its 30-day average moving ahead of its 200-day. And despite its strong surge in the last day, its RSI remains under 60, suggesting that it isn’t (yet) overbought.

While nothing has changed with Dogecoin on a fundamental level, it too has benefited from the Elon Musk tweet which appears to refer to SHIB. And while it hasn’t risen as strongly as SHIB, it arguably has a stronger community supporting it, giving it better long-term prospects.

For instance, its subReddit now has 2.2 million subscribers, while Shiba Inu’s has only 233,000. This arguably provides it with stronger support against a potential collapse in price, while also keeping it open to big increases in the future. 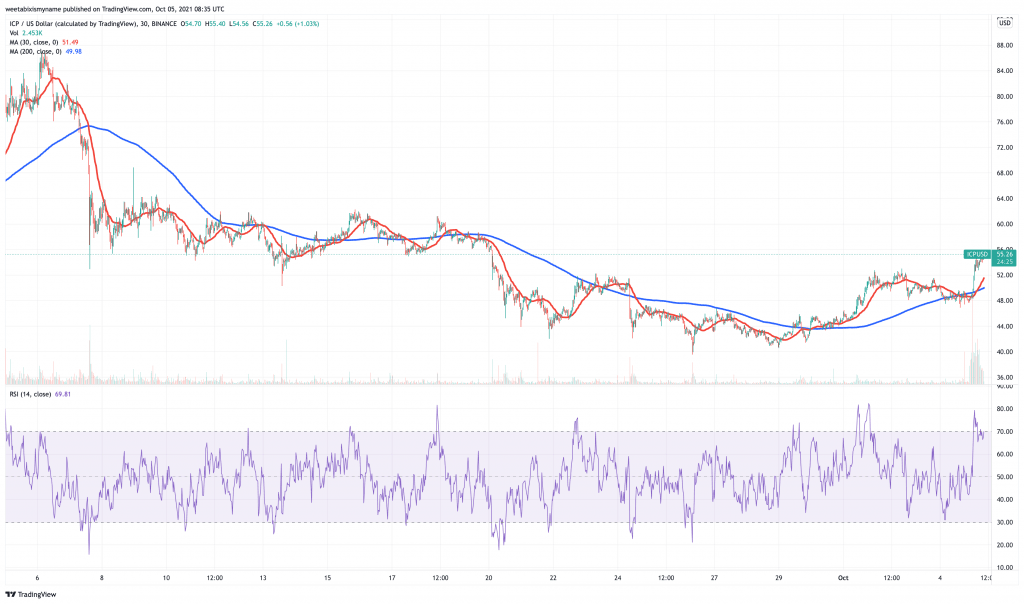 It’s possible that ICP has Facebook to thank for today’s movements. By going offline for around six hours (along with Instagram, Messenger and WhatsApp), Facebook has arguably highlighted the need for decentralised internet infrastructure such as that promised by Internet Computer.

Going back a few more days, Internet Computer’s community has voted through a proposal that will see it integrate with Bitcoin. What this means is that IC will deploy smart contracts that can hold, send and receive BTC, effectively providing Bitcoin with a second layer. This provides yet another reason why ICP is one of our 5 best cryptocurrency to buy on low prices. 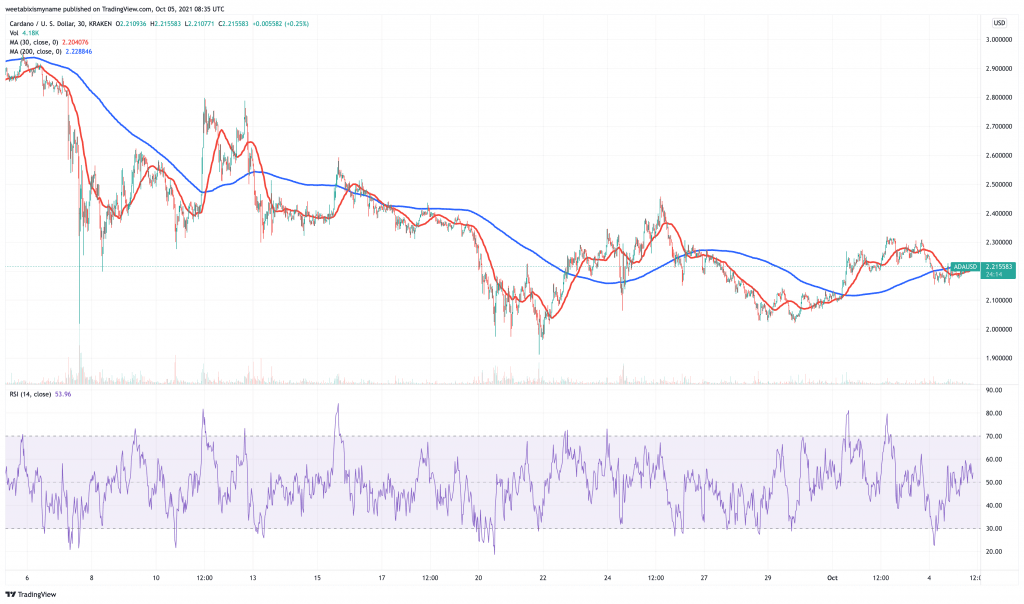 ADA’s 30-day moving average is on the brink of overtaking its 200-day average. At the same time, its RSI remains close to 50, suggesting that it’s far from being overbought.

While ADA is up modestly in the past few days, it hasn’t shown anything like the bullish price movement some expected prior to its launch of smart contracts. However, now that Cardano has been supporting them for several weeks, we can expect a steady trickle of new apps launching on the platform. By extension, this will result in increasing upwards pressure on the price of ADA.

For instance, the Cardano-based COTI payment provider has announced the launched of new stable coin called Djed. This uses smart contracts to ensure price stability, while it will also help provide the Cardano ecosystem with greater liquidity.

Cardano has also recently announced a new partnership with US-based telecoms group Dish/Boost Mobile. Together, they will develop and trial blockchain-based services for the group’s customers. 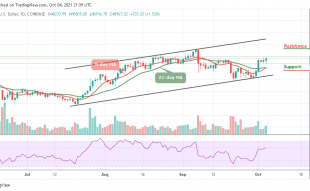