The price of XRP has risen over the previous day by 0.5% over the past week by 1.5%. Ripple’s share price, currently at $0.488148, is up 37% in the last 30 days on the back of rising market hopes that the company’s long-running legal battle with the SEC is nearing its conclusion.

With the tide turning in favor of Ripple in recent weeks, XRP has been one of the best performing top 100 cryptocurrencies over the previous month. If the corporation prevails in court, XRP will almost certainly increase in value.

Which Way Is XRP’s Price Headed?

Recent XRP gains have outpaced the market’s loss of 12.3 percent over the previous 30 days. It’s also noteworthy that the price of XRP has risen by an astonishing 130% since the SEC filed suit against Ripple and two of its executives on December 22, 2020.

A gain of this magnitude suggests that investors think Ripple has excellent prospects of winning its argument. In fact, when taking the market as a whole into consideration once again, the average price of a cryptocurrency has increased by a more modest 37% during the same time period.

Positive momentum for XRP has been building since the end of 2020, and the fact that a bear market has kept it where it is now is a bonus. Prices have been either stable or falling as the global macroeconomic situation remains quite grim, although XRP has defied this trend to some extent.

If Ripple is successful with its argument and the market recovers its positive tone, XRP’s price has the potential to soar. It is still quite possible that it can easily surpass its current all-time high of $3.40, established back in January of 2018.

During the last bull market, the price of Bitcoin increased from around $20,000 to over $69,000. If the same thing were to occur with XRP, the coin’s value may rise over $10. Even now, Ripple’s future seems brighter than ever. Even though the SEC had opposed it, Judge Torres allowed Ripple to submit two amicus papers yesterday that might help its cause.

To rewind a bit, the SEC and Ripple both filed motions for summary judgment in mid-September, which means they want the court to make a ruling on the matter rather than taking it to a full trial. This is significant since the SEC’s action started off XRP’s current surge. As of September 18th, when news of these actions first broke, the cost of one XRP was about $0.328290. It has increased by about 48.5% since then.

The lawsuit seems to be winding down, and many lawyers are certain that Ripple will emerge victorious. It has been successful in getting favorable rulings in the lawsuit, with the court most notably ordering the SEC to disclose emails related to a significant lecture Bill Hinman gave in 2018 on whether some cryptocurrencies constitute securities.

Will It Be A Long Wait For XRP To Shoot To The Moon?

Even if the last stages of the case have begun, the issue is when they will conclude. Recent comments from Ripple’s Brad Garlinghouse imply that it may still go on until at least Q2 2023, when observers had hoped to see a ruling. If this is the case, XRP investors still have some time to wait. Even still, as the most recent judgment from Judge Torres demonstrates, it appears that their persistence will pay out in the end.

Is There A Better and Faster Alternative?

Yes, there is! If you’re a trader who can’t stand the thought of waiting a few more months for significant returns, you should know that a number of smaller cryptocurrencies have been outperforming the market in recent weeks, with presale tokens seeing the most success. Impact Project (IMPT) is a potential new currency in this sector since it is a decentralized carbon credits marketplace that only started selling a week ago.

It’s built on the Ethereum blockchain and allows users to buy and sell non-fungible tokens (NFTs) representing carbon offsets, while also facilitating online purchases from businesses that promote environmental sustainability. It has the requisite building blocks to succeed at a time when ESG investment is trending heavily. 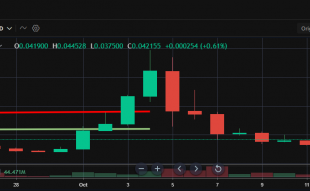 Tamadoge Price Dips; Is This The Opportunity You Were Waiting For To Invest?