Homenewswhat are non fungible tokens where to buy

With cryptocurrency and Blockchain increasingly finding their way into the news recently, many people find themselves drawn further into the digital world and its offerings. While it is attractive for the potential for profit it provides, for the inexperienced it can be a daunting task to wrap your head around all the jargon.

One popular question that seems to have been popping up in search engines is “What are NFTs?”. The three-letter acronym is increasingly becoming a hot topic in many places all over the world. A lack of knowledge on it might make it seem insane that people worldwide are paying thousands and sometimes millions of dollars for what seems to be useless internet art.

To fully understand NFTs, one must first have reasonable knowledge of the blockchain. The simplest way to explain it is that it is a publicly distributed ledger – a public record of cryptocurrency transactions available to be seen by everyone with access to the internet.

Enter non-fungible tokens, where ‘fungible’ is a synonym of ‘replaceable’. NFTs are non-replaceable tokens built on blockchain technology. While art is the most popular form they take, NFTs could be a wide range of things, anything from music to art and even real estate.

Why Invest In NFTs?

Some speculate that NFTs are in a bubble that sooner or later will burst. Many usually ask what inherent value is there in a digital picture of art, when you could download and view a jpeg on your computer for free?

While that may seem a legitimate criticism, a parallel with real-life artwork could be made. Why pay for the Mona Lisa when I could just as easily purchase a print of it for millions of dollars less? The answer is uniqueness. While there are thousands of duplicates of the Mona Lisa, there is only one original.

This originality is what people look for with NFTs and what better way to verify that originality than with the Blockchain which was made to be unchangeable and publicly accessible. NFTs really came into the public eye when Twitter CEO Jack Dorsey sold his first-ever tweet for over $2 million. Since then the NFT craze has multiplied bringing in a host of big players to its sphere.

Apart from big names in the NFT space, regular people are also managing to make millions from the craze. Two popular examples are the penguin and rock NFTs. EtherRock NFTs are set of 100 collectibles with no purpose other than to be bought and sold. As one of the first NFT collections ever minted, they usually cost thousands of dollars. The pudgy penguins are similarly a collection of 8,888 penguins currently selling for a profit.

How To Buy NFTs

Primarily NFTs are on the Ethereum blockchain and although some other Blockchains support them, Ethereum is your surest bet. Depending on what you hope to acquire, many vendors work on the Ethereum network with the most popular of them being OpenSea, Rarible, and Mintable.

The focus here will be on OpenSea. OpenSea is very popular for a multitude of features including its ‘price floor’ which specifies the minimum price that the NFT can be sold for.

Even though explaining the inner working of blockchain and NFTs seems complicated at first, actually acquiring NFTs is a relatively painful process and can be learned in a handful of steps:

Are NFTs Just A Fad?

Many people believe that the NFT craze will eventually die down citing the fact that these tokens have no inherent value and will eventually decrease in price. Whether or not this will turn out to be true remains to be seen but the furore surrounding NFTs is not so strange when compared to past events.

The Dot-com bubble is an example of a similar situation. The internet brought with it widespread excitement and internet-based companies saw meteoric growth leading to rising stock prices in the late ’90s.

After its peak passed though, many companies saw stock prices plummet. Although this might look bad at first glance, the internet boom eventually found a stable equilibrium, and today many million-dollar companies are internet-based.

NFTs will eventually find their own equilibrium and separate from the multitude of penguin and rock NFTs currently making waves, many companies are already taking advantage of it.

Real estate tokenization is slowly solidifying itself in the industry with many companies linking real-world sales with blockchain tokens. The Axie Infinity game is also having real-world effects especially in poorer economies and lifting many people out of poverty amidst a global pandemic.

Ifeanyi Egede is a cryptocurrency researcher and content writer with published works on Bitcoin.com News, InsideBitcoins.com, and BSC News.

View all posts by Ifeanyi Egede 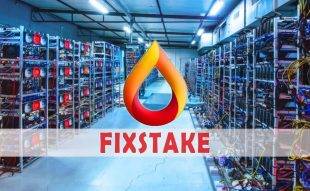 How to Mine the Best Cryptocurrency with FixStake

The fact is, the world of cryptocurrency has taken over every aspect of our ...

Ali Raza •Updated: 17 January 2022 Updated:: Updated: 17 January 2022
View All News
Note that the content on this site should not be considered investment advice. Investing is speculative. When investing your capital is at risk. This site is not intended for use in jurisdictions in which the trading or investments described are prohibited and should only be used by such persons and in such ways as are legally permitted.