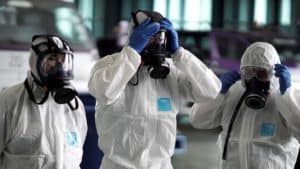 The TRON Foundation has had to make some drastic changes to one of its upcoming events in the wake of the coronavirus. The firm’s niTROn Summit, which was supposed to hold between February 26 and March 1 in Seoul, South Korea, has now been postponed indefinitely as the country has been severely hit by the global pandemic.

The Summit is on Hold

According to a notice published on the niTROn Summit’s website, the firm has made the decision to suspend the event for the time being, while new dates for it will be announced in due time as they continue to keep an eye out for the progress made in combating the virus. The niTRON Summit is considered to be one of the most important events in the yearly calendar for the popular cryptocurrency firm. However, given how things have turned out, the smart move was definitely to keep a lid on it for the time being.

South Korea has especially struggled to contain the outbreak of the latest global pandemic. As the virus continues to spread across the globe (it is now available on every continent except for Antarctica), nations like South Korea, Italy, and China have been particularly affected. The number of novel cases in the country has passed 2,000, and given how quickly the virus seems to be spreading, things could get worse.

As the notice confirmed, the TRON Foundation will be providing refunds to everyone who had purchased tickets as well as a few options such as the chance for ordinary ticket holders to upgrade to V.I.P. tickets for free, an additional free V.I.P. ticket for currency V.I.P. holders, as well as an extra ticket for people looking to purchase tickets until April 11.

Sun’s Publicity Gambit Was All for Naught

The turnout for this particular event has been a tad comical, especially given how the TRON Foundation had decided to promote it. Company chief executive Justin Sun drew the ire of many, earlier this month – as he so often does – after he was accused of capitalizing on the death of basketball star Kobe Bryant in a bid to drum up popularity for the event.

In the wake of Bryant’s death on January 25, Sun posted a picture of himself with the 5-time N.B.A. champion on Twitter along with the message, “Kobe, it was great to have met you in niTROn 2019. Mtg (meeting) you was one of my life’s greatest honor & privilege, I’ll forever remember us on stage discussing the future of blockchain. We’ll have a moment of silence in your honor during niTROn 2020. R.I.P.”

Many in the space immediately called him out for his antics, with people calling him a “Psychopath” and a “sick individual” who was trying to use Bryant’s death to drum up publicity for his event. Another attempt at quick publicity drew the ire of the crypto community. This time, it was related to the virus itself, as a January 29 tweet from Sun showed him with astern face while he and some aides distributed face masks.

“Fighting #coronavirus! #TRON is on the way! Wuhan, we are with you! Stay strong! @Tronfoundation,” he captioned the pictures, thus trying to paint himself as a compassionate man.

Again, the picture got him in trouble, with commenters calling him out for trying to use a deadly global issue as bait to sell his coin.