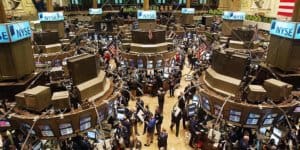 The United States Securities Exchange Commission (SEC) has paused the trading of shares of a small China-based company called Zoom Technologies, based on concerns that investors may be mistaking it for the renowned teleconferencing app inventor company, Zoom Video Communications.

The clamp was enforced on Thursday, and the SEC announced it in a tweet on their official page, warning investors of the mix-up.

Interest in the Zoom teleconferencing shares surged as their securities value increased due to the stay-at-home directive that is being implemented to curb the spread of the coronavirus pandemic. More people are having to use the teleconferencing app to get in touch with their loved ones and work colleagues, and this surge is boosting the Zoom asset’s value on the stock market.

The increased demand sent the share price of Zoom Video Communication from below $80 in January to an all-time high of $159.56 on March 19. Similarly, Zoom Technologies’ share price rose to $24.20 Monday, and ended at $10.40 on Wednesday, up from a close of $3.53 a month earlier.

Last April, too, the business got a boost around the time Zoom Video was going public. The SEC’s major concern is that Zoom Technologies has not submitted a public disclosure statement since 2015. The company is reportedly into developing games and electronic components for mobile phones.

Zoom Technologies’ market value? $31.3 million, while Zoom Video is worth more than $39 billion, so the confusion has diverted some of Zoom Video’s growth into ZPpm Technologies.

The mix-up is due to the tickers used on the stock markets, most likely. Tickers are sequences of letters or numbers used by stock exchanges in a shorthand format, often abbreviations, for reference firms.

On NASDAQ, the ticker for the Zoom Video Technologies company is $ZM, while the one for the China-based Zoom Technologies is $ZOOM.

According to data from analytics firm App Annie, Zoom sits atop Apple’s rankings for the most popular free apps in dozens of countries. Yoga instructors, college professors, party planners, everyone’s using the Zoom app right now, and that’s doing magic for its numbers on the market. According to a price-to-sales ratio of 8 for Microsoft, the company sells for 58 times revenue, and it has risen 26 percent since February 19, while the S&P 500 has sunk 32 percent during that period.

Zoom Technologies used to trade on the Nasdaq Stock Exchange but delisted itself in 2014 because, according to a press release from the time, it “no longer qualifie[d] as an operating company,” among other factors.

The SEC suspension on Zoom Technologies’ share trading will last until April 9, 2020.

Kraken, one of the world’s first and biggest exchanges, has recently revealed a user ...