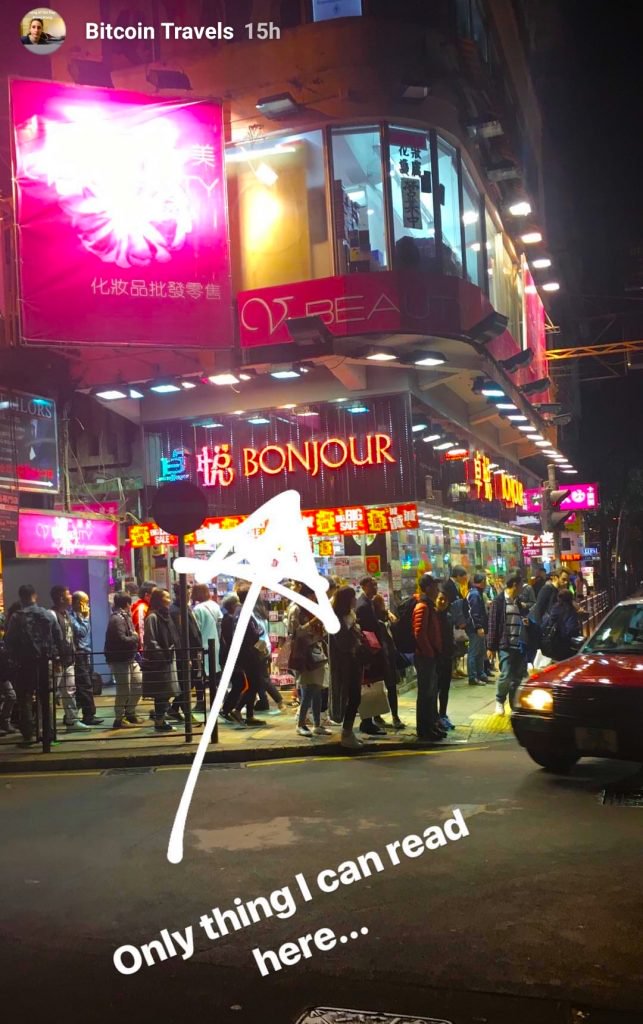 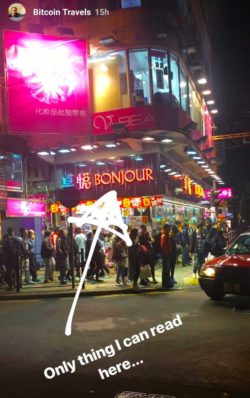 Money20/20 Payments Race winner Amélie Arras has officially begun her quest to prove bitcoin’s superiority over other payment methods — for the second time in six months. Off and running after flying from Heathrow to Hong Kong, Arras is looking forward to a new set of challenges — not least of which is the language barrier.

The Race Is On, in Hong Kong

Five competitors are racing from Hong Kong to Marina Bay Sands in Singapore in time for the Money20/20 Asia conference. Each is assigned a single payment method they must use exclusively to get from start to finish. Other than bitcoin the competitors will use methods like tap and pay cards and gold bullion.

There is also a list of challenges along the way — usually involving sightseeing activities. Competitors are all experienced vloggers so there’s extra pressure to be entertaining.

Arras said language could be the toughest issue this time. English isn’t such a problem in (central) Hong Kong or anywhere in Singapore, but there’s a lot of territory in between — China, Vietnam, Thailand and Malaysia.

I have been in #HongKong for less than 24 hours and already every time I ask about bitcoin I get a reaction like … Bit… Bit… What? #M2020Race @fintechf @money2020 @Coinfloor @Blockchain #Asia #Travel #Bitcoin #BTC #BTC @obi @bobbyclee $BTC #crypto #teambitcoin pic.twitter.com/nlCPc0TjbI

Why Bitcoin Won Before, and How it Could Again

If the notion of bitcoin beating out other more established and accepted payment methods seems far-fetched to you, here’s one explanation.

Bitcoin (and Amélie) won the Payments Race in North America last October thanks to bitcoin’s versatility and community. Each racer may use only one method, and that’s where the others occasionally come unstuck. Credit/debit cards might be accepted nearly everywhere these days, but if you find the one place that can’t take them, what’s your backup?

Since bitcoin must be shoehorned into most payments anyway, it’s rare to find a situation where it’s completely shut out. And unlike cards, you can use BTC to pay other (non-merchant) individuals.

“Anyone with a smartphone” is potentially a help, Arras said in a video at the start of the race, musing on her chances of finding a smartphone user in each country. In North America she had to convert a few people to bitcoin on the spot, downloading mobile phone wallets and sending them their first-ever BTC.

All I need to travel only using bitcoin is people, and these people all they need is a smartphone, and a digital wallet.
So… Bitcoin winning combination will be: +#M2020Race #TeamBitcoin #Bitcoin $BTC @coinfloor @Money2020 pic.twitter.com/NLtTI95dld

Several bitcoiners in active Asian chat groups have offered to exchange Arras’ BTC for local currency — however that’s against the rules, which state she must pay with BTC directly for her travel-related goods and services. Not only must she find people willing to accept BTC, but they have to be people who can provide something useful — like a lift to the airport, or something to eat.

Can Bitcoin win the Payments Race one more time? How? Let’s hear your thoughts.