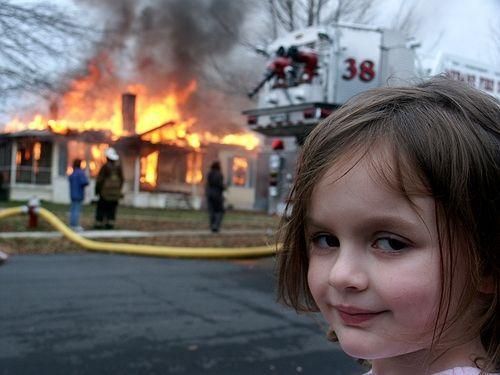 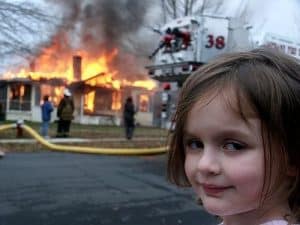 It seems meme owners are now embracing the Non-fungible tokens (NFT) industry more as a meme dubbed ‘Disaster girl’ just sold for $430,000 in an auction.

The Disaster girl meme, which features a four-year-old girl smiling slyly into a camera as a house burns down behind her, sold after it was listed on April 16 for a 24-hour auction.

The image of the Disaster girl named Zoe Roth, who is now aged 21, went viral after it was taken in 2005 by her father.

It was first entered into JPG magazine’s “Emotion Capture” contest, where it was posted on the website and after that became one of social media’s popular memes at the time.

Years after, and thanks to NFT, Roth and her father found a way to make money off the viral image. Although Roth was skeptical at first after receiving an email that encouraged her to sell the meme, she later succumbed and decided to give it a try.

NFTs are unique digital collectibles cryptographically secured in the blockchain network. They can be digital art, trading card, music, and so on.

The “Disaster Girl” NFT was built so that Roth keeps the copyright, and, each time it is bought, she receives 10% of the sale. Such a move puts her in control of the viral image for the first time in nearly 16 years.

However, the Disaster girl meme is not the first to earn from selling her creation as an NFT. Many meme owners have done so in the past.

Chris Torres was one of the first meme-makers to earn from NFT. His Nyan Cat meme, an illustration of a singing gray feline with a Pop-Tart for a body flying through space, went viral back in 2011 and sold for roughly $590,000.

Since then, Torres has bought other NFTs and has helped other meme creators sell their images by hosting online auction events where classic memes are being sold on the blockchain by their original creators.

Another notable NFT meme is Grumpy Cat, which was auctioned for $100,859.54. The Grumpy Cat NFT was based on a photo of internet star Tardar Sauce, the original grumpy cat that won people’s hearts back in 2012 when her picture was first posted online. She died in 2019.

Ethiopia Teams up with Cardano to Deploy Country’s Largest Blockchain