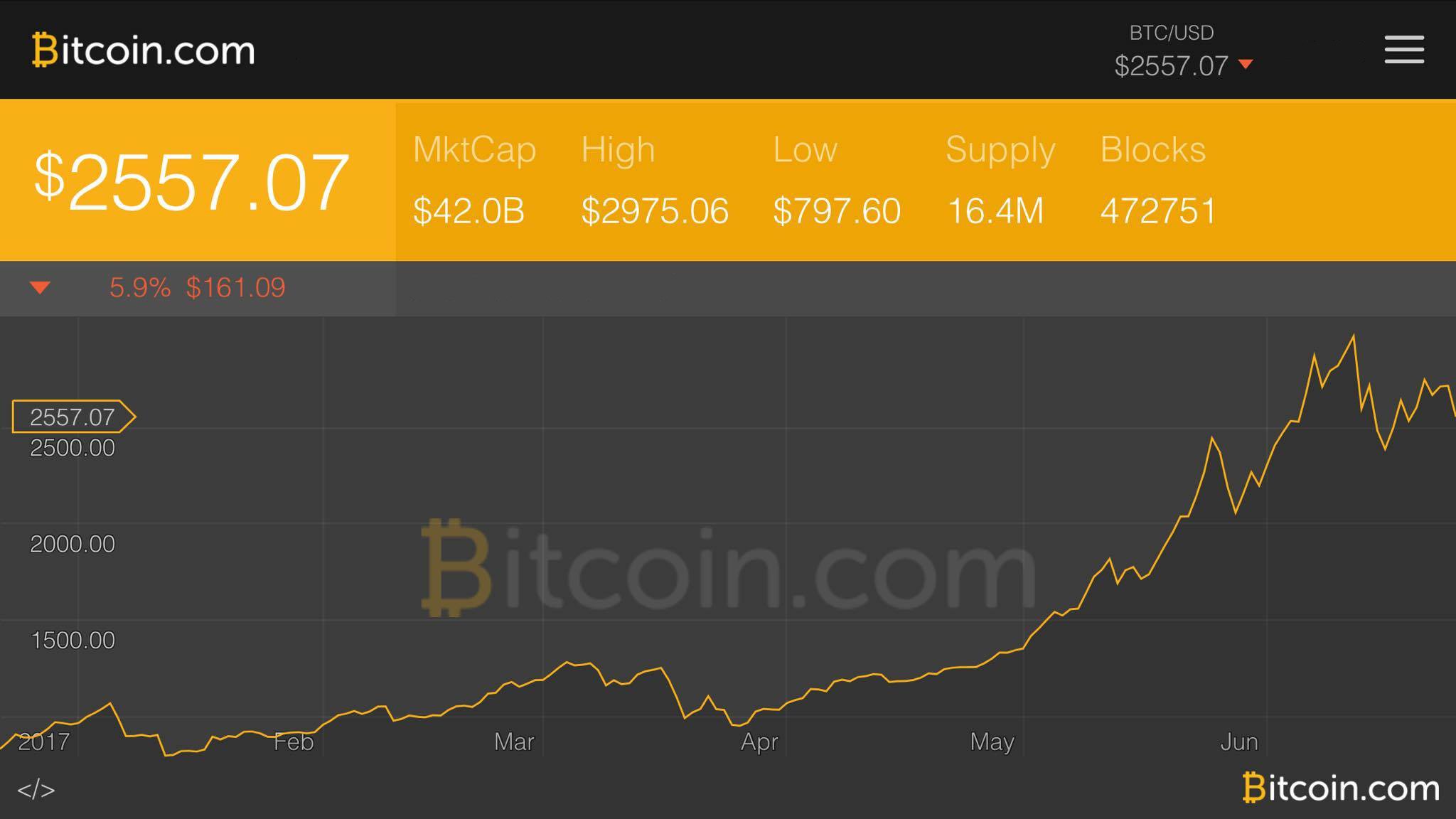 Also Read: Scheduled Scaling Updates for the Bitcoin Network Are Getting Closer

As bitcoin maintained the $2700 average, a few bitcoin traders were probably getting bored because the price didn’t show much movement. However, bitcoin’s value fell against the U.S. dollar five solid legs down starting at 10 am EST on Saturday. After taking a steep drop and coming close to going below the sub $2500 range the price of bitcoin bounced back a leg up to $2585 but has since been consolidating around the $2530 territory.

Bitcoin trade volume has been lower which is typical on the weekends hovering at $979 million in 24-hour volume at the time of writing. Market dominance for BTC has been holding steady at 39 percent due to lower ethereum prices. The price per ethereum after last week’s ETH market flash crash has been holding just above the $300 range. As of right now both bitcoin and ethereum markets are experiencing a bearish sell-off and are trying to find a solid floor.

Looking at the 24-hour charts, the 100 Simple Moving Average (SMA) and the longer term 200 SMA have crossed hairs, and the 100 SMA is now a touch below the 200 trendline. The retreating price hasn’t found channel support just yet, but it looks like we may be sitting at least above the $2500 territory for a few hours. Relative Strength Index is heading down confirming the current seller’s market, and stochastic indicators also show bearish sentiment which will likely continue for a bit. Day traders will find easy scalps and breaks during these times as the price should show some profit taking shake-ups.

The weekly news has been interesting as there have been numerous headlines about the decentralized currency lately. For instance, the Indian government just revealed it would soon be regulating bitcoin, and the news may lead to some positive developments in the region. In other news, the scaling proposal Segwit2x saw massive hashrate support this past week, and some believe bitcoin just might upgrade in the near future. Traditional markets like stocks and bonds have been quite shaky over the previous two weeks, and the recent ethereum market flash crash seems to have all altcoin markets in a frenzy.

For now, bitcoin’s price is trying its best to stay within the $2520-2540 territory but is struggling to hold solid ground. From the looks of the weekly chart and Fibonacci extensions, we could see dip lower into the 2400 zone if bears continue to shake up the market. Alternatively, the price could push upwards after a short period of profit taking and try to breach the $2800 levels once again. Asian and European markets will decide where the next twelve hours will lead us as they could buy the dips or we continue seeing Judas candles.

Bear Scenario: Order books show at the moment there should be a sound base around the $2450 vicinity. However, there are a lot of short positions contracts betting the price may go lower back to the $2200-2300 range. Back to $2100 would be worst case scenario looking at the playing cards at press time.

Bull Scenario: The price could catch some upward momentum during the midday hours of trading for Asian and European markets. We

Join Our Telegram channel to stay up to date on breaking news coverage newsBTCPSA: ...