Homenewskraken sees 100000 eth staked in it within four days alone 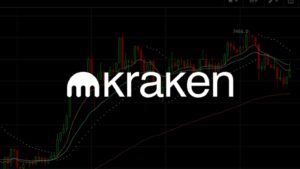 The ETH 2.0 taking service had been launched just four days ago, and it seems Kraken, a US-based crypto exchange, had gained a sizable share of that, with over 100,000 ETH deposited into the exchange, which is worth over $60 million.

Kraken Proud Of Its Pro-ETH Heritage

This massive milestone occurred on the 8th of December, 2020, and the exchange itself had estimated that the staking services within it stand for around 8% of the entirety of staked ETH on ETH 2.0. The exchange anticipates anything from 5% to 17% when it comes to this service’s APY.

Jeremy Welch stands as the Vice President of Product at the Kraken exchange, and stated that the exchange itself has supported Ethereum for a long time. He highlighted how Kraken stood as the first major exchange to list Ether half a decade ago, back in August of 2015.

Indeed, Welch made note that Kraken boasts a sizable amount of ETH trading volumes, stating that the second-biggest cryptocurrency manages to gain trading volumes of anywhere between 15% to 40% of Bitcoin’s volumes.

Kraken isn’t the only major exchange out there offering staking services for ETH 2.0. Big names like Huobi, Binance, and Bitcoin Suisse have all launched their respective staking services in this week alone, with others soon to follow. Coinbase is expected to enter the arena come early 2021, and OKEx is already expecting its services by the end of the month.

What this means for ETH staking, is that a sizable percentage of the entire staking system could be centralized across these major handful of crypto exchanges.

Another major announcement comes by way of MyEtherWallet. The Ethereum wallet interface announced that it would integrate the Staked staking dApp into its interface. From there, users of MEW can stake Ether by way of its web interface, or simply use its android wallet application.

Tim Ogilvie stands as the CEO of Staked, and gave a comment about the matter. He explained that many regard MEW as one of the original Ethereum wallets, something he claimed is rightly so. As such, he deemed it only fitting for users of MEW to stake their holdings through the MEW infrastructure.

The Beacon Chain for ETH 2.0 had been launched at the start of this month, allowing users to stake their funds for returns. It should be noted, however, that stakers won’t be able to withdraw their tokens until it’s enabled at a later point in time.

Join Our Telegram channel to stay up to date on breaking news coverage Kain ...