The global markets have taken a deep plunge, carrying the cryptocurrency market with them. With a consolidating pace, the market seems to show signs of volatility, while ending up within the same price range.

However, as confusion and fear take over the industry, it is still being noticed that these digital assets don’t seem to be losing numbers in terms of community strength even during this bear market. Surely, this doesn’t mean that it is the same for every cryptocurrency.

While several top cryptocurrencies did manage to survive the crypto winter, a huge number of tokens were seen to slowly die out. This sparked debates about the future of the token for several months. The internet too is being seen in splits where two parties have different opinions regarding various blockchain concepts like NFTs or Defi.

Organizations that have previously slammed the entire concept of integrating blockchain to the day to day life have now started embracing the industry while hoping to somehow participate in it.

Several nations have been discussing and stating their strong opinions on these digital assets on a global level. While America and Europe seem to have a rather positive outlook towards them, countries like China showed their disinterest in the same.

However, the Indian Government, which was previously known to be critical of the industry, recently cleared up the air around the topic by stating that they would also like to be a part of the sector. This has led a majority of Indian investors to believe in the growth of cryptocurrency.

A recent study by crypto exchange Kucoin revealed shocking statistics. The previously uninformed country has started to make major progress in the adoption of cryptocurrency in the past two years. The study revealed that, out of 115 million investing citizens, a whopping 56% believed that cryptocurrency had potential and could become the future of finance.

The report came out as a surprise for the major financial institutions as it seemed to display financial maturity. With a majority of the cryptocurrency investors seen to be in their 20s, around 54% of them believed in holding on to their assets for long-term gains. It also showed that another 10% of the investing citizenry may be added to the blockchain industry in the upcoming months.

While all these statistics seem to be proof of the industry’s growth in India, they also showed that over 41% of these investors lacked sufficient knowledge in the field. There was also a decent chunk among them who stated to have difficulties in managing risk while participating in the market.

The study was conducted by Kucoin as a part of its “Into the Cryptoverse, India” program. Since India is being considered a major potential player in the industry, companies have been trying to gain insights into the same regularly.

Regulations and other policies

Cryptocurrencies have been historically looked at by major national and international financial institutions as a threat, or “unspeculative” area of economics. The nature of blockchain allows complete financial freedom to the masses; something that could be exciting for people, but also highly risky.

India had kickstarted its plans to regulate cryptocurrencies in 2020. The ministry had previously taken to the Supreme court in hopes of banning the asset class, fearing various frauds and money laundering issues in the future. However, the court ruled in favor of blockchain and crypto enthusiasts, putting pressure on the government to find a way to regulate it safely.

On February 1st, the Finance Minister of India stated in her budget plans, that the government shall start taxation on cryptocurrency trading from the following year. Thus, since April 1st, cryptocurrency trading in India has been taxed at a massive rate of 30%. This was contested by many, seeking to get relief from the heavy amount. But the finance ministry is yet to address them positively.

The 2021 bullrun has definitely created a lasting impact on the investors in India. Educational courses and exhibitions about cryptocurrency and the blockchain industry, in general, is on a rise, pointing toward the masses learning about these assets. Overall, India has managed to stay updated in terms of technological growth, also owing to support from the government.

Amidst such a bullish approach from India, a project created by an Indian team has been gaining immense popularity. Battle Infinity, the P2E game platform has managed to gain a huge community thanks to its unique and innovative features.

As a platform that focuses on one of the most hot topics in India, fantasy sports games, Battle Infinity bring the added benefit of being blockchain based. The project boasts some of the top features as a contender to already existing giants like Dream 11 or MPL, while being completely integrated with the metaverse. The native token of Battle Infinity IBAT, has recently gained massive exposure too, as it got listed on Lbank exchange recently. 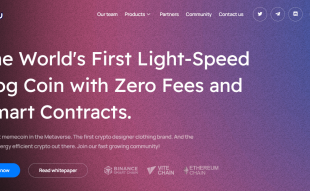 Join Our Telegram channel to stay up to date on breaking news coverage CoinMarketCap, ...