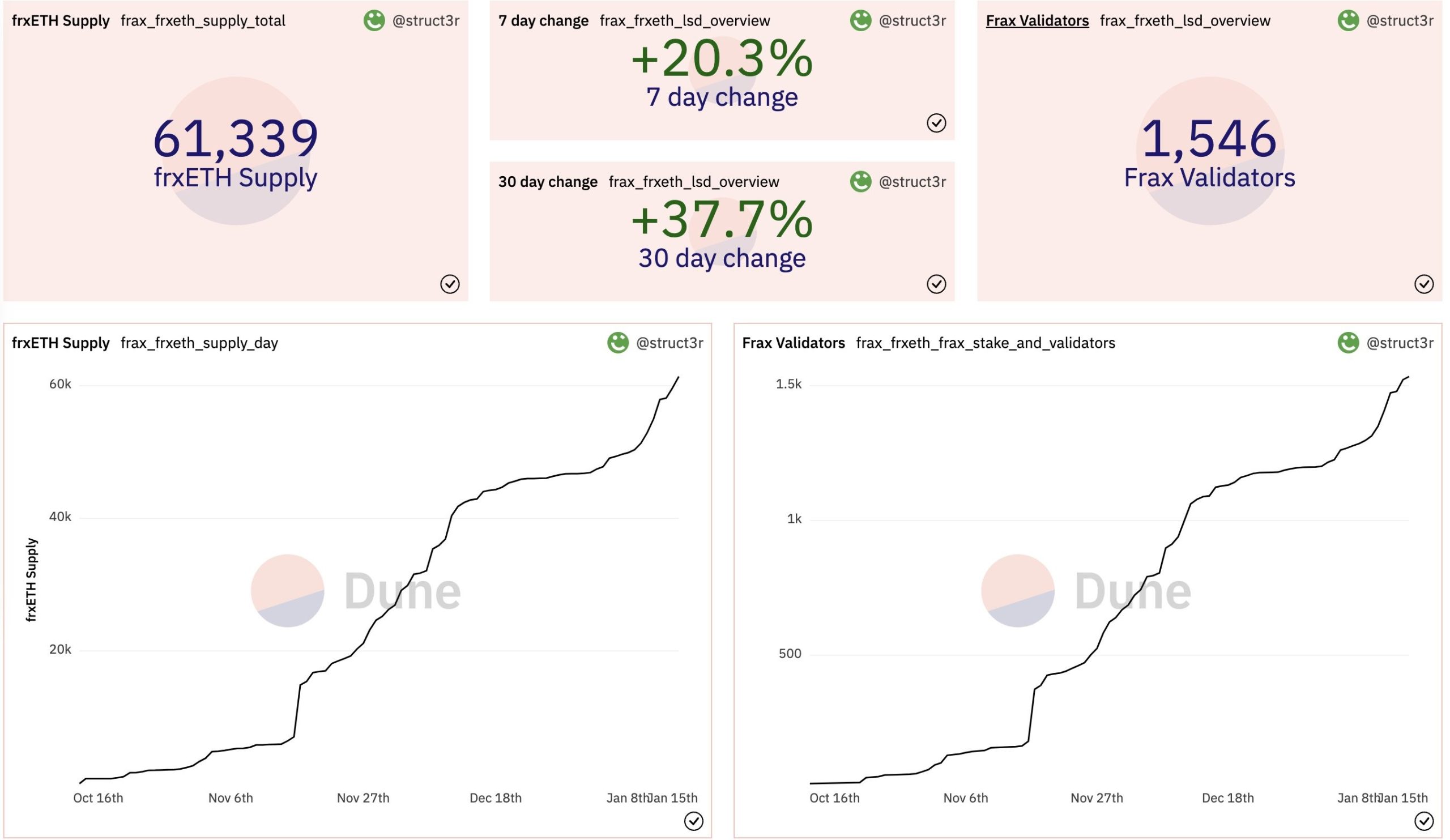 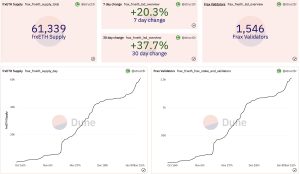 Frax Share, the first crypto native CPI platform, has sustained a winning streak for more than two weeks. In the last 24 hours, the ecosystem’s native token, FXS exploded by 35% to trade slightly above $9.00 at the time of writing. The bullish price action seems not to be anywhere near the elastic limit, considering a rectangle pattern breakout likely to reach $11.36 in the upcoming sessions.

Ethereum staking on Frax Share appears to be the main force behind the rally that has seen interest in FXS pick up the pace. According to several Twitter posts, Frax Finance now has over 61,339 ETH staked in the smart contract. Investors are finding staking on Frax Finance more lucrative compared to other similar platforms in the market. Based on the chart below, Ether staked on Frax Finance saw a 20% positive change in one week, translating to a +37.37% change in 30 days.

According to OxChaos, a platform built around key market fundamentals, “FXS (is) ripping as market realizes no one will be able to compete with Frax’s staked $eth yields & are trying to be the $eth basepool on Curve.”

(2) 0xChaos on Twitter: “Congrats @fraxfinance on hitting 60k $frxEth … Seems like only last week we were just celebrating 50k milestone 🤝 $fxs ripping as market realizes no one will be able to compete with Frax’s staked $eth yields &amp; are trying to be the $eth basepool on Curve — $cvx $crv 🎡 https://t.co/y8ZRCSRr6i” / Twitter

Insight from Deesontralize, a venture founder on Twitter, reckoned that “valuation can hit over $1b once eth staked surpasses rocketpool.” He suggested a community vote to increase the loan-to-value (LTV) ratio to 85% to “help leverage borrow more crvusd to loop it back into fraxbp (leveraged amo stablecoin on stablecoin position) to really crank up crv farming to boost fxseth/eth pool.”

(2) Deesontralize on Twitter: “@0xCha0s @fraxfinance Once fraxbo is the only asset that can collateralize for crvusd — dump it for say… 0.993 or whatever for more frax/usdc to increase the size of the amo. Larger assets in frax/usdc = larger take on crv tokens which will be useful to drive more returns for fxseth/eth pool.” / Twitter

Frax Share popularity is bound to grow following the Ethereum Shanghai upgrade, hopefully in Q1 2023. Investors will for the first time withdraw the ETH locked in the Beacon Chain smart contract.

There is a high probability demand for staking platforms like Frax Share will rise as investors seek alternative places to lock up their Ethereum holdings. The FSX token will also benefit as demand increases from investors buying Ethereum for staking purposes.

(2) Hal Press on Twitter: “I’m slightly late to this one but I’ve been digging into FXS and I like it. Seems like there is genuinely an underappreciated fundamental story here and ETH withdrawals are the perfect catalyst to bring this to light. Will have more detailed thoughts later.” / Twitter

Frax Share price respected the confines a wide rectangle pattern for months since June before successfully breaking out over the weekend. Rectangle patterns do not have a bullish or bearish bias. However, cracking through the upper resistance, often opens the door to a sharp northbound move.

As observed on the chart, the breakout target, 48.13%, is equal to the rectangle width extrapolated above the breakout point. Since Frax Share price has already moved approximately 16.50% above the pattern, it means that there’s room for growth that could see it tag $11.36 in the upcoming sessions or a few days.

The position of FXS above the three major moving averages, starting with the 50-day Exponential Moving Average (EMA) (in red) at $5.53, the 100-day EMA (in blue) at $5.56 implies that buyers have the upper hand and will likely hold the reins over the coming weeks.

Traders willing to bet on long positions in Frax Share price may continue to do so if the 50-day EMA crosses above the 100-day EMA. Moreover, the Moving Average Convergence Divergence (MACD) indicator reinforces the bullish outlook for FXS with a buy signal and its position above the mean line.

It is worth mentioning that Frax Share price could retrace to collect more liquidity before extending the breakout toward $20.00. Therefore, investors should not worry if FXS pulls back from the current market value as it may allow more sidelined buyers to throw their weight behind the rally.

Altcoins To Consider for Quicker Returns

The Frax Share price train may have left the station early, leaving many investors behind. However, there are many other investment avenues investors may consider, including new crypto projects in their presale stages.

Besides fronting solutions that could shape the crypto space’s future, these presales offer tokens at a bargain and will likely rally after listing on exchanges for the first time.

Players have consistently demonstrated readiness to put both their finances and time into crypto games they find entertaining. The goal of Meta Masters Guild (MMG) is to create a gaming atmosphere that encourages a thriving in-game economy while developing superior web 3.0 games.

The initial game developed by Meta Masters Guild centers on racing in the metaverse through a high-end kart racing experience. Players will belong to one of the three factions available: cyber, punks, and apes, and they will compete against each other to achieve dominance and earn rewards in the form of the MEMAG token.

In all #MEMAG games, you can use your in-game rewards 'Gems' or $MEMAG tokens to buy & upgrade your characters 🦾

These rewards will be implemented in the Meta Masters Guild Store – coming soon! 🔜

The project aims to establish itself as a leading play-to-earn racing game in the near future, focusing on gaming, earning opportunities, and NFTs as integral elements of its ecosystem.

Meta Masters Guild presales kicked off with a bang, raising $251k in no time. Investors are spending 0.007 USDT on 1 MEMAG token.

This is a groundbreaking cryptocurrency platform that is revolutionizing the fitness industry. FightOut merges the functionality of a fitness app with the convenience of a chain of gyms, creating an unparalleled experience for users.

Not only can users earn rewards for completing workout challenges, but they also have the opportunity to become part of a dynamic community. The platform runs on a tokenized economy, where users can earn FGHT tokens for completing M2E tasks.

(2) Fight Out on Twitter: “The Fight Out metaverse is where you can see the progress of your digital avatar as it develops directly as a result of your own effort and progress! Get ready to take on even more challenging tasks as you grow stronger! 💪 Learn more at https://t.co/z34Nkx3ffi! https://t.co/Ep5T8qJzns” / Twitter

FightOut is taking the industry to new heights by integrating Web3 solutions, enabling users to create digital NFT avatars for use in the metaverse. This cutting-edge technology has the potential to change the way the fitness economy operates, making it more accessible and interactive than ever before. Join the FightOut movement and take charge of your health today.

FightOut’s presale raises $2.9 million as investors rush to capitalize on a 50% bonus which expires as soon as the first $5 million is raised. 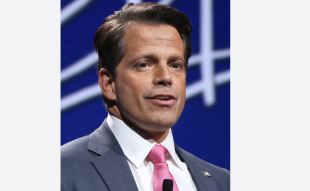 Join Our Telegram channel to stay up to date on breaking news coverage Anthony ...