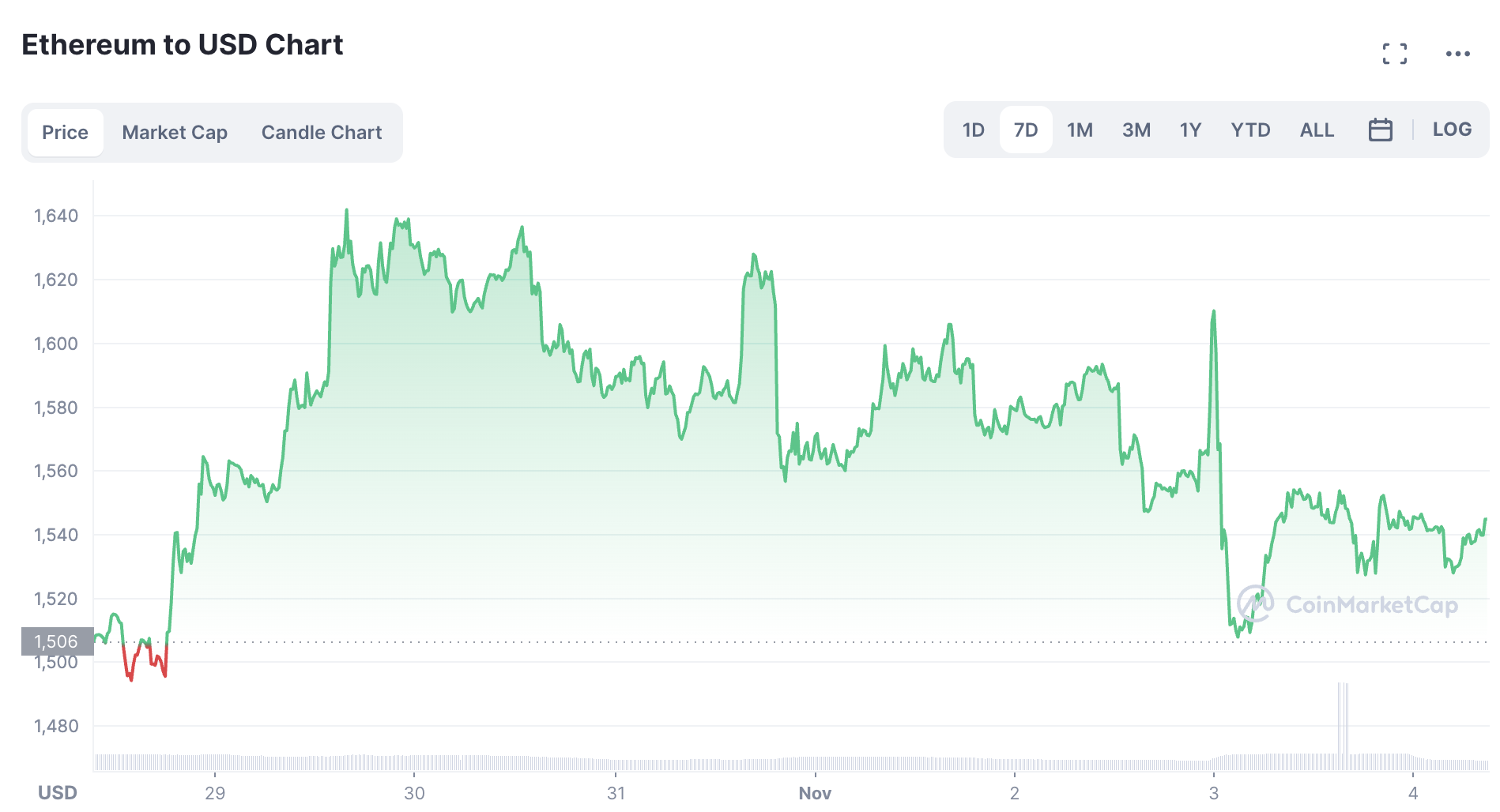 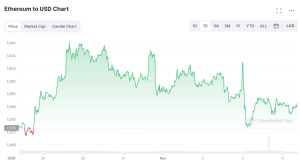 As a result of the Federal Reserve increasing interest rates, the price of Ethereum has decreased by more than 2% in the previous 24 hours, and it is currently trading at $1,547 as of November 3. The total value of the global cryptocurrency market cap dropped by less than one percent to $1.01 trillion the day before, putting prominent cryptocurrencies into negative territory.

It was generally anticipated that the Fed would spike the interest rates by 75 basis points, and the rest of that increase had already been built in, which limited the crypto market’s losses. The market will focus its attention, for the moment, on the non-farm payroll numbers that are scheduled to be released on November 4 in the United States.

The Federal Reserve hiked the interest rates by another 75 percentage points on Wednesday, marking the most significant move toward tightening monetary policy in the past four decades. The Federal Reserve has stated that further rises in the cost of borrowing money are required as part of the Fed’s strategy to combat inflation.

The policymakers were given the discretion to continue raising interest rates if inflation did not begin to drop, yet at the same time, the message allowed for future rate rises to be implemented in smaller increments.

This may imply that the Federal Reserve will stop its string of rate hikes of three-quarters of a point as soon as December in favor of more moderate rises of potentially half a percentage point.

The benchmark interest rate for overnight loans offered by the central bank was raised by 0.75 percentage points, reaching its peak since January 2008 which was between 3.75%-4%. The anticipation in the market for this action has been building for some weeks.

Since the early 1980s, when the time inflation was high, monetary policy has not been tightened this significantly in recent history. The increase in interest rates had been expected, and the market participants were looking forward to hearing that this would be the last 75 basis point increase.

What Kind Of Impact Has This Had On The Price Of Ethereum?

The price of Ethereum is currently at $1,552, while the 24-hour trading volume is currently at $24 billion. Ethereum has lost all of its gains over the course of the past week, and its price is currently down by more than 1%. On CoinMarketCap, Ethereum is now placed in second place, with a market value of $190 billion. This figure has decreased from $194 billion only one day ago.

The ETH/USD exchange rate left the ascending range that had been providing support at $1,550 after the Fed rate rise. At this point in time, the same mark is functioning as a barrier, maintaining a negative bias in place for ETH.

Indicators like the relative strength index and the moving average convergence/divergence (RSI/MACD) on Ethereum’s price chart on CoinMarketCap point to a bearish bias, while the 50-day moving average is prolonging resistance within the same level. ETH may be directed toward the resistance level of $1,660 if a bullish breakout occurs over $1,550. Subsequently, a bullish crossing occurring above $1,660 will propel ETH to either $1,720 or $1,805. On the other hand, closing candles that are lower than $1,550 has the potential to drive ETH lower today to either $1,480 or $1,404.

The crypto market is getting uncertain by the day as certainty emerges about the regulatory body’s stance on speculative assets. That makes it important for those looking for major gains to invest in presale crypto assets that, at least for now, aren’t slaves to the volatility of the crypto market. Dash 2 Trade is one of those presale projects. Currently, in the second phase of the presale, Dash 2 Trade presents a case of making definite gains for early movers as they can bank upon a highly likely listing pump after the presale’s conclusion. Join the presale today to get started.