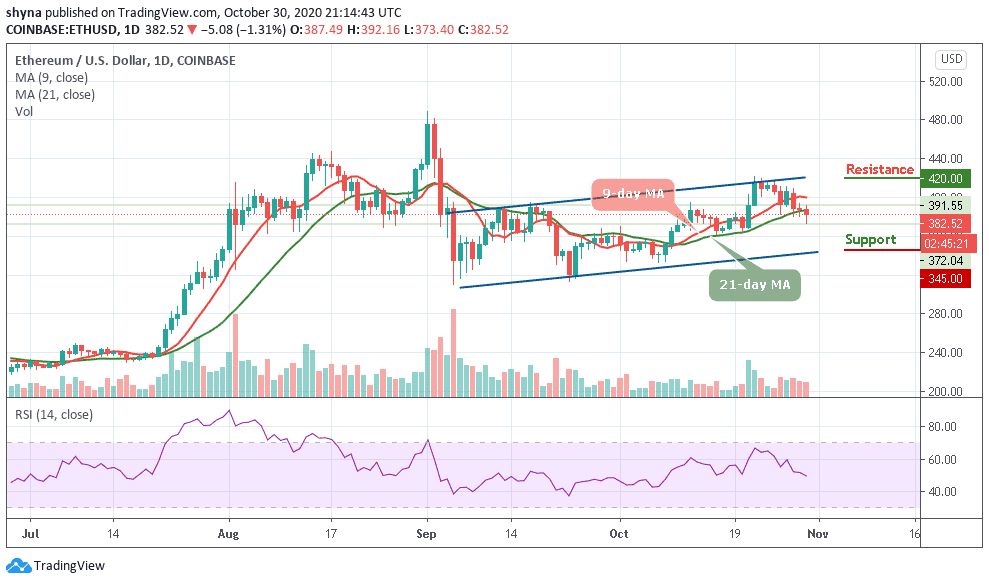 The price of Ethereum may be saying good-bye to the resistance level of $400 as sentiment turns bearish.

Toward the end of last week, ETH/USD surged higher from 368 as it climbed above the $400 level and managed to reach as high as $421. More specifically, the coin was unable to close a daily candle above the $416 resistance which caused it to drop beneath $400 on the next day.

What to Expect from Ethereum (ETH)

A couple of days ago, the buyers did attempt to recover as they spiked into the $409 resistance but later dropped below the $390 support. However, the sellers return today to push ETH into the $380 support. The support here is further bolstered by the 21-day moving average. The technical indicator is facing the south as the signal moves below 50-level.

Looking ahead, if the sellers break beneath $360 and push below the lower boundary of the channel, the first level of support lies at $345. Following this, other supports are found at $325 and $305 respectively. On the other side, if the coin moves above the 9-day and 21-day moving averages, the first level of resistance lies at $405. This is followed by the potential resistance levels at $420, $440, and $460.

Against Bitcoin, Ethereum has struggled heavily this month as it reached a 3-month low today. Earlier in the month, ETH fell beneath the 9-day and 21-day moving averages which happened to be the first sign that there was some downward pressure ahead. Today, ETH is seen dropping beneath the 0.029 BTC.

Looking ahead, if the sellers continue to drive lower, the first level of support lies at 0.0270 BTC. This may be followed by support at 0.0260 BTC and below. On the other side, the first level of resistance may be located at 0.0300 BTC. Above this, further resistance levels are expected at 0.0305 BTC and above. Meanwhile, the RSI (14) is moving into the oversold territory which shows the sellers might be a little overextended.