Enjin Coin, the crypto token that powers Enjin’s ecosystem of interconnected, non-fungible token (NFT)/gaming-focused blockchain-based applications, has been pumping on Wednesday. Amid a spike in trading volumes – which are currently around $170 million in the last 24 hours, according to CoinMarketCap, which amounts to around 44% of the cryptocurrency’s market capitalization – ENJ/USD has risen over 7% on the day.

The cryptocurrency was last changing hands close to $0.3850, having been as high as $0.43 earlier in the session. Profit-taking ahead of the 200-Day Moving Average at $0.44 eventually resulted in ENJ pulling back from intra-day highs. Nonetheless, ENJ’s gains on the month still stand at around 60%.

Enjin Coin has benefitted in tandem with broader cryptocurrency markets from an easing of the macro headwinds that were behind 2022’s viscous drawdown. More specifically, further evidence that US price pressures are easing faster than expected and the US economy is slowing faster than expected is leading macro traders to revise lower their expectations for the Fed’s tightening plans in the coming quarters.

Some traders said that a recent positive announcement from Enjin developers contributed to the pump on Wednesday. Enjin recently released its wallet 2.0 on iOS and Android.

Our first developer update of the year is a big’n!

Not only is Enjin Wallet 2.0 out on iOS and Android, we’ve also got:

Price Prediction – Where Next for ENJ?

It’s too early to say whether ENJ’s latest pump can translate into a longer-lasting technical rally. Yes, the cryptocurrency’s gains since the start of the year have seen it 1) break above a long-term downtrend, 2) break above its 21, 50 and 100DMAs and 3) break above important resistance at $0.38.

However, the failure to get above the 200DMA means that the bulls out to remain cautious. ENJ will need to sustain a push above $0.44 if it is to open up the possibility of a longer-lasting push towards the pre-FTX collapse highs in the $0.52 area, or towards the important long-term support turned resistance done just above $0.70.

FGHT can also be used in peer-to-peer fitness wagers. FightOut’s FGHT tokens are currently selling for 60.06 per 1 USDT, and interested investors are encouraged to move fast to secure their tokens, with the pre-sale having already raised over $3.0 million in just a few weeks. FGHT is the token that will power the FightOut crypto ecosystem.

RIA, the token that will power afterlife fantasy-themed NFT battle card game Calvaria, is also currently in presale. The play-to-earn (P2E) crypto gaming start-up has raised close to $3.0 million in just a few months since the launch of its pre-sale. Only around 12% of its tokens remain up for grabs.

C+Charge has just started its pre-sale of the CCHG token that its platform will use to pay at EV charging stations. Tokens are currently selling for $0.013 each, though by the end of the presale, this will have risen by 80%. Investors interested in getting in early on a promising environmentally friendly cryptocurrency project should move fast, with the project having already raised over $300,000 in just a few weeks since the presale launch. 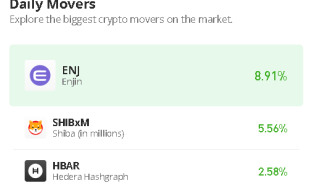