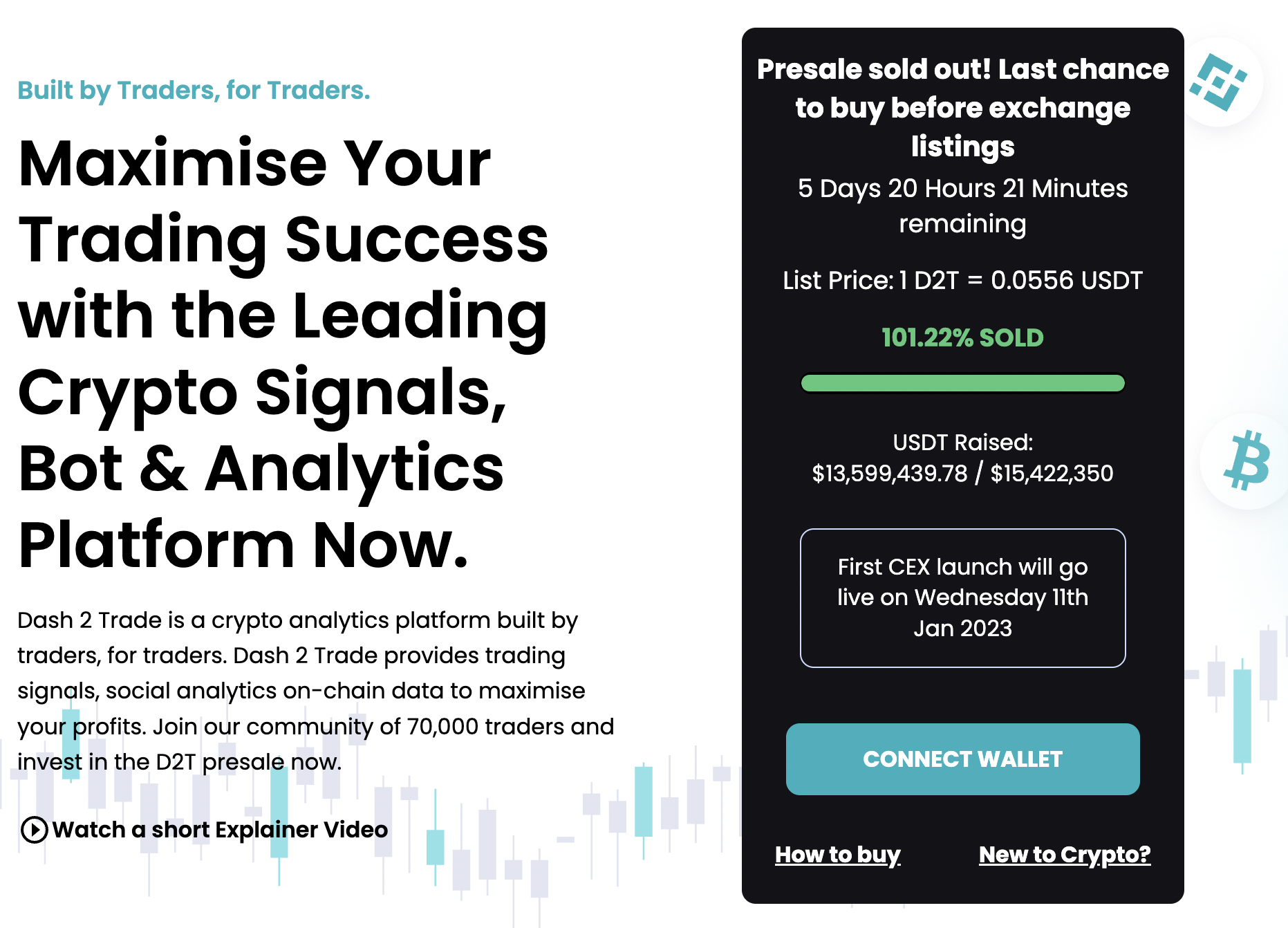 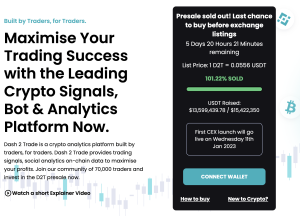 The popularity of the crypto intel platform, Dash 2 Trade, has gotten the notice of tier 1 exchanges, and its native token, D2T, is set to go live on Gate.io on January 11th

But this is not the only good news for the early movers. Dash 2 Trade has also announced that the sell-out presale will be extended for four more days for the over-funding round.

Earlier today, Dash 2 Trade hit its $13.4 million milestone, which was supposed to end the presale round. However, in light of new developments and the desire to give newcomers a chance, the crypto intel platform has decided to increase the time frame for the presale.

As a result, Dash 2 Trade has added a 5th stage to its presale round in which 36 million tokens will go on sale at $0.556. The goal is to raise an additional $2.001 million. Dash 2 Trade has increased the price by 4% in this overfunding round, and the new target is $15. 4 million.

Hitting the presale target ahead of schedule alone is a feat that must get all the appreciation it deserves. But Dash 2 Trade has now put itself in rare categories by extending the presale to help latecomers become early movers. Here are the other reasons overfunding is great for D2T investors.

It Gives the token Time to Get More Tier 1 Listing.

After making it to Gate.io, a Tier-1 centralized exchange, Dash 2 trade wants to further. That means getting more Tier-1 CEX and DEX onboard, an endeavor requiring more market cap – which means more funds.

And the additional fund will also help the token’s liquidity once it finally goes open for trade on Gate.io.

The additional funds will speed up Dash 2 Trade’s deployment

Dash 2 Trade has a complex vision that needs more funding to materialize on time. With the funds it receives from the fifth stage, Dash 2 Trade will progress faster toward its deploy the crypto intel platform. Features such as strategy builder and the backtesting tools – some of this project’s more complex offerings- may start coming out soon.

Dash 2 Trade aims to stay true to the headstart that the venture fund has gifted it by releasing the beta versions of the strategy builder and back tester earlier than anticipated. And the fifth round will help this project achieve it.

Dash 2 Trade’s demand skyrocketed after its first product launch- the presale dashboard’s beta version. You can check out this feature yourself by visiting beta.dash2trade.com and entering your email ID to access the utility. 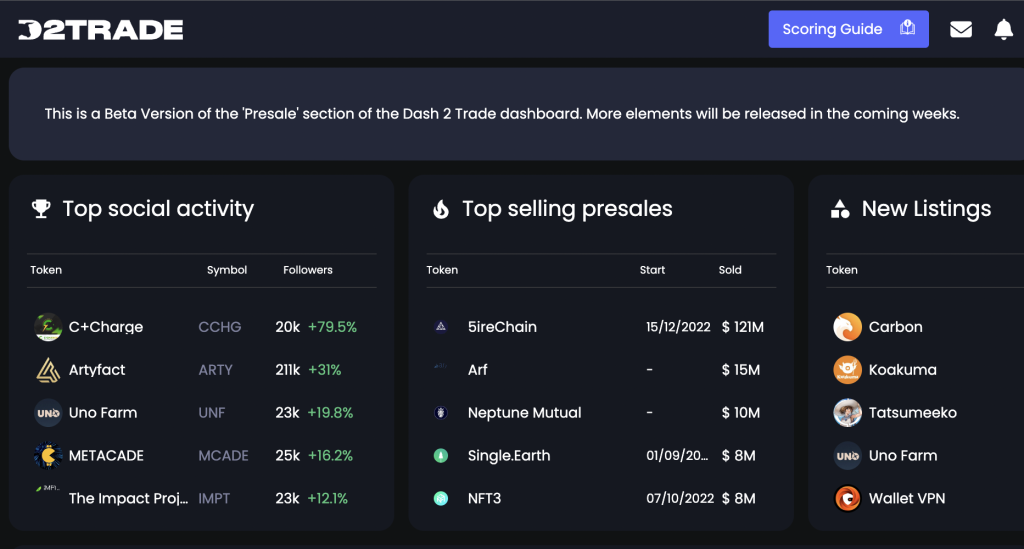 It is a one-of-a-kind tool that devs have specifically designed to help people become early movers on the hottest presale projects. On the dashboard, you will find all the details of the presale projects that entice you, including a dash score. Dash Score is how Dash 2 Trade ranks the upcoming presale project. It is an important tool, especially for those who aren’t clear about which project to invest in.

The number of signups that Dash 2 Trade received after the arrival of the dashboard was amazing. That resulted in the last remaining tokens going off the shelves in the 11th hour, making it clear to devs that more people were interested in the project than they originally thought.

You can gauge the new interest from the fact Dash 2 Trade has raised half a million within the last 24 hours – the project is growing fast, and the tokens are going out faster.

Busy Holidays Made you Miss the Presale – Now is Your Chance

Despite people’s bullishness about Dash 2 Trade, many couldn’t participate in the presale because they were too busy with Christmas and New Year holidays. Dash 2 Trade has, thus, opened the doors to its presale for one more round if you were among them.

This extended presale will also give a chance to those who have just heard about the project after checking out its awesome presale dashboard to participate in the presale.

These are why Dash 2 Trade’s decision to extend the presale is good for everyone involved. And let us now forget those who participated in the presale on the very first day. They will get an additional 4% profit from the latest price appreciation.

As the 14th biggest cryptocurrency exchange by market capitalization on Coingecko and 17th on CoinMarketCap, Gate.io is an all-encompassing exchange with a 24-hour trading volume of more than $200 million.

It and other exchanges will list Dash 2 Trade on the same day – January 11th.

The 5th round gives one more chance for people to make the most out of being an early mover on a project that has the potential to go 10x in 2023.

Where to Buy Dash 2 Trade?

Those wanting to participate in this presale will need USDT or ETH. Fiat investors can buy Ethereum using a debit or credit card at the official Dash 2 Trade website. And if you are a mobile user,  the best option is Trust Wallet, as the website has an in-built Trust Wallet browser.

SolidProof has audited the project, and the team has acquired verification from CoinSniper – which already puts this project as one of the most transparent we have covered so far. 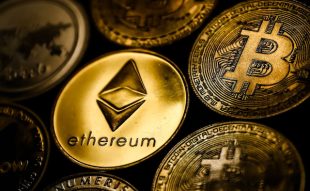 A Billion-Dollar Hedge Fund Is Betting Against USDT, Bitcoin And Grayscale

Join Our Telegram channel to stay up to date on breaking news coverage Grayscale’s ...