Bitcoin’s price dipped to a daily low of $18,000 on CPI day before seeing a powerful rebound that saw it soaring back into the $19,000 mark.

There was a lot of excitement about the CPI data since it showed inflation rising faster than expected, which many saw as a sign of future rate increases from the Fed.

The price of Bitcoin has returned to within 1% of its preceding day’s high after missing its four-hour trendline just the other day as traders speculated ahead of the CPI data. This caused the price to fall earlier today. The relative power of Bitcoin has just surpassed that of the overall stock market. The S&P 500 index fell to a low of 3,491 on the day of the CPI report, but it immediately rebounded and rose to a high of 3,660.

Although the billionaire has not yet made a follow-up tweet, Elon Musk’s late-night tweet of a single word—”$20,000″—suggests he anticipates a near-term recovery of Bitcoin’s price to that psychological support level.

BTC may have recovered more quickly on CPI day if Elon had shown some enthusiasm for Bitcoin at its present price by tweeting about it less frequently and instead focusing on Dogecoin.

Does Bitcoin Have What It Takes To Bounce Back?

Price targets like TraderSZ’s $21,500 from last week are within reach if Bitcoin can retake the trendline in the Bitcoin price chart above.

To the upside, the weekly candle closure places the current range high at roughly $24,300, while the wicks place it at around $25,200.

Chimpzoo, a previous top on Bitmex’s leaderboard, is a Bitcoin bull who thinks Bitcoin can maintain a price over $19,000. In recent news, Bitcoin has closed an hourly candle over $19,000.

There was a recent report on DonAlt’s $29,000 Bitcoin price estimate, but he isn’t the only one who thinks the market is due for a major move to the upside, even if in the form of a bear market rally.

Bluntz, a well-known cryptocurrency trader, predicts that the market will remain sideways for the rest of 2019 and maybe even until 2023.

Have You Invested In This Explosive Presale of 2022?

One technique to combat the severe volatility and whipsaw price movement of today’s market, as well as the sideways trading range, is to make an investment in a fresh token presale.

Investors eyes have been on the IMPT token presale, a new cryptocurrency that has just crossed the $4 million mark in its inaugural seed round fundraising. 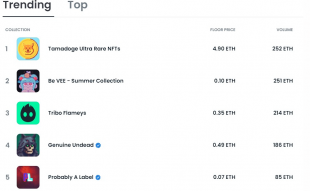