Ever since the advent of Bitcoin, numerous projects have attempted to improve the infrastructure of their coins by deviating from Bitcoin’s consensus mechanism, proof-of-work. Ethereum for example opened an entirely new dimension for blockchain applications when it launched proof-of-stake.

Similarly, many projects tried to play around with the mechanism that powers their network, and one such name is the Chia network.

Garnering a bundle of attention upon its launch, the coin quickly became a favourite altcoin for many investors before it propagated a wave of skepticism among investors who were considering adding the coin to their portfolio.

Today, many are questioning whether: Chia coin is dead? And we may have an answer for that.

How Has Chia (XCH) Been So Far

Long-time investors keep their portfolios profitable by carefully analyzing a coin’s historical performance during their research, and a similar look at the trajectory XCH has followed can give us useful insights into how the coin may perform in the future.

Launched in May 2021, Chia immediately became popular among investors as it debuted at around $900 across exchanges. Mainly due to its unique consensus mechanism (discussed later in the article).

For close to two weeks following the launch, the price of the token spiked, reaching an all-time high of $1,600. Before it took a massive plunge in a little over a month, it hovered around $200 for a few months.

Ever since, the XCH token price has been on a linear decline, occasionally exhibiting upward movements, although the numbers never managed to cross three digits.

Starting the year around a $100 mark, the token’s price stands at $31.4 at the time of writing. Showing a 70% drop just this year, which is relatively not as bothersome as the all-time decline of over 98%- relative to the all-time high price of the token.

Is it over for Chia? Is the coin dead? Well, we’ll assess the coin’s condition.

Chia coin XCH is the native token of the Chia ecosystem, used for various purposes, including making payments and minting NFTs. Chia has its own blockchain and was first introduced as an advancement to Bitcoin since it serves the same purpose while consuming a lot less energy.

The network follows a “Proof of Space and Time” consensus mechanism, wherein participants can use their free disk space to secure and keep the network operational. Unlike the blockchains based on the PoS mechanism, Chia uses up to 500x less energy & is therefore considered a better alternative.

The Chia token, XCH can be used for making decentralized payments. Other than that, the token can be mined on spare SSDs where validators are required to install 100GB worth of hashes on these drives. These participants are then rewarded with XCH tokens for storing a new hash in their storage space. 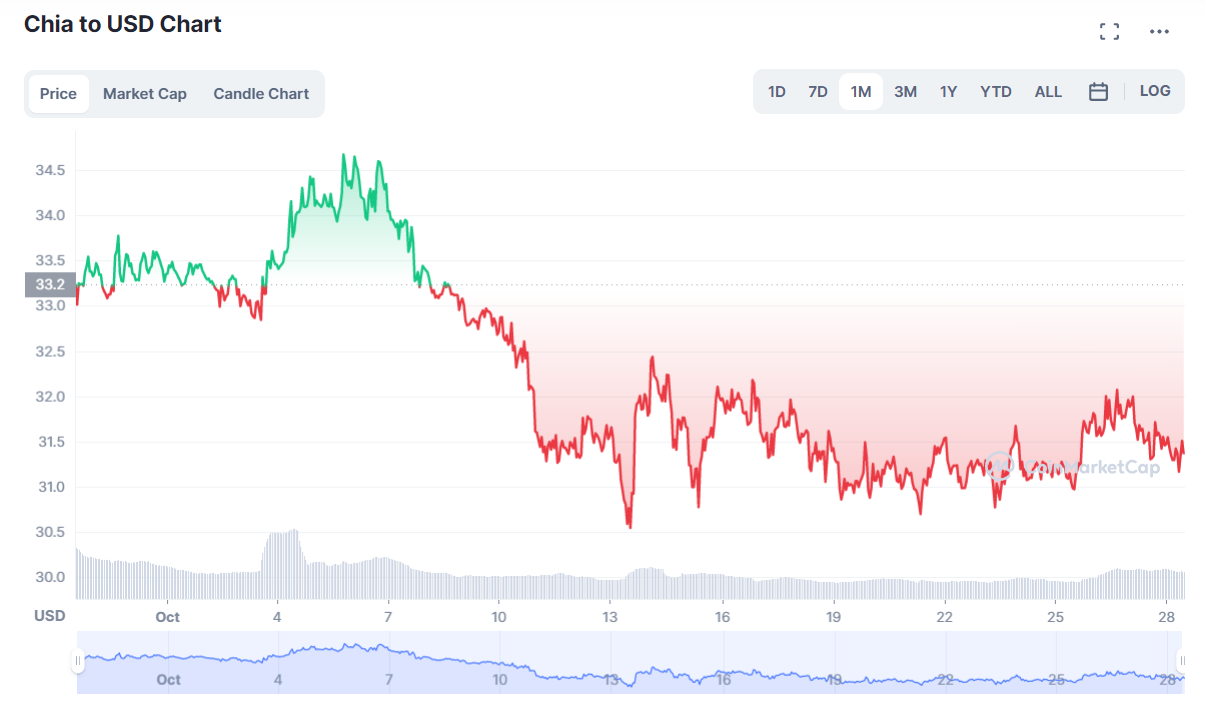 Apart from this, the token is also said to be used for NFTs. While the network’s very own programming language Chialisp can be used for creating dApps.

Essentially, the coin proposes an environmentally friendly alternative to Bitcoin, citing saving energy as the primary incentive for users.

While on the face of it, the token offers an attractive value proposition, it comes out to be quite underwhelming in reality. For starters, the token price is significantly down -more than 98% to be precise- since its launch and hasn’t shown much positive momentum lately.

The primary drivers of the token’s price are the hype around the token and its adoption, both of which seem to be falling since the launch. The native programming language, too is quite complex, and there are better, more efficient options available for developers.

Considering the price action, and the de-escalating support, it’s fair to conclude that the coin is dead, at least for now. If the company behind the coin introduced new applications that might legitimize the coin’s value proposition to another level, there could be hope.

The price of the chia token mainly depends on the adoption of the technology and the hype around the project. It’s uncertain to estimate the hype since any important additions to the project might overwhelm support from the community but that’s no metric to rely on.

On the other hand, while the coin gained major traction because it enabled mining on SSDs, this same feature is becoming the reason why miners are considering alternative coins to mine. And therefore, XCH’s price in future may not be as exciting as investors would like to believe.

In 2022, if the transaction fees of the network drop significantly, the coin could reach $60 by the end of the year, optimistically speaking. Only if the adoption increases, the coin may cross $100 in 2023. Any prediction beyond the point is futile since the price is almost entirely dictated by the adoption- which is quite underwhelming as of now.

Is IMPT a Better Alternative To XCH?

As understood from the XCH price prediction, the token may not have a glamorous future. However, if you’re still considering adding the coin to your portfolio, you may want to consider other alternatives that show more promise in the long run.

Investors are increasingly flocking towards IMPT, a crypto project that helps brands reduce their carbon footprint while rewarding investors for their contribution.

By collaborating with over 1000 brands, including Amazon, Microsoft and Gamestop, the project has built a strong presence in the little time since it was launched. Every time customers shop with one of these brands, the retailers will share a portion of their earnings with the company, helping them reduce the carbon emissions they cause. 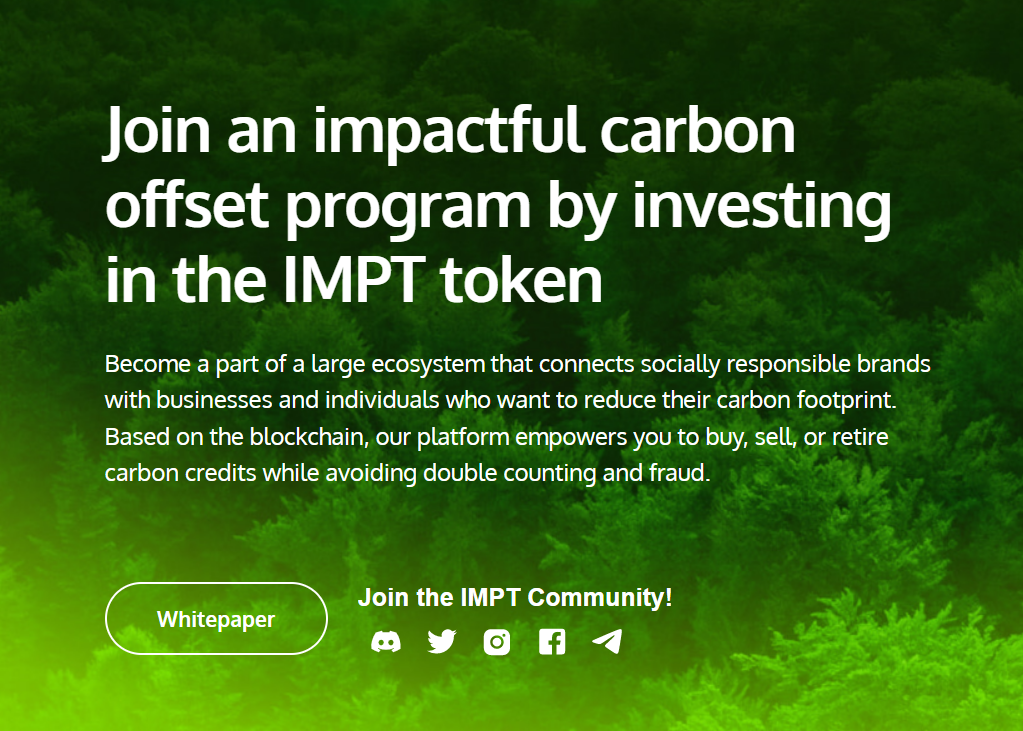 Users are also rewarded with IMPT tokens, which they can exchange for carbon credits which can either be retired to offset their carbon footprint or can be listed as NFTs on the official platform.

The official token of IMPT is currently undergoing a presale and has raised over $11 million so far. The token initially sold for $0.018, while it’s currently available at $0.023. That’s a 27% increase and the token isn’t even launched on exchanges yet.

Users willing to bet on the next altcoin can consider IMPT as their option. 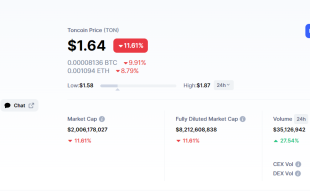 Toncoin Price Prediction – Why Is TON Pumping Over 20%?