Despite cost concerns, a New York Bankruptcy Judge approved cryptocurrency lending company Celsius’s request to sell mined BTC. According to recent reports, a US bankruptcy court has approved the sale of Bitcoin mined by the cryptocurrency loan platform Celsius.

During a hearing in Manhattan, Chief US Bankruptcy Judge Martin Glenn expressed concern that Celsius would need to make additional investments to get its mining facilities operating at full capacity, delaying the profitability of bitcoin mining.

However, he also stated that he would trust the company’s business decisions and allow them to proceed.

As previously stated, a US court granted Celsius’ request to sell mined bitcoin. However, the court’s decision did not satisfy the US trustee appointed to the case. It should be noted that the parties involved in the crypto lender’s bankruptcy proceedings reportedly met to discuss various issues.

Martin Glenn, the Chief Judge of the United States Bankruptcy Court for the Southern District of New York, quickly granted the majority of the requests because they were uncontested. Before declaring bankruptcy in July, the company attempted to expand its mining operations.

According to the court documents, the company generated 14 BTC per day. At this time, the company can only pay for a few essential vendors, fees and taxes, insurance premiums, legal counsel, and utilities required for commercial operation, to name a few.

Celsius Will Eventually Run out of Funds in October

Celsius used 3,114 BTC in mined Bitcoin to cover some of its 2021 expenses. Its mining expansion contributed significantly to its rising costs. Several interim motions were presented during the first court hearing in July, including funding for costs associated with a still-under-construction mining plant.

Celsius has previously stated that its mining operations will assist it in repaying a significant portion of its liabilities. These expenses and obligations have risen in the previous week. However, according to a recent filing, Celsius’s financial resources would be depleted by October 31st.

Nonetheless, the legal team claimed that it had certain lenders who would continue to support the business.

Prior versions of the proposal raised concerns for the US Trustee and the creditor committee. It was unclear whether Celsius planned to engage in lending or trading activities with this Bitcoin to increase their financial gain. The resolved concerns were reflected in the bill’s final form.

Cornell and Glenn remained skeptical, arguing that the mining company is expected to have a negative cash flow in the future, calling into doubt the idea’s viability. Because the building is still in the development phase, say the lawyers of Kirkland & Ellis.

But Glenn said Celsius’s request is good for business. Meanwhile, on September 1st, the parties will have another court date. The Creditor Committee had previously scheduled a telephone meeting for August 19th. 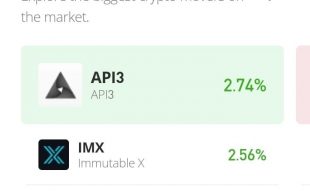 Immutable X Daily Price Prediction for the 18TH of August: IMX/USD Bulls Too Weak to Regain the Market