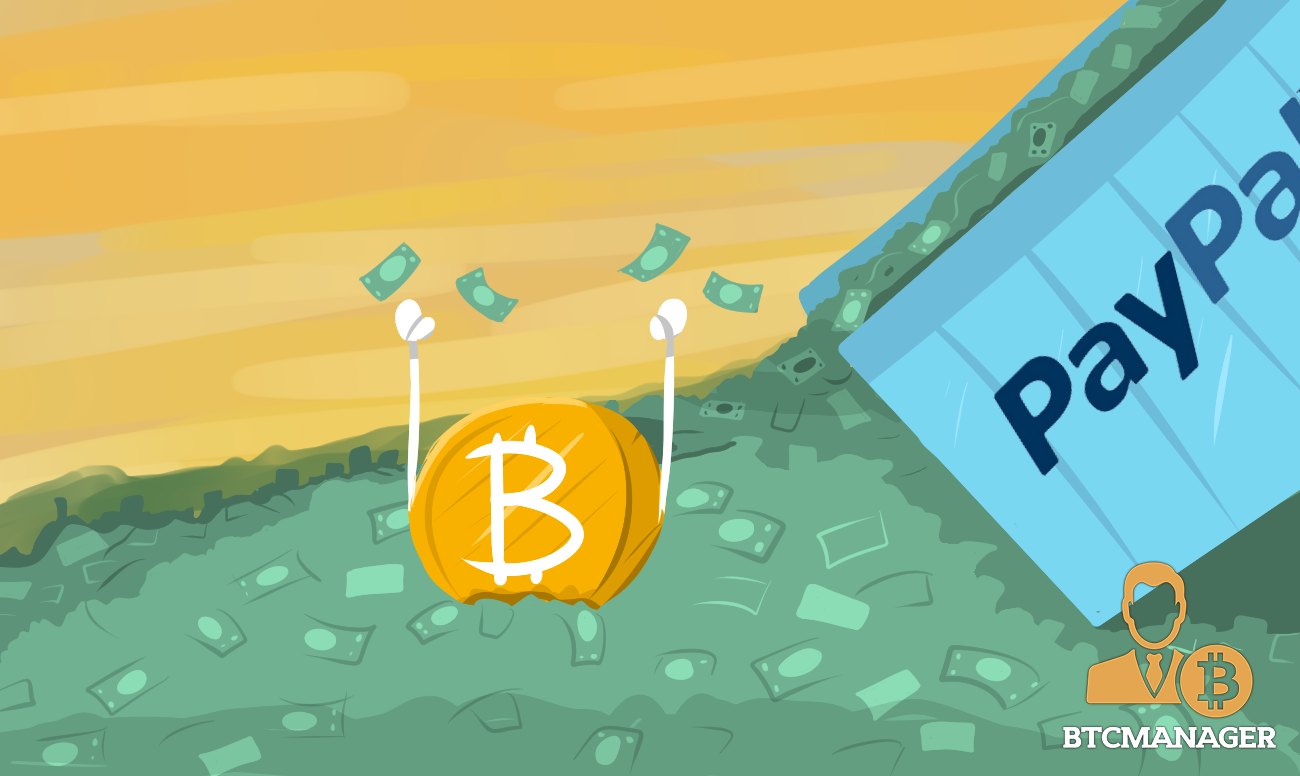 After a meteoric rise in value, the market cap of bitcoin briefly crossed the $70 billion mark, surpassing PayPal by the same metric, the most widely utilized financial network online.

Amidst increasing demand from institutional investors and rapid rise in global adoption, the price of bitcoin increased from around $3,400 to $4,400 within a single week. Bitcoin’s market capitalization surpassed that of PayPal, as the value of the entire cryptocurrency market moved closer to the $150 billion region.

Why Bitcoin Passing Market Cap of PayPal is Notable

PayPal is arguably the most prominent and widely recognized financial network used by online users. In 2016, the company processed $354 billion in transactions, solidifying its position in the global financial technology industry. As of current, the only two financial networks that are capable of competing for the market cap and user base of PayPal are bitcoin and Alibaba’s $60 billion fintech app Alipay.

PayPal and bitcoin are fundamentally different from one another. The former is a financial platform operating on top of existing banking systems by dealing with fiat currencies. Bitcoin is an independent and decentralized financial network of its own, which operates as a digital currency and a safe haven asset for its users and investors.

Since the beginning of 2016, an increasing number of institutional investors and professional traders have begun to consider bitcoin as digital gold or a safe haven asset. Investors started to utilize bitcoin to hedge against economic uncertainty and global markets volatility, due to its tendency to outperform all assets and reserve currencies amidst international financial instability.

Hence, the daily trading volume of bitcoin drastically increased, as overseas markets matured and the digital currency gained legality and global adoption across many regions.

According to market data providers including Blockchain, bitcoin processes around 282,000 transactions on a daily basis. In contrast, Paypal process 6.1 billion transactions annually. In terms of scaling and flexibility, Bitcoin is still in its earlier stages. Two-layer solutions like the Lightning Network and TumbleBit are expected to significantly improve bitcoin’s ability to handle small-scale transactions and even microtransactions. Since Bitcoin’s launch in 2009, it has only undergone one major update in regard to scaling, which is the activation of the Bitcoin Core development team’s scaling solution Segregated Witness (SegWit).

On August 24, SegWit is expected to activate after the completion of its lock-in period. The completion of SegWit will lead to the emergence of the Lightning Network and two layer solutions-based applications like Zap, which will be able to facilitate small transactions at a higher rate, similar to PayPal.

Centralized financial networks have their downsides, specifically regarding security and efficiency. Most PayPal users are well aware of the network’s extremely inefficient transaction verification process, which can take at least a week to six months. For merchants, the process is even more difficult to handle due to PayPal’s costumer protection policy. For instance, if a customer on Amazon transacts with PayPal, in most cases, merchants are required to wait around 30 days in order to receive the transaction.

Bitcoin transactions are not instantaneous. However, with appropriate fees, payments can be verified within 30 minutes, with three confirmations from miners. Within a period of two years, bitcoin has surpassed the market cap of Western Union and PayPal, the world’s largest remittance and online financial service providers. As bitcoin continues to scale and experiences an increase in global adoption, it will demonstrate exponential growth and eventually compete with reserve currencies, as analysts explain.

More importantly, on CNBC, PayPal founder and former COO David Sacks also noted that bitcoin fulfills the original vision the company had when it first launched. He stated:

“After PayPal, I never thought I would get interested in payments again. But bitcoin is fulfilling PayPal’s original vision to create ‘the new world currency.’ We actually had T-shirts printed in 1999 with that mission statement. A payment is just a credit to one account and a debit to another. That’s a database entry. We believed that, if we could get enough people to participate, money would never need to leave the system.”