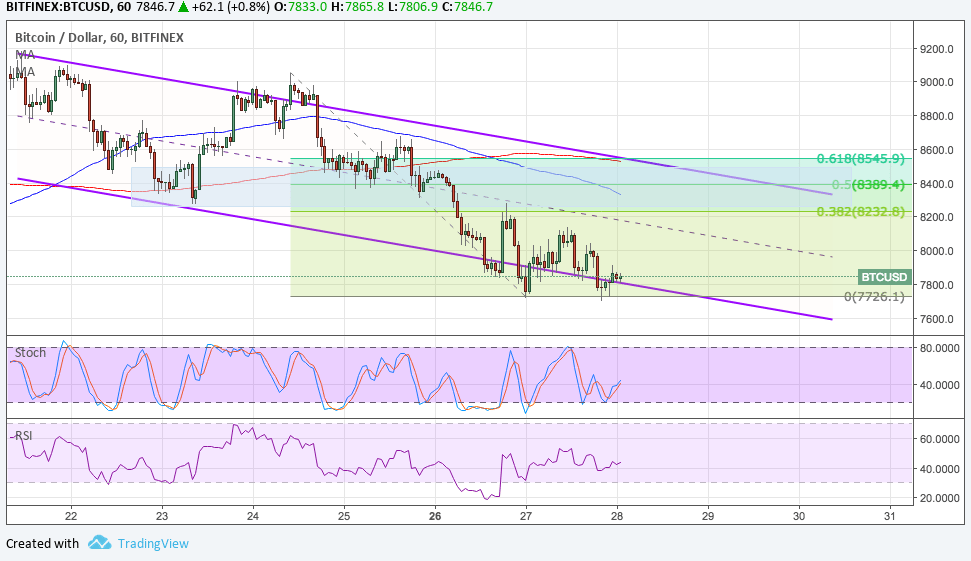 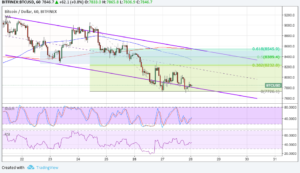 Bitcoin price continues to trend lower and is inside a descending channel on the 1-hour time frame. Price is currently testing the channel support and might be due for a pullback to the resistance. Applying the Fibonacci retracement tool shows the next potential resistance levels.

Bitcoin price could be in for a much-needed pullback as it tests the bottom of the short-term descending channel.

The 100 SMA crossed below the longer-term time frame on this chart to signal that the path of least resistance is to the downside. The gap is also widening to reflect strengthening bearish pressure.

However, stochastic is pulling up from oversold levels while price is testing the channel support. This signals that a bounce could take place, possibly taking bitcoin price up to the Fibonacci retracement levels.

If any of the Fib levels hold as resistance, bitcoin price could resume the drop to the swing low at $7800 or even break lower.

Bitcoin price has taken a hit recently after Twitter announced that it also plans on banning cryptocurrency ads on its platform, following in the footsteps of Facebook and Google. This has led to speculations of weaker volumes and activity moving forward.

On the longer-term time frames, though, it can be seen that bitcoin price is still trading safely above the uptrend line, so another test could lead to a stronger bounce. Besides, analysts have pointed out that the slide occurred before the actual Twitter announcement so profit-taking or other factors may simply be in play then.

On a less downbeat note, the CBOE encouraged the SEC to allow bitcoin ETFs, citing “The Commission should not stand in the way of such ETPs coming to market.”

The post Bitcoin Price Technical Analysis for 03/28/2018 – Time for a Pullback? appeared first on NewsBTC.