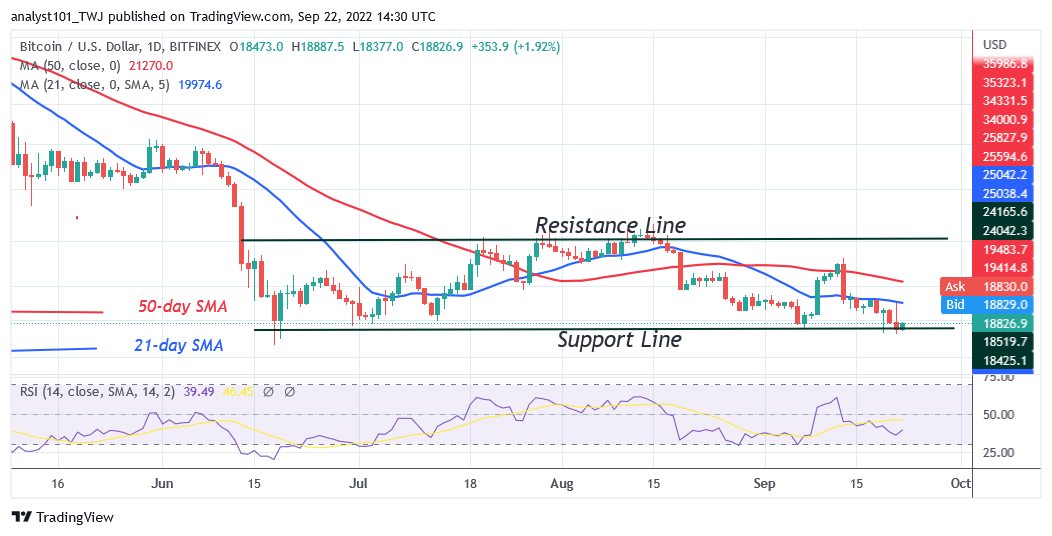 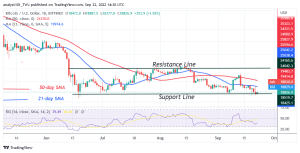 BTC/USD has regained bullish momentum as buyers recoup above the $18.2K Low. On September 19 upward correction, Bitcoin rallied to the high of $19,694 but could not break above the recent high. The largest cryptocurrency can recover above the $20,000 high if it breaks above the 21-day line SMA.

The current support may hold because of the task of two candlesticks with long tails. The long candlestick tails show strong buying at lower levels of price. Bitcoin has risen to the high of $19,380 as it approaches the 21-day line SMA. For instance, if buyers push the crypto above the 21-day line SMA, Bitcoin will rise to the 50-day line SMA. A break above the moving average lines will enable Bitcoin to reach the $25,205 overhead resistance.

The United States Federal Reserve’s inflation “sledgehammer” may further cause Bitcoin and Ethereum to decline. The latest Fed interest rate hike is likely to be announced this week. The expectation is that the market will have a minimum increase of a 75-basis-point. Others think that the interest rate hike could be as high as 100 basis points. According to Bloomberg analyst Mike McGlone, Fed’s actions will continue to dampen investor sentiment as Bitcoin and Ethereum decline to the bottom price level.

He said: “We have to turn over to the macro big picture and what’s been pressuring cryptos this year and that is the Fed sledgehammer.” During the interview, McGlone predicted that the latest rate hike could cause a crash across assets that are worse than the 2008 housing bubble meltdown: “I think it’s going to be worse than the 2008 correction, worse than the Great Financial Crisis.” The Fed started easing in 2007, and then they added massive liquidity. They cannot do that anymore,” he added.

Meanwhile, Bitcoin is making an upward correction as it reaches the high of $19,378. The upward movement will be accelerated if price breaks above the $20,000 high. Bitcoin is at level 44 of the Relative Strength Index for period 14. It indicates that Bitcoin is in the bearish trend zone despite the upward correction. 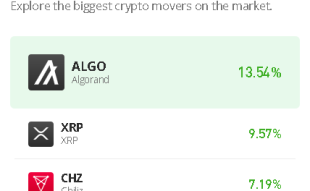 ALGO Price Breaks above $0.38 Level as TAMA Gets Hotter!

Patrick Jennings •Updated: 05 October 2022 Updated : Updated: 05 October 2022
View All News
Note that the content on this site should not be considered investment advice. Investing is speculative. When investing your capital is at risk. This site is not intended for use in jurisdictions in which the trading or investments described are prohibited and should only be used by such persons and in such ways as are legally permitted.