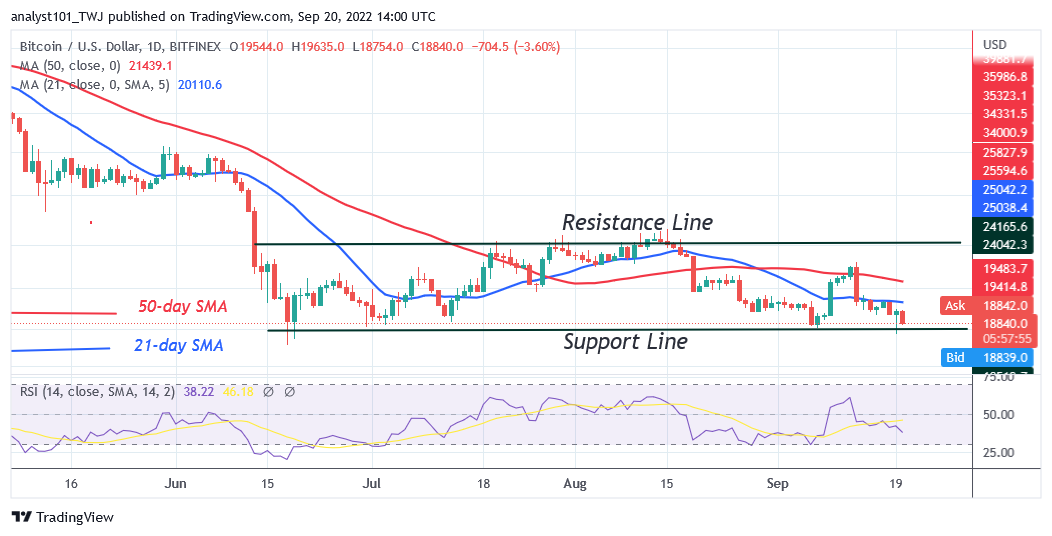 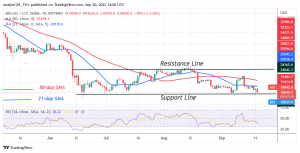 Bitcoin’s (BTC) price is in a downtrend as it hovers above the $18.6K Low. The decline was caused by the rejection at the 21-day line SMA. The bears attempted to sink Bitcoin beyond the current support. However, on September 19, a candlestick with a long tail shows strong buying at the $18,675 price level.

On September 17, the upward correction was terminated at the 21-day line SMA. Buyers could not keep the price above the 21-day SMA which resulted in the current downtrend. On September 18, Bitcoin turned down from the moving average lines which signaled the resumption of a fresh decline. The largest cryptocurrency declined to the low of $18,256 as bulls bought the dips. Bitcoin has revisited the previous low of September 6 which is the $18,675 low. BTC price pulled back but has resumed selling pressure. The downtrend will resume if price breaks the $18,675 support the second time. Bitcoin will be compelled to revisit the critical support level of $17,605. However, the bulls have to defend the current support levels to avoid another round of downtrends.

MicroStrategy has purchased an additional 301 BTC for $6 million at an average price of $19,851. This recent acquisition has increased the company’s holding to 130,000 BTC. In other words, MicroStrategy is now holding 0.62% of all the Bitcoin (BTC) that has been mined. The company is one of the planet’s largest holders of the asset, owning 130,000 BTC. The Securities and Exchange Commission filing states that the firm is holding 130,000 BTC at an aggregate purchase price of approximately $3.98 billion.

Meanwhile, Bitcoin is holding above the critical support as it hovers above the $18.6K Low. BTC’s price will rebound if it holds above the current support. It is at level 38 of the Relative Strength Index for period 14. It indicates that Bitcoin is in the bearish trend zone and may further decline. 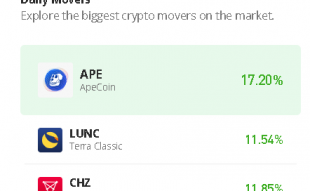