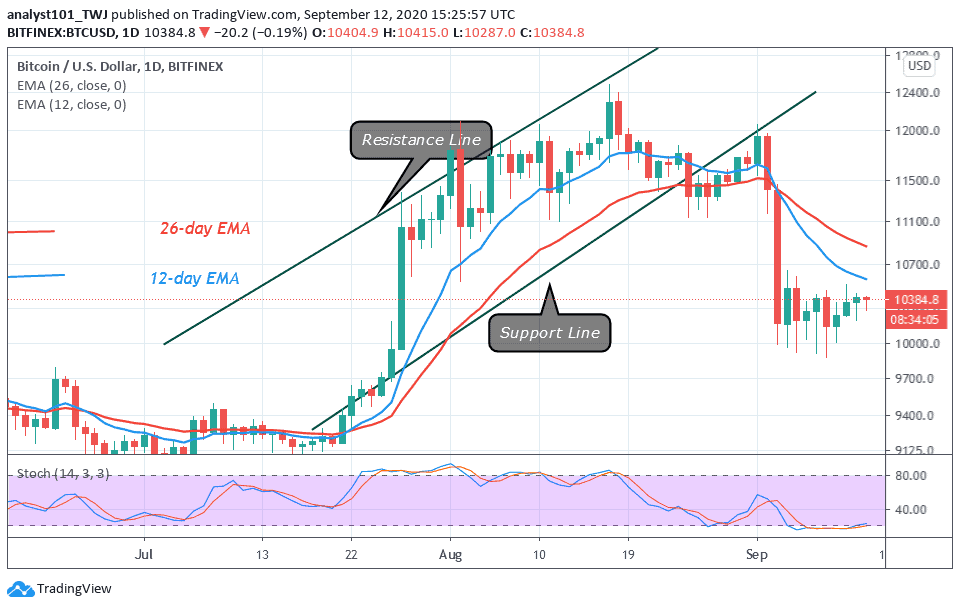 Bitcoin (BTC) Price Prediction – September 12, 2020
Since September 9, BTC/USD is trading between $10,200 and $10,500. The current resistance can easily be broken when price fluctuates at a striking distance to the resistance zone. The range-bound movement will continue if the current key levels remain unbroken.

Following the recent bearish impulse on September 3, Bitcoin bulls have been battling to break the $10,500 and $10,600 resistance levels. Bitcoin will resume an upward move if buyers clear the resistance levels. There is an indication that the price movement will accelerate to $11,000. The bullish trend resumes above the $11,000 support .

The upside momentum will resume when the price is above the $11,100 support. In the previous price action, the market fluctuates between $11,100 and $11,800 to retest the $12,000 overhead resistance. Meanwhile, Bitcoin is trading and stable above $10,200. Bitcoin is below the 20% range of the daily stochastic. This implies the king coin has been in the oversold region since September 3. Buyers are likely to emerge to push prices upward.

Hong Kong’s BTC Association Organizes the “Bitcoin Tram” Campaign
The Bitcoin Association of Hong Kong is sponsoring crypto awareness and education, by launching the “Bitcoin Tram” ad campaign in Hong Kong. According to report, the campaign is scheduled to run between September 11 and October 8, while billboards advertisement across the city will be on October 1. The educational campaign was initiated by the Hong Kong Bitcoin community and is coordinated by the association.

The campaign is sponsored by donations from the community. The ad campaign is expected to add to the global adoption of the digitized economy. The statement added the following: “We hope the campaign will allow us to discuss how Bitcoin fits into a quickly digitizing global economy, the opportunities and dangers of drastic technological advancements and the implications of digital, verifiable scarcity.”

Nonetheless, the bulls have successfully held the $10,000 support. For the past four days, BTC has been stable above $10,200. It is unclear if the downtrend will continue as BTC reach the oversold region of the market. Analysts believe that if the $10,000 is breached, the market will reach a low of $9,300 or $9,000.