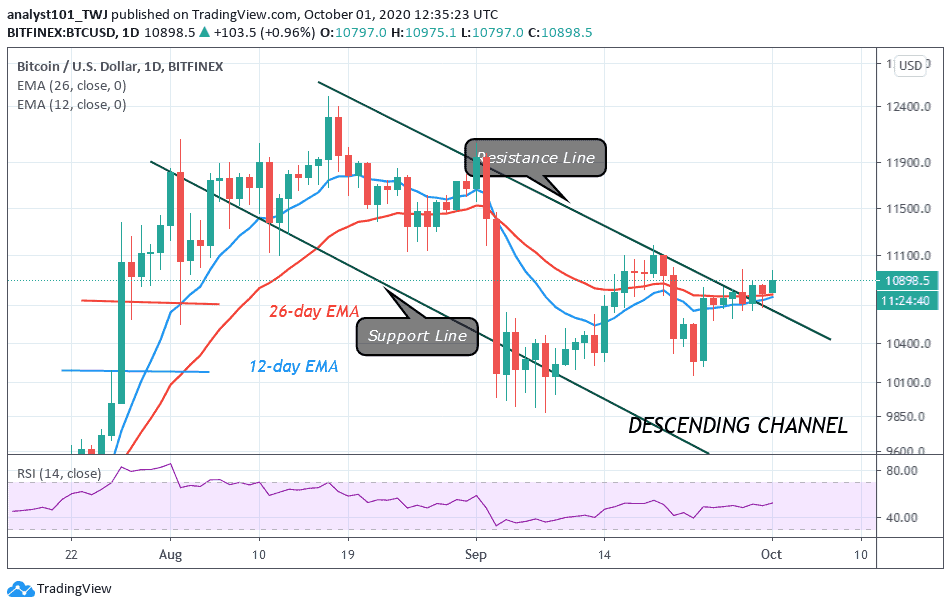 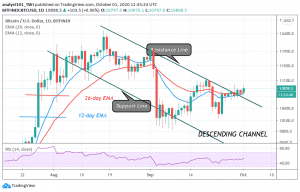 The price is above $10,900 at the time of writing. When price breaks the resistance level, the market will rally above $11,100. If the momentum is sustained, Bitcoin will have an accelerated price movement above the $11,100 support. The market is expected to rally above $11,500. The bottom line is that once the resistances at $11,000 to $11,300 are cleared the upside momentum has resumed.

Bitcoin Rises Against the U.S. Dollar Currency Index (DXY) After the Promise of a Second Stimulus Check
On Wednesday, Treasury Secretary Steven Mnuchin has indicated that talks were ongoing as consultations over a new coronavirus stimulus deal continued in Washington. According to the treasury secretary that “ $1,200 checks for Americans will feature in any deal”. The reports have it that the U.S. dollar currency index (DXY) weakens which results in more opportunities for Bitcoin gain.

Mr. Mnuchin was speaking a day after the end of a presidential debate between President Donald Trump and his rival Joe Biden. Because of this, a popular trader, namely Tone Vays has advised that no matter who takes over the White House that traders should buy Bitcoin. This is because they will keep printing money which finances stimulus packages. This invariably will harm the dollar.

Meanwhile, Bitcoin has continued to retest the resistance zones. BTC will attain a new high as the $11,000 resistance is breached. On September 28 uptrend; BTC was resisted at $10,980. The red retraced candle body tested the 38.2% Fibonacci retracement level. This indicates that the market will reach a high of 2.618 Fibonacci extension or a high of $11,603.10.

The first presidential election debate of 2020 has gone to pass, and all the ...