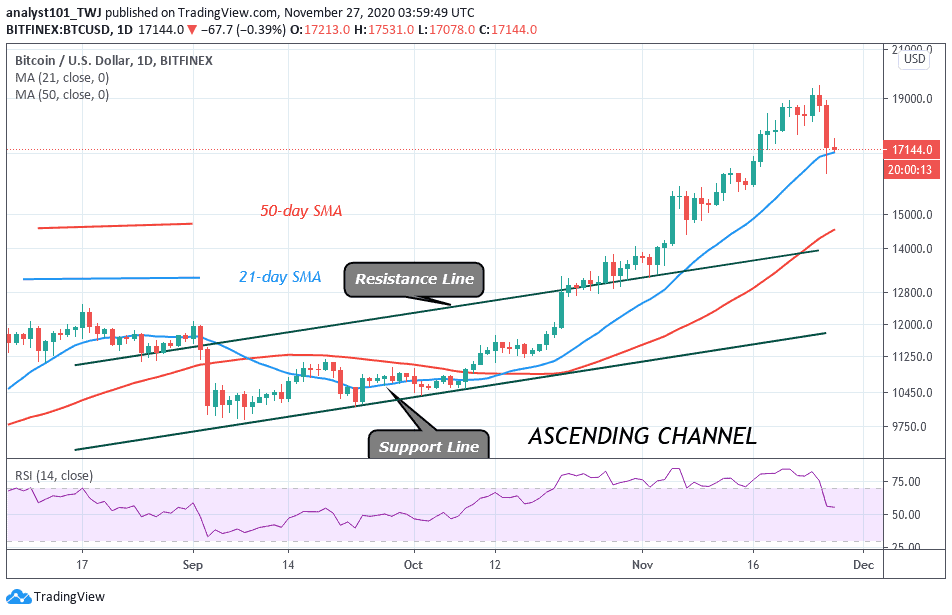 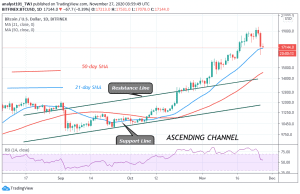 Bitcoin (BTC) Price Prediction – November 27, 2020
BTC price faces rejection at the $19,200 resistance. The coin fell after forming a bearish double top. On November 24, buyers attempted to push BTC above the $19,200 but were repelled. After a pullback to $18,700 low, the bulls retested the overhead resistance. BTC/USD price plunged to $16,400 low.

Bitcoin in its recent downtrend slumps to the previous support above $16,400. The crypto would have fallen into the range-bound zone if the bears have broken below $16,400 support. Nonetheless, Bitcoin bulls have the task of revisiting the previous highs. Firstly, buyers have to push the coin above the $18,400 and $18,800 price level.

In the previous price action, Bitcoin made corrections for four days before breaking the resistance at $18,800. Today, BTC is resuming upside momentum as price reaches a high of $17,237 at the time of writing. Firstly, the bulls must break the minor resistance at $17,750 and $18,250 before attempting the major resistance. However, if the bears turn around and break below the $16,400 support, BTC will further decline o the downside.

Bitcoin Makes ‘a Healthy Correction’, Predicted ‘Euphoria’ Ahead by Stack Funds
Crypto index fund provider Stack Funds has reacted to the drop by $2,000 as a ‘healthy “healthy correction”. Reports have that it is necessary before Bitcoin continues its upward momentum. It is assumed that Bitcoin could surge towards $100,000 next year following yesterday’s “healthy pullback”. According to reports, Bitcoin reached the $19,000 price level after posting weeks of consecutive gains.

Besides, Bitcoin has remained in the overbought region since October which supports the need for correction. A typical example is during the 2017 bull market, where BTC prices rose from $850 to almost $20,000. This represents an increase of 2,250%. The Crypto index fund suggested that even a quarter of this price increase would see Bitcoin hitting more than $86,000 next year. This will happen before we enter the ‘Euphoria’ stage of the cycle.

Meanwhile, from the price action, Bitcoin fell to $16,600 and made corrections upward. Nonetheless, on November 26 downtrend, a retraced candle body tested the 78.6% Fibonacci retracement level. The retracement indicates that Bitcoin will fall and reverse at level 1.272 Fibonacci extensions. In other words, BTC will reverse at $15,410.90 price level. Nevertheless, BTC has already reversed at $16,600 low. 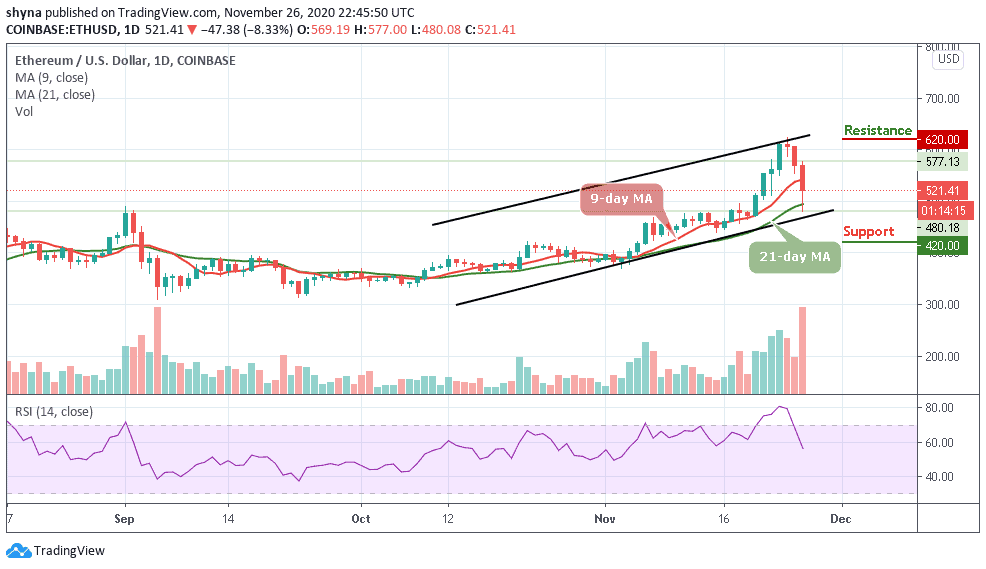