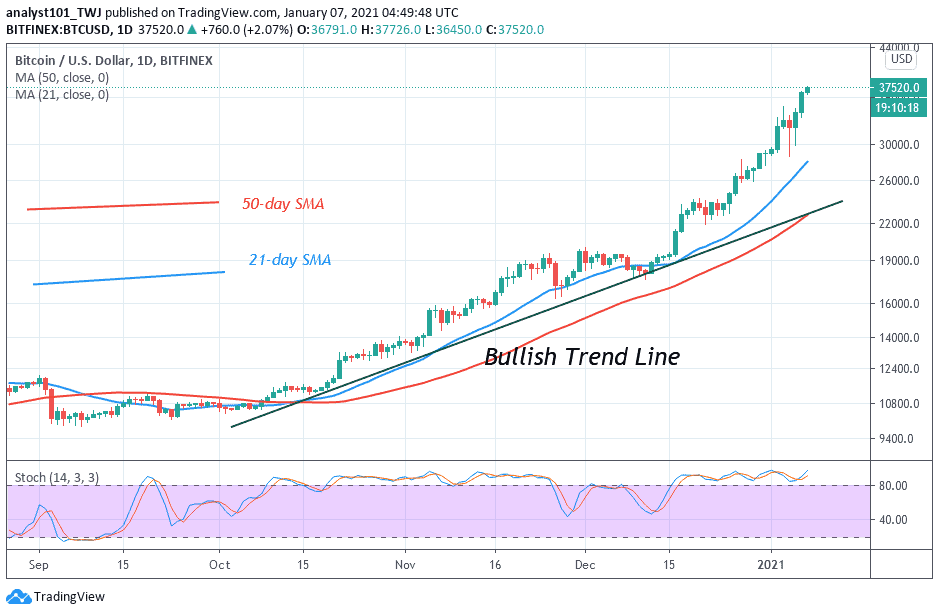 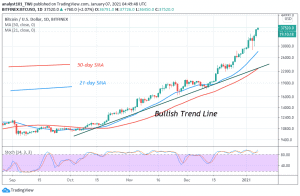 Bitcoin (BTC) Price Prediction – January 7, 2021
BTC/USD has risen to $37,470 high after three days of correction. On January 3, the BTC price reached $34,873 but was repelled. This led to the correction and the subsequent breaking of the $35,000 resistance level. The bulls have to jump the next hurdle at the $37,000 price level for the resumption of the upside momentum.

Bitcoin bulls resumed the upside momentum by pushing BTC above the $35,000 resistance level. On January 6, the bulls retested the resistance, but BTC dropped again to $34,000 low and rebounded. The bullish momentum broke the resistance as BTC rallied above $37,000. The breaking of the $37,000 resistance is incomplete as Bitcoin faces another rejection at the recent high. The RSI and the daily stochastic have remained in the overbought region signaling a possible correction. The previous correction on January 3, resulted in BTC plunging to $28,540 low. However, if the correction takes place and the price breaks below $28,540 support, the downtrend will resume. Meanwhile, Bitcoin is retracing after rejection from the recent high. BTC has fallen to $37,095 at the time of writing.

Cryptos Market Cap Break $1 Trillion Following Recent Rallies
The total cryptocurrency market capitalization broke the $1 trillion for the first time on Tuesday, January 6th. Bitcoin and Ether account for roughly two-thirds of the overall market capitalization. The trillion-dollar capitalization was reached when the recent rallies exceeded the highs from the 2017 and 2018 bull markets. According to CoinMarketCap, the last cycle top in early 2018, reaches a combined market capitalization of roughly $830 billion. There are reports that many crypto observers are forecasting a bullish 2021 for Bitcoin and altcoins. This is based on the growing institutional demand for Bitcoin. They have expressed four-year market cycles for their optimism. 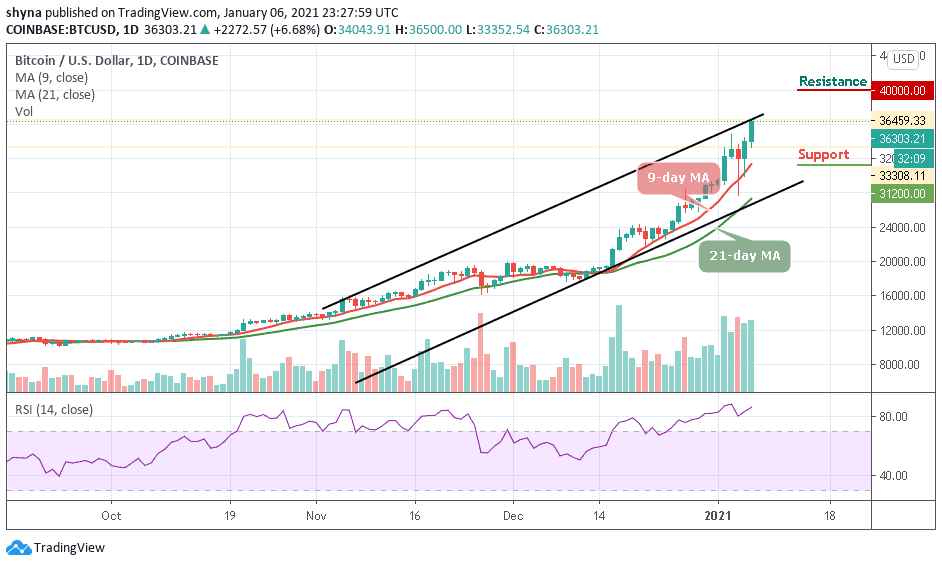 Bitcoin (BTC) Price Prediction – January 6 At the time of this writing, Bitcoin ...