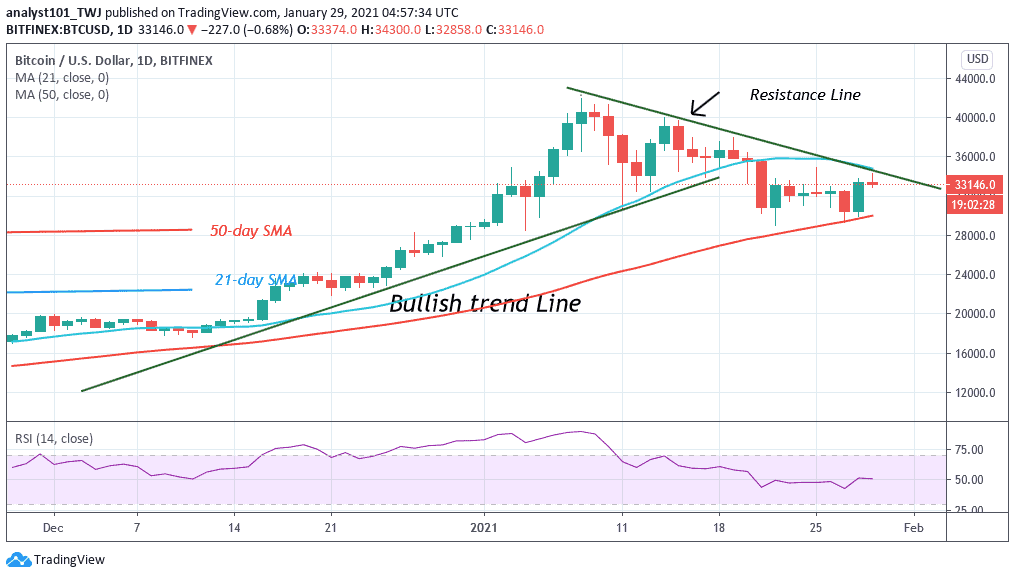 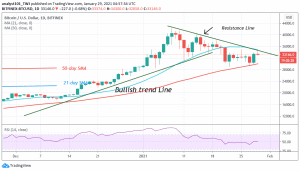 Bitcoin (BTC) Price Prediction – January 29, 2021
Since January 22, BTC/USD price first broke the $30,000 support and pulled back. For the past week, the crypto has been fluctuating between $30,000 and $34,000. There has been no significant price movement as the range-bound levels are yet to be broken.

Today, the BTC price is falling after retesting the $34,000 resistance levels. For the past week, the bulls have made attempts at the resistance thrice to break it. Each attempt results in a fall to the lower price range. The bears have made strong contention to sink BTC price below the $30,000 support level. The $30,000 support has been broken twice as the crypto slumped to $$28,000 low.

Shortly, the bulls ‘buy the dips’ as Bitcoin recovered above the $30,000 support. This has been the market scenario as BTC price is range bound between $30,000 and $34,000. The possibility of a breakout or breakdown is imminent if the range-bound movement persists. In the current dispensation, a breakdown will compel the coin to decline to the low of $25,800. Similarly, a breakout will catapult the coin to rally above the psychological price level of $40,000.

Chinese New Year Could Increase Bitcoin Selling Pressure, by Analyst
February 12, is presumed to be the upcoming Chinese New Year holidays. It is known as the Lunar New Year or Spring Festival. The Chinese New Year is one of the biggest holidays celebrated in the country. The festival and is characterized by increased spending. Analysts believe that this holiday will indirectly affect Bitcoin’s selling pressure. One major reason for impending sell-offs on the market is due to Asian miners’ intention to offload their funds amid the upcoming week-long holiday.

It is also estimated that 60% of global Bitcoin mining pools are located in China. The Stack Funds head of research Lennard Neo indicated that a lot of selling pressure is expected from Chinese miners. Lennard Neo stated that the ongoing sell-off coincides with the upcoming holidays, signifying that the floor price has yet to be seen: “With upcoming Chinese New Year holidays, we expect this selling pressure to continue in the short-term, providing good entry opportunities for market participants. […] We also expect this volatility to persist in the coming weeks, adding pressure to further corrections for Bitcoin prices.”