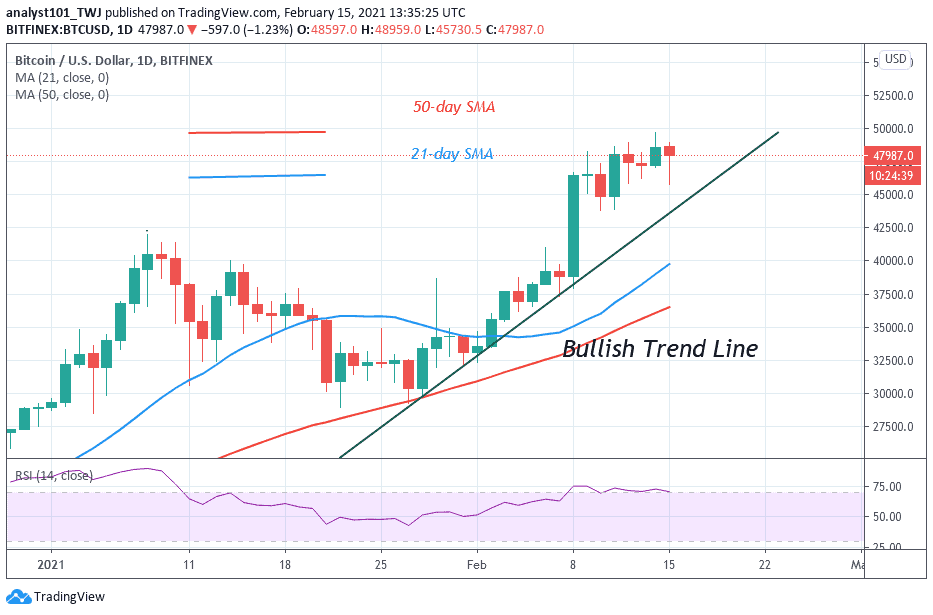 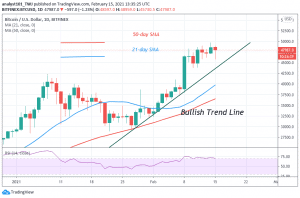 Bitcoin (BTC) Price Prediction – February 15, 2021
Yesterday, BTC/USD attained its peak price as it reached a high of $49,695. Soon after the attainment of the new price level, BTC was repelled. The king coin dropped to $45,730.50 low. As usual, the bulls buy the dips as price corrected upward. The bottom line is that Bitcoin bulls are yet to break the $48,000 resistance level, convincingly. Consequently, Bitcoin has been fluctuating between $44,000 and $48,000 since February 9.

Today, the Bitcoin price dropped to $45,730 after rejection from the peak price of $49,695. Since February 9, Bitcoin bulls failed to break the $48,000 overhead resistance. Instead, BTC price fluctuated between $44,000 and $48,000 price levels. Buyers have retested the $48,000 resistance thrice but unable to push above it. Consequently, BTC price will slump to the $44,000 low, each time it faces rejection from the recent high. The bulls have the advantage over the bears to break the current resistance level. On the upside, if the bulls break the resistance at $48,000, the bullish momentum will extend to the $50,000 high. Bitcoin will rally to the next psychological price level once it breaks the $50,000 high. Conversely, if the bears break the $44, 000 support level, the king coin will resume a downward move.

Meanwhile, Bitcoin has continued its fluctuation below $48,000. According to February 9 uptrend; a retraced candle body tested the 61.8% Fibonacci retracement level. The retracement indicates that Bitcoin will rise to level 1.618 Fibonacci extension or the high of $55,102.50.

US Citizens Could Have Had Almost $9,000 From BTC With First Stimulus