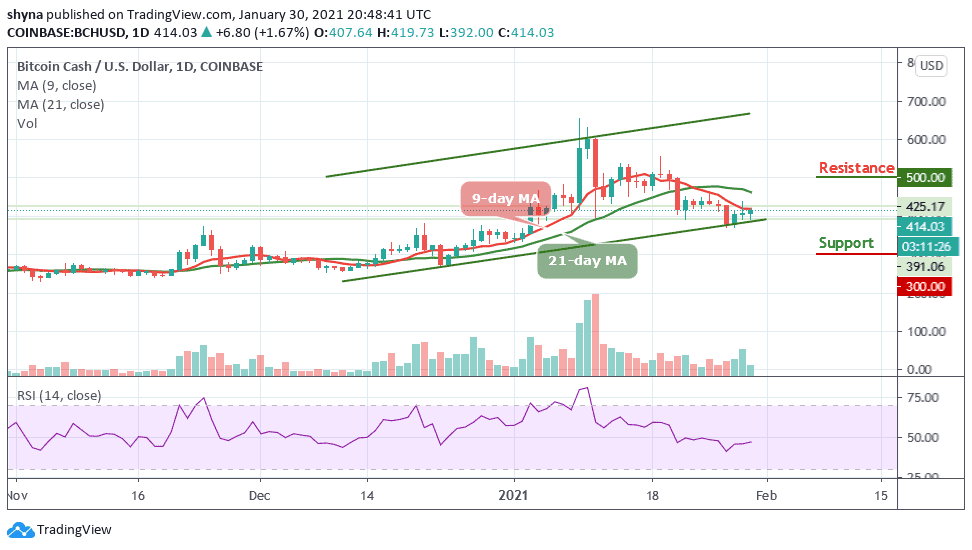 BCH/USD keeps lagging as the technical indicator suggests that lateral trade may prevail in the short term.

BCH/USD battles with the bear from the opening hours as the loss in the price was voluptuous. However, BCH/USD is now seen recovering from the slight price drop. Meanwhile, the speculation is that BCH/USD may keep the upsurge intact and bring a flourishing future. Yesterday, BCH price was seen touching a high at $439 and a low at $392.

What is the Next Direction for Bitcoin Cash?

BCH/USD seems to be picked up its pace and has risen above $400 today before dropping but the coin is still moving towards the 9-day and 21-day MA. However, observing the movement of the coin, the Bitcoin Cash has been showing an uneven movement with several rises and falls but the coin has not been able to maintain a consistent bullish run. Therefore, it may start to show signs of a downward movement slowly from the latter part of the day.

On the upside, the bulls could break the initial resistance at the $500 price level, and approach to retest the $550 and $600 resistance levels. The primary support holds ground at $400 while $345 will try to stop overstretched losses in case of a reversal. Therefore the primary supports at $300, $250, and $200 are very important as the RSI (14) suggest that sideways trading will prevail in the near term.

Against Bitcoin, the market bounces back from yesterday’s falling to move towards the 9-day and 21-day moving averages. Bitcoin cash could signal a bullish rally, which may likely meet resistance at 0.014 BTC and 0.015 BTC if pressure rises. In fact, the RSI (14) is moving above the 40-level.

In addition, the market structure reveals that bulls are trying to regain control of the market. Before the positive climb start, BCH is likely to retrace to the break level around 0.011 BTC. Should Bitcoin Cash drops below this consolidation area, the price may find support at 0.010 BTC and below.