Two of the most promising cryptocurrency games have become quite a rage, namely Axie Infinity (AXS) and Splinterlands over the course of the past year.

Battle Infinity is a new Play-to-Earn initiative that intends to be successful, following in the footsteps of other gaming companies that have been successful.

Instead of only having one game that can be played within its Metaverse, Battle Infinity wants to have several games that can all be played there.

The project is still in its infancy and has not yet published any of the items that it intends to in the future. In spite of this, the value of its native IBAT token has been steadily increasing.

The cutting-edge blockchain-based fantasy sports game that is available on the Battle Infinity Fantasy Sports platform is called P2e coin, and it is a token that complies with the ERC20 standard.

The coin may be used to purchase and trade players, as well as pay fees and take part in competitions. Battle Infinity is a framework for an online multiplayer game that gives players the opportunity to compete against their friends as well as random opponents from all around the world.

Battle Infinity is a fresh new project that has recently entered the market with the intention of capitalizing on the increased interest in and investment in the bitcoin gaming sector.

They want to develop and run a variety of games in which players compete for bitcoin rewards and may earn those prizes through participation.

The firm is also making gains in the burgeoning Metaverse market by establishing its own virtual environment where investors may participate in real-time gaming. This is an example of how the company is making strides in the industry.

The headquarters of Battle Infinity’s current CEO and co-founder, Mr. Jagjeet Jena, is in India. The other co-founder, Mr. Suresh Joshi, is also a seasoned professional in the gaming industry; however, the particulars of his history are not readily available to the general public.

IBAT, the native token of the Battle Infinity ecosystem, was just made available for trading on LBank with a pair consisting of IBAT and USDT.

Speculators now free to IBAT on any exchange outside PancakeSwap as a result of this development. The price of a coin will increase according to the number of exchanges on which it is listed since this indicates that the project has a greater potential for growth and widespread adoption.

According to CoinMarketCap, LBank is the eighteenth busiest cryptocurrency exchange due to its daily trading volume of more than one billion dollars. Tokens are presently held by over 7,290 individuals.

An investor sent a message to Battle Infinity’s Telegram channel, inquiring about the impending offering of IBAT and enquiring whether the investor might anticipate any favorable news. A member of the community administration team mentioned that further listings would be accessible very soon.

CoinGecko and CoinMarketCap have both added support for Battle Infinity’s IBAT token, which was initially debuted on the LBank exchange a week ago. Battle Infinity is a fantasy sports platform.

Along with CoinMarketCap, it is widely regarded as the most important listing tool for the cryptocurrency community, which allows users to monitor the prices of tokens and rate different projects.

IBAT just recently had a contest with a prize pool of $3,000, and the winners were those who finished in the top spots and submitted their information before the contest ended. The winners’ earnings were placed in the wallets that they were given.

Additional information on the Battle Infinity NFT (non-fungible token) gaming platform may be found in the whitepaper, the roadmap, and on the website battleinfinity.io.

What Happens To IBAT’s Price?

Battle Infinity is priced at approximately $0.004242, and it has a trading volume of about $328,000. Battle Infinity’s price has seen a slight decrease by in the past couple of hours. At the moment, CoinMarketCap places it at position #3211, and its live market cap is not accessible

There is no supply in circulation, and the total number of IBAT coins that may ever be produced is capped at 10,000,000,000.

It is anticipated that the rising trendline will provide support for the price of Battle Infinity at $0.00080, despite the fact that it is now experiencing a negative pullback.

IBAT has had trouble breaking above the $0.002579 triple top resistance level, which has contributed to a decline in the price of the cryptocurrency.

IBAT has seen a sell-off as a result of the creation of a bearish engulfing candle, but this decline may prove to be just brief given that IBAT has entered the oversold zone and has approached the $0.00079 triple bottom support level.

If candles are able to close above this level, there is a chance that the price of IBAT will have a bullish turnaround. Immediate resistance for IBAT is still located between $0.00200 and $0.002515.

There is a possibility that IBAT will have a positive turnaround if it gets listed on additional exchanges and platforms. Therefore, let’s maintain a close check on the support zone at $0.00079. 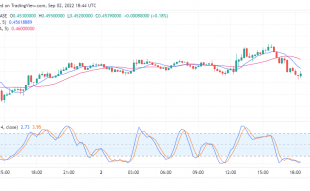 ADA Only Clinching Minimal Profit, There Is a Bullish Sign for TAMA