Axie Infinity’s AXS token saw a large price spike on Monday. AXS/USD was last changing hands around 27.5% higher on the day in the $8.70s per token area and price predictions have become more bullish. The large intra-day move, which sees AXS on course to post its strongest one-day gain since May, has unsurprisingly been coupled with a surge in trading volumes.

According to TradingView citing Binance data, volumes on Monday are already around 610K, even though the session is far from over. This is the highest since Sunday the 13th of November when volumes hit more than 1 million for the day and is significantly higher than recent weeks, where volumes have rarely exceeded 200K.

This Update Is Boosting AXS

On Monday, Axie Infinity announced a new initiative as part of its decentralization strategy via Twitter.

Axie Infinity has now officially established “Town Builders”, a team of 700 prominent community members, who will guide discussions on Axie’s new Axie Contributors platform on the future of the play-to-earn game.

The announcement comes after Axie Infinity shared its thoughts on how it could progressively decentralize Axie Infinity earlier this year. According to the crypto game’s website, Axie intends “to actively work towards an end-state where “invested” (with effort/meaningful contributions) community members are responsible for making resourcing decisions around the Axie Infinity ecosystem”.

Traders attributed this latest update as driving the jump in AXS’s price on Monday, given optimism that the latest decentralization push might revive some life into the game following a year of near-constant declines in player numbers. According to activeplayer.io, Axie Infinity had 468,805 players in the last 30 days. That compares to 2.78 million players in January of this year.

Price Prediction – What Next For AXS?

AXS’s latest price spike comes after token broke to the north of an ascending triangle that had formed since the middle of last month. On recent week, as AXS continued to post higher lows, prices were capped at the $7.0 area, resulting in a price squeeze. Ascending triangles often form ahead of a bullish breakout, and this was the case on Monday.

The latest jump higher from under $7.0 per token to current levels in the upper-$8.0s per token have seen AXS burst above key resistance in the $8.20-$8.50 area in the form of late October/early November lows. AXS’s rally on Monday, while seeing the cryptocurrency momentarily rise above $10.0 for the first time since a period of extreme two-way mid-November volatility, fell short of testing the next major area of resistance. That’s the support-turned-resistance area in the mid-$11.0s.

The cryptocurrency’s 100DMA near $10.50 acted as resistance on Monday. But as AXS falls back to test support in the low-$8.0s, may find buyers. Bulls may be hoping to see the cryptocurrency rally back to the north of the $10.0 level once again and take a run at the mid-$11.0 resistance area, ahead of a possible march towards the 200DMA in the upper $13s. That would mark a further at least 33% rally from current levels.

Dash 2 Trade is currently conducting a token pre-sale at highly discounted rates. D2T token sales recently surpassed $8.4 million. The sale is very close to entering its fourth phase, with over 96% of stage 3 tokens now sold. When the sale enters its next stage, prices per token will be lifted to $0.0533 from $0.0513. 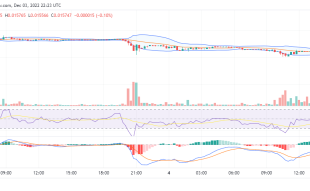 Tamadoge Price Prediction for the 4th of December: The Stage Is Set for a Bullish Run