Algorand price prediction remains bearish, as ALGO has fallen below the 50-day moving average that had been supporting it near $0.3475. Algorand (ALGO) coin has failed to maintain its previous bullish stance and has dropped significantly around the $0.3233 level, most likely as a result of bearish crypto market sentiment, which tends to undermine several cryptocurrencies, including Algorand coin.

The coin has been performing quite well in recent days, fueled by the excitement of the upcoming FIFA World Cup, which begins on November 20th and runs through December 18th. As a result, the World Cup event excitement has aided ALGO’s pricing as Algorand will be one of the event’s primary sponsors. Apart from that, the reason for its winning streak could be attributed to the most recent improvement in its network, which significantly increased its speed, among other things.

Although, the gains in coin values seem to be fading away as the market’s bearish mood overshadowed its all positive progress and excitement for the coming FIFA World Cup. It should be noted that the global cryptocurrency market failed to sustain its previous upbeat mode and lost momentum amid FTX’s bankruptcy and buyout by Binance news. This was confirmed after the majority of popular cryptocurrencies, including Bitcoin (BTC), Ethereum (ETH), Dogecoin (DOGE), Solana (SOL), Ripple (XRP), and Litecoin (LTC), plummeted yesterday. The cryptocurrency market value has fallen below $1 trillion, breaking a recent trend.

Throughout North America and Europe, Algorand will serve as a FIFA Women’s World Cup Australia and New Zealand 2023 Official Sponsor as well as a FIFA World Cup Qatar 2022 Regional Supporter. As a result, this was thought to be a significant factor that boosted the ALGO coin prices earlier.

Buy #Algorand #crypto ahead of #FIFAWorldCup as it has an official partnership with #FIFA !#btc #Etherium #BNBhttps://t.co/LZeL1AjzE4

Meanwhile, Algorand has joined FIFA as a blockchain partner. This demonstrates FIFA’s willingness to use its technologies in the future. For example, Algorand’s smart contracts power FIFA+ Collect, the company’s NFT platform. As a result, FIFA will most likely promote the NFT collection throughout the World Cup, increasing demand for the coin.

The ALGO coin, on the other hand, was supported by a major update to Algorand that significantly increased its speed. Block sizes may now approach 5 MiB with the most recent Algorand 3.9 version. In addition, typical round times have been reduced to less than 4 seconds. This means that Algorand can handle 6,000 transactions per second or over 26,000 transactions per block.

However, the ALGO coin’s gains faded as the overall bearish sentiment in the crypto market overshadowed its development and positive news.

The Algorand (ALGO) coin’s gains were also limited by a stronger US dollar, as cryptocurrencies have a high inverse correlation to the US Dollar Index (DXY). The broad-based US dollar was able to halt its previous bearish rally and drew some bids as the Asian market dipped slightly, indicating risk-off market sentiment and supporting safe-haven assets such as the dollar. Moving on, the focus is now shifting to the midterm elections and their results are awaited in the United States, which could signal significant changes in US economic policy.

This week will be volatile for Markets

Meanwhile, investors will be watching the October CPI inflation data from the United States, which is expected to show that price pressures remained stubbornly high.

On the technical front, Algoran is falling and may find immediate support near $0.2813. ALGO has formed a bearish engulfing pattern on the daily timeframe, indicating a strong selling bias. A triple bottom pattern at $0.2813 is likely to act as a major level for an ALGO price rebound, while resistance remains at $0.3400 and $0.3833.

Dash 2 Trade announced that LBank exchange will be the first CEX to offer its D2T token after raising over $5 million in its presale. After recently launching its public token sale, the company has reached that milestone. 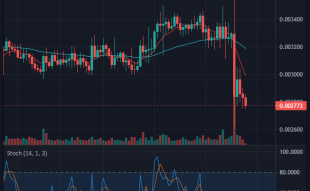 Battle Infinity Price Prediction for Today, November 9: IBATUSD Is Setting Up for an Increase