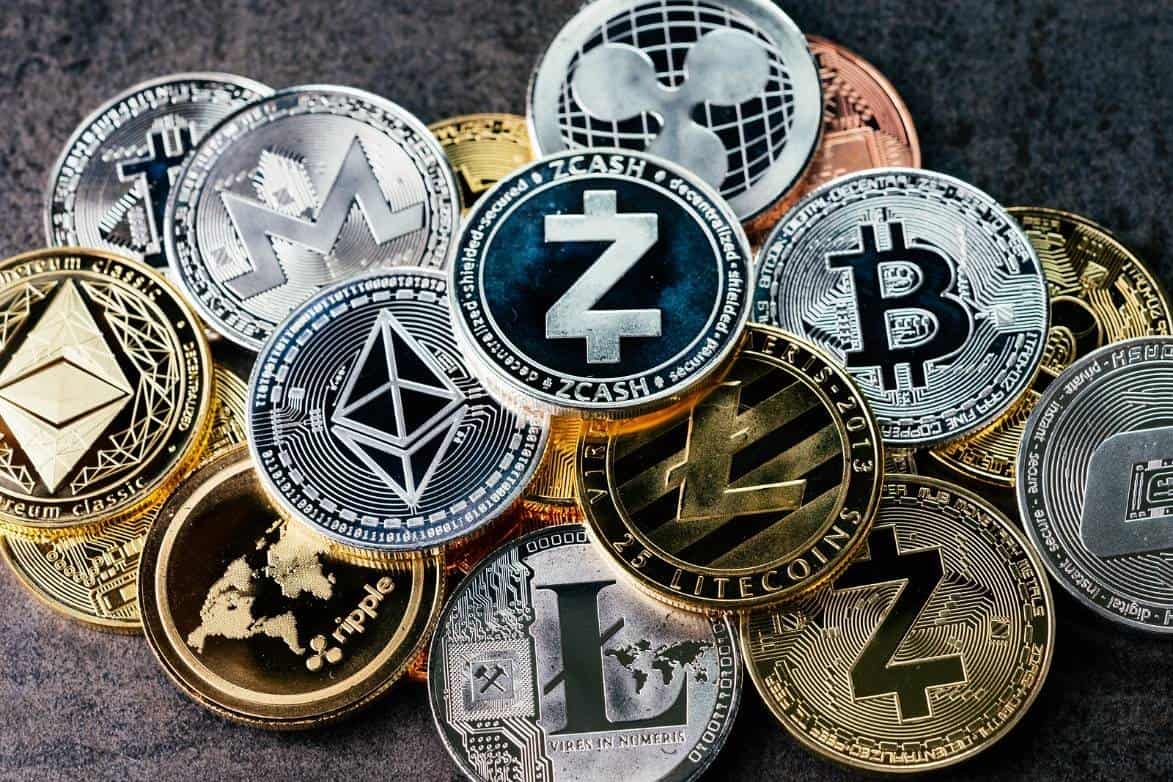 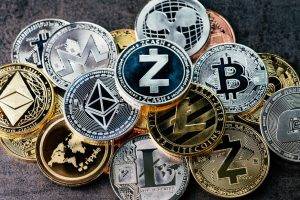 The cryptocurrency market has gained slightly today. Its total value has crept up to $2.19 trillion in the past 24 hours, having dropped to nearly $2 trillion yesterday. Altcoins are largely responsible for this increase, with bitcoin (BTC) actually declining a little. Chief among them was ethereum (ETH), which has jumped by 5% since yesterday. However, a number of newer altcoins have actually jumped by larger margins. Accordingly, we’ve picked our 5 best new cryptocurrency to buy now. This mostly covers coins which have been available for around a year or less. 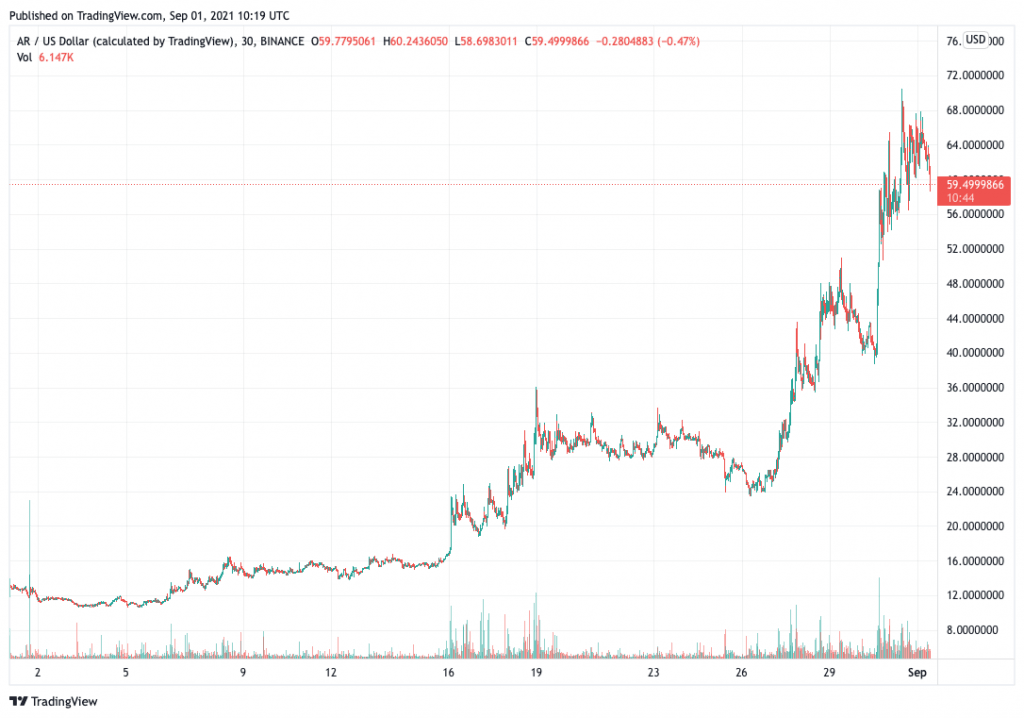 Arweave is a decentralised information storage network. Launched back in 2018, it has come to prominence more recently with the concurrent rise of Solana. That’s because its network underpins many of the NFTs and NFT platforms operating on Solana. As a result, an increase in Solana’s traffic has resulted in Arweave’s traffic also increasing.

Wild. @solana NFT apes in full force! 4x traffic increase to https://t.co/3S12ndZ16m in 12 hours.https://t.co/cXAcsN7S3I is scaling up as we speak, but remember: integrate dCDNs like @NetworkMeson and @Media_FDN to gain properly decentralised and fast access to permaweb data! pic.twitter.com/IMIpQQjQiW

Avalanche (AVAX) has just begun a rebound, having fallen over the previous couple of days. At $44.86, it’s up by 2% in the past 24 hours. This will go some way towards helping it recover from its 19.5% drop over the last week. Despite this fall, however, it has increased in price by 90% over the past fortnight, and by 250% over the past 30 days. These increases are enough to make AVAX the second best-performing coin over the last month, behind AR. 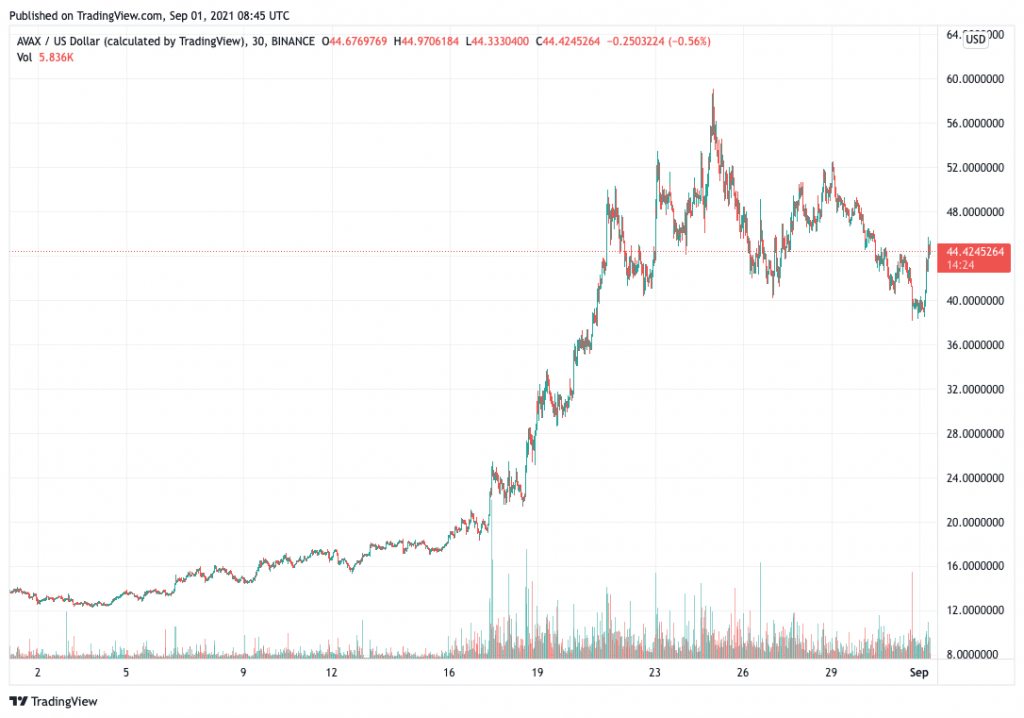 Fans of AVAX may be disappointed that it had recently climbed down from its previous surge. Nonetheless, it’s likely to resume rising once again, not least because it has already begun a recovery today.

Aside from being a high-speed blockchain in the mould of Ethereum, Solana, and others, Avalanche is notable for burning its transaction fees. Combined with its fixed maximum supply of 720 million AVAX, this burning policy will make it deflationary over time.

This has helped to invite interest in AVAX in recent weeks. Another key factor is August’s launch of Avalanche Bridge. This is a protocol that facilitates asset transfers between Avalanche and Ethereum, making it cheaper and easier than its predecessor, Avalanche Ethereum Bridge. Having launched at the beginning of last month, it has now already expanded to handle a total of $100 million in transfers. This offers some indication in why Avalanche and AVAX are becoming hot topics right now.

Today, AB officially transferred over $100M in tokens to and from Ethereum.

Another key factor in the rise of AVAX is the launch of Avalanche Rush on August 18. This is a liquidity mining incentive programme, rewarding users with AVAX for providing liquidity. Ava Labs — the developers of Avalanche — are collaborating with Aave and Curve are collaborating on its. This, in addition to Avalanche Bridge, has resulted in an influx of new users to Avalanche. And generally, more users equals higher demand and higher prices.

Experience the power of #Avalanche. Welcome to #AvalancheRush, the $180M liquidity mining incentive program in collaboration with leading DeFi dapps–both on and off Avalanche– starting with @aaveaave and @curvefinance. And, this is just Phase 1! https://t.co/YGrrVB7Uqc

This is why, after becoming available around a year ago, AVAX is now one of the best new cryptocurrency to buy now. 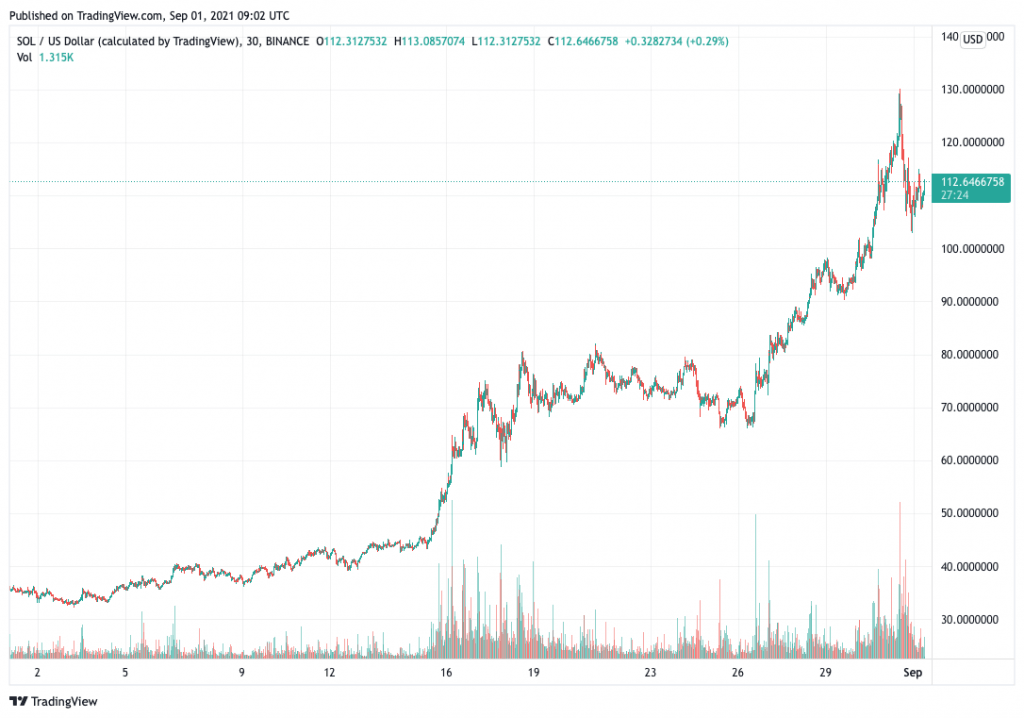 There are a couple of main reasons for SOL’s substantial growth in the past few days and weeks. For one, the launch of the Wormhole protocol on August 9 has helped it massively. This is another cross-chain transfer protocol, which permits users to send tokens between Solana, Ethereum, Binance Smart Chain and Terra. All four blockchains have benefitted from this, but Solana — and SOL — have benefitted the most.

Because of Wormhole, Solana’s total value locked has risen to $3.38 billion, having stood at $1.3 billion at the start of August. A 160% rise.

More generally, Solana is attracting growing usage on its own account. Its Solanart NFT platform is enjoying a number of larger sales, with one collection from the Degenerate Ape Academy recently selling over 7,000 pieces of art to date and passing $14.5 million (in SOL) in volume.

And while it launched its beta mainnet in March 2020, it hasn’t yet left beta. As such, SOL remains one of the best new cryptocurrency to buy.

Uniswap (UNI) is another coin that has started to attract serious momentum only recently. Its current price is $30.33, representing a 9% jump in the last 24 hours. It’s also up by 13% in the last week and by 37% in the last month. 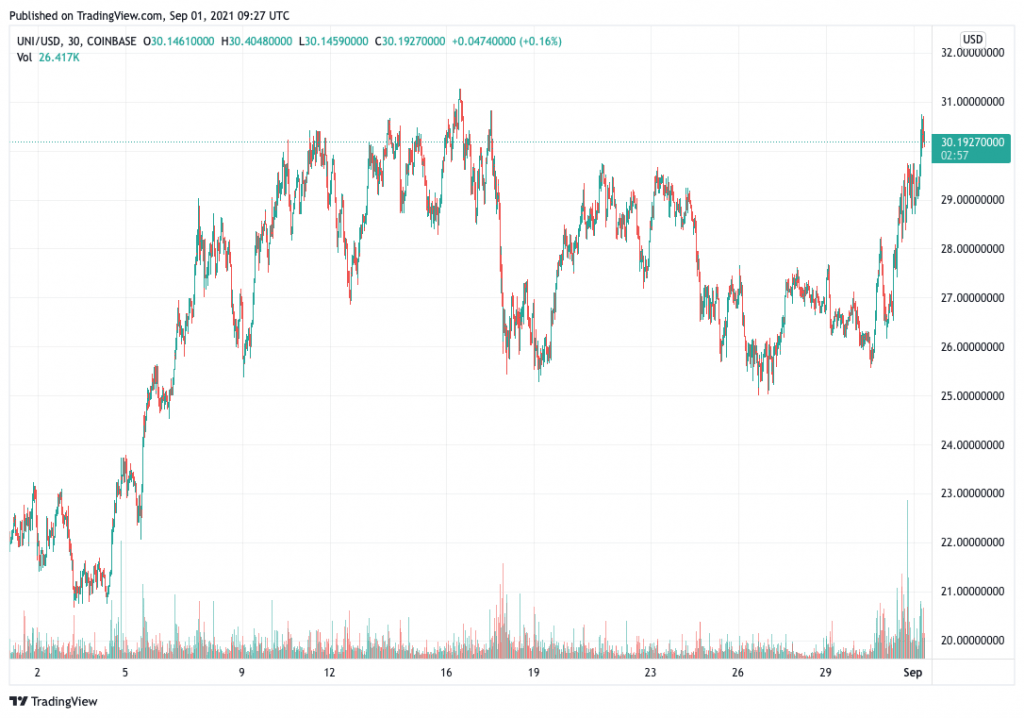 Uniswap is currently ranked sixth for total value locked among DeFi platforms, according to DeFi Pulse. It has just over $7 billion TVL, a figure which rose from $5 billion barely a month and a half ago. This follows on from the launch of Uniswap V3 in early May, which provides 4,000 times greater capital efficiency than V2. It also follows on from the launch of liquidity mining, which rewards users for staking.

🌊 We’re very excited to share that the Uniswap v3 liquidity mining contracts have been deployed to Ethereum mainnet and all testnets.

While the controversial Infrastructure Bill hasn’t yet been passed in Congress, it’s possible that Uniswap will benefit from it. This bill will extend tax reporting and know-your-customer requirements to most entities involved in transferring crypto. That said, an amendment — which has been added to the bill in its current form — explicitly excludes decentralised exchanges such as Uniswap.

1/ We didn't get the language we wanted in the final bill text. It's better than where it started, but still not good enough to clearly exclude miners and similarly situated persons.

Here's how it started and the final with the changes we were able to get. pic.twitter.com/Y0LSUf7UEY

If the amendment remains once the bill is finally passed, Uniswap could see a big surge. More users would likely flock to the exchange in order to avoid tax reporting rules, which in turn would increase demand for UNI. This is why we’ve chosen it as one of our best new cryptocurrency to buy now.

Polygon (MATIC) is rising significantly as we write this. At $1.44, it has risen by 4.7% in the last hour and by 6.6% in the past day, recovering from its recent selloff. Because it has fallen more or less consistently prior to this surge, it remains down by 3.4% in the last week. On the other hand, it’s up by 5.8% in the past fortnight and by 37% in the past month. 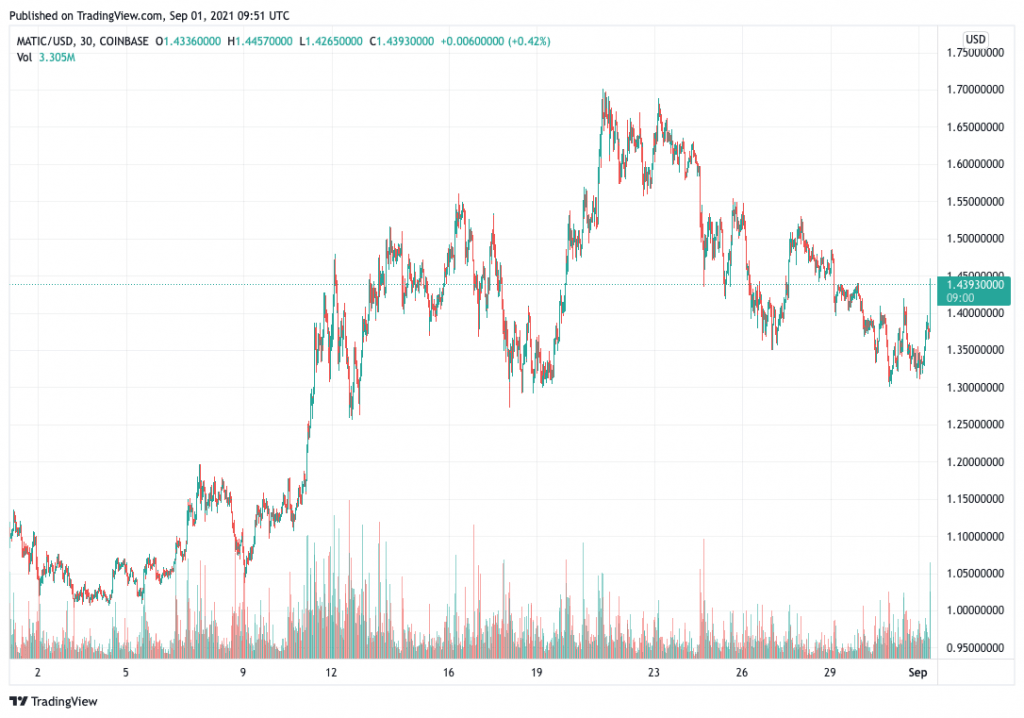 MATIC has been due to bounce back from its recent deep for a while. It’s a layer-two scaling solution for Ethereum, so given that ETH has been rising strongly in the past day or so, it too should rise in parallel.

Even without Ethereum’s good recent fortunes, Polygon has other good news to celebrate. Most notably, major exchange Coinbase announced yesterday that it will integrate Polygon as its first scaling solution for Ethereum. This is big news for the platform, and is the likely short-term cause for the current spike.

Aside from yesterday’s news, Polygon announced plans in mid-August to launch a DeFi-focused decentralised autonomous organisation (DAO). This has helped push it higher in recent weeks, adding momentum in conjunction with its acquisition of rival layer-two scaling solution Hermez. On August 13, it also announced a strategy aimed at developing zero-knowledge scaling solutions, which would be supported by $1 billion in funding.

We are announcing a strategic focus on ZK-based scaling solutions and $1B in funding for this effort.

As our first big foray into the exciting world of ZK, we are excited to announce the merger/acquisition of @hermez_network! 🔥

At the moment, Polygon boasts some $10 billion in total value locked in. This figures stood at only $7 billion a month ago, and $2 billion in late April.

Cosmos is among the leading gainers in the crypto charts despite major cryptocurrencies such ...