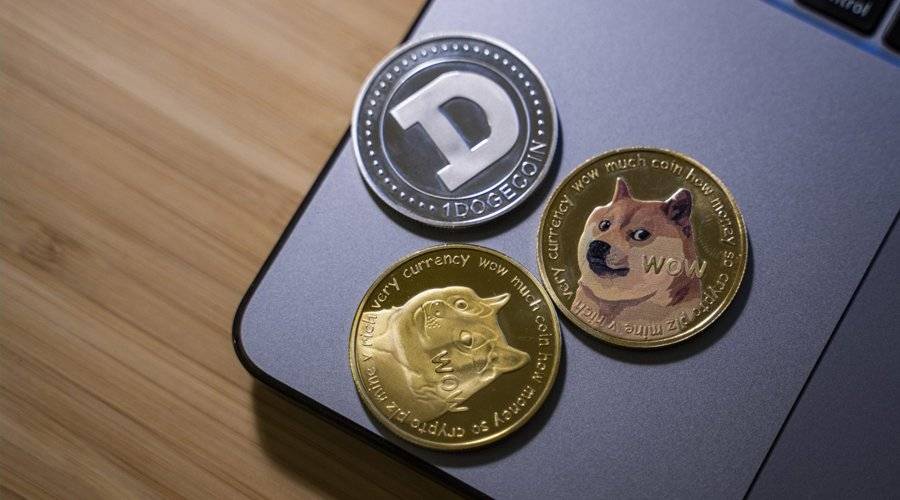 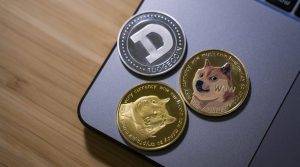 Meme coins provide an incredible opportunity for crypto investors to turn a quick profit. Unlike cryptocurrencies such as Bitcoin and XRP that have specific use cases, meme coins aren’t exactly functional. Following the rise of Dogecoin in 2021, meme coins have been a hit in the crypto market. More investors have been open to the opportunity of purchasing and investing in them, so we’ll look into the most popular of these coins below. 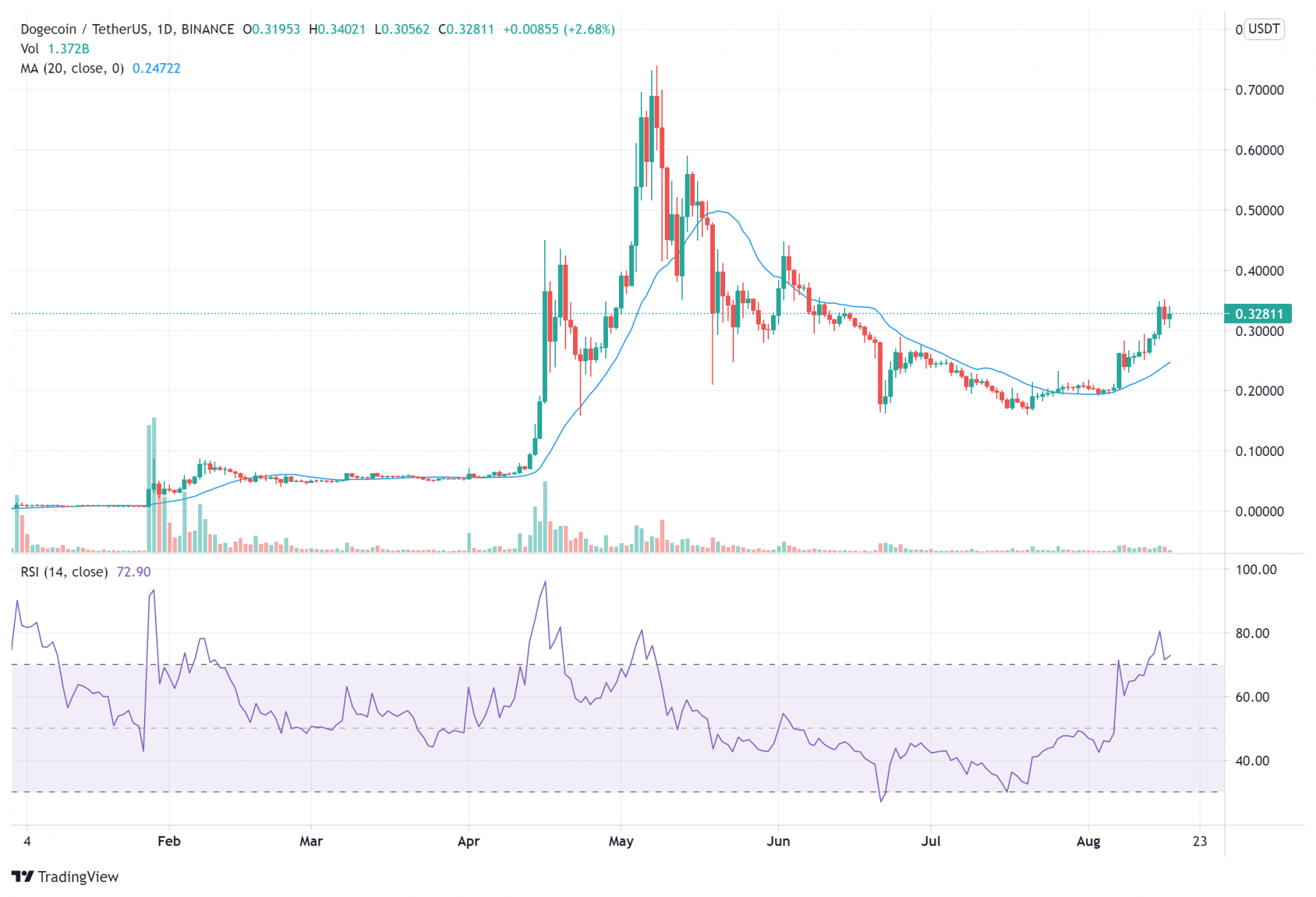 It goes without saying that Dogecoin remains the most popular and profitable meme coin. Created as a joke in 2013, Dogecoin has quickly risen to the ranks as a result of hype from millions across the world – including prominent celebrities like Elon Musk, Miley Cyrus, and Snoop Dogg.

If Bitcoin is a bellwether for the entire industry, Dogecoin fills that role for meme coins. It’s impossible for these coins to move without a substantial shift in Dogecoin’s price.

Over the past week, Dogecoin has been on something of a tear. The asset’s price rose by 25 percent, settling at $0.32 at press time. The current price peg is down 2.8 percent in the last 24 hours, but the drop appears to be a simple downtrend as it sets up for consolidation.

Philip Gradwell, an economist at Chainalysis, explained earlier this week that on-chain metrics for Dogecoin are better than ever, with the coin’s adoption rising to its highest point since the 2017 bull market. With the DOGE community always ready to flood in at every opportunity, this could be a chance to buy in.

DOGE is doing quite well technically, holding above its 20-day moving average (MA) of $0.24 and with a relative strength index (RSI) of 73.91. 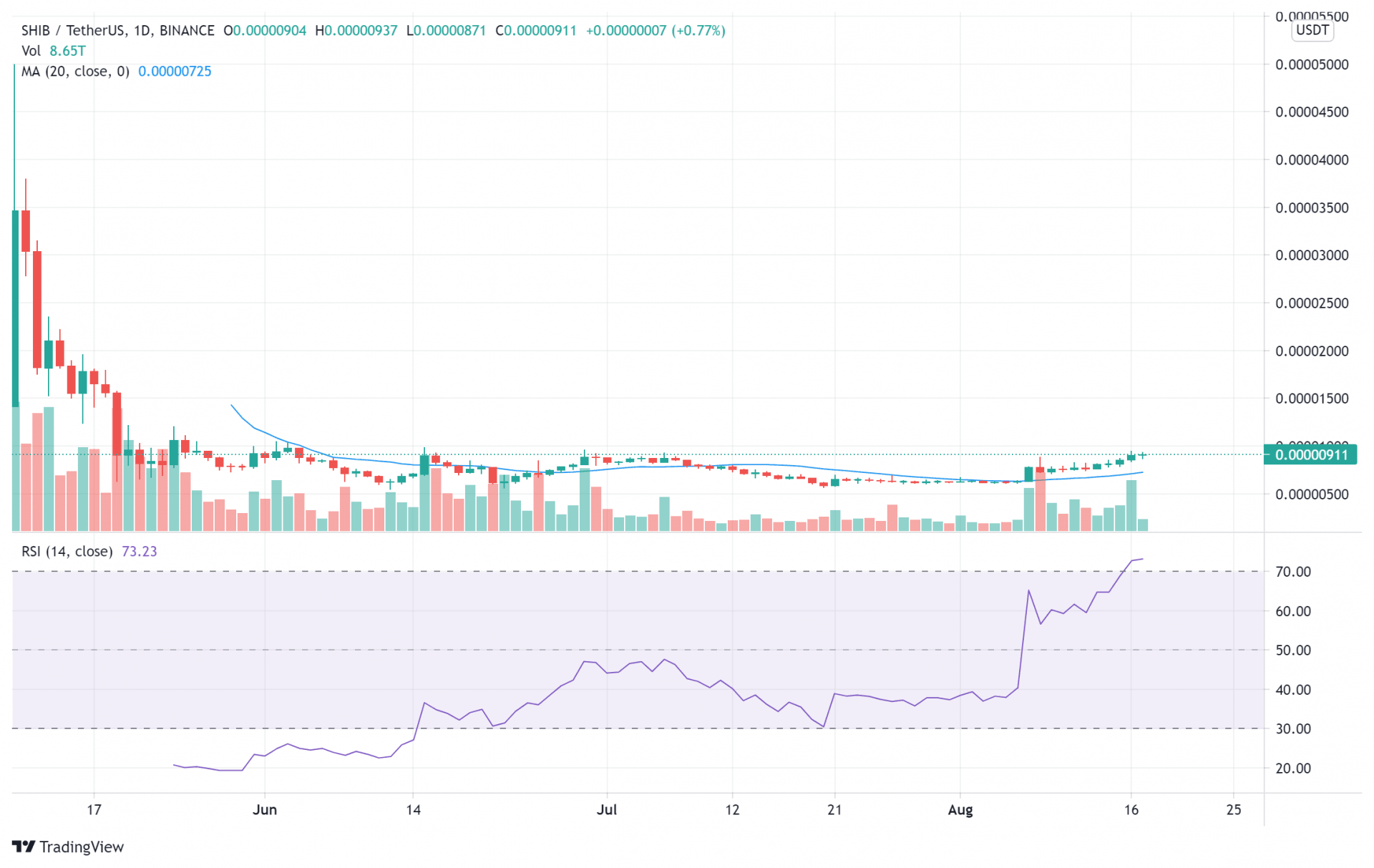 Shiba Inu has been even more impressive than Doge, rising to become one of the most popular cryptocurrencies despite being less than a year old.

In fact, SHIB didn’t become prominent in any form until April 2021. After getting listed on a few top exchanges and marketing itself to be the “Dogecoin killer,” SHIB took off. The coin got listed on major exchanges like Coinbase and Binance, and it rocketed to the top of the CoinMarketCap charts.

SHIB’s recovery can be traced back to July 20, when it bottomed at $0.0000057. The coin’s price has since seen a 300 percent jump in its 24-hour trading volume, as well as a 56 percent price rally. The coin’s developers also implemented a token burn, reducing its circulating supply. 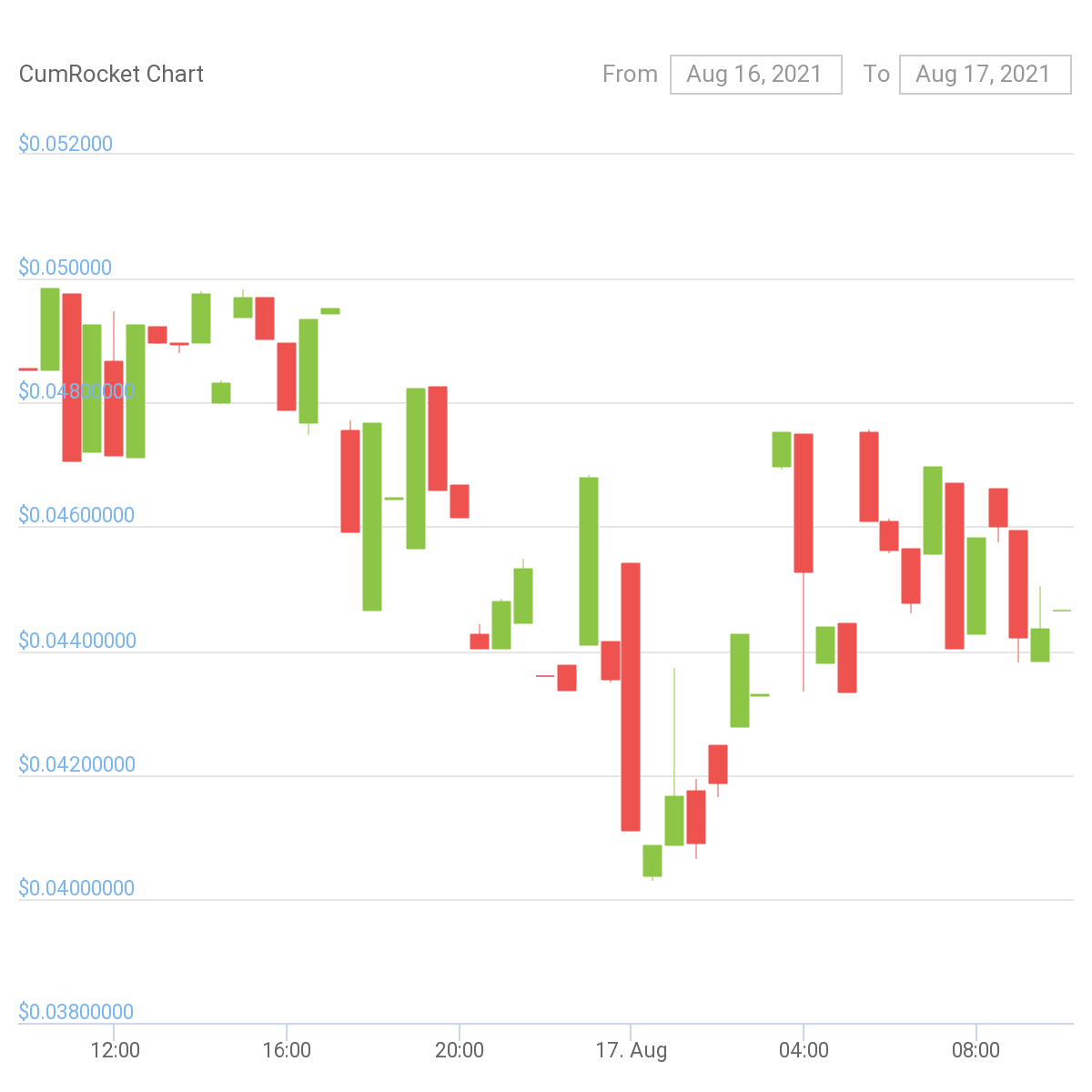 Cumrocket is a pretty rare name among the meme coins. Many of these coins tend to be made for the “vibes,” but Cumrocket actually has a use case. Built in April 2021, Cumrocket offers a marketplace for adult content on the internet.

Cricket hasn’t quite hit its stride, mostly because adult content is pretty much free on the internet. It’s also not gotten any celebrity hype – just a passing mention on comedian Bill Maher’s HBO show.

But, Comrocket is something you want to keep an eye out for nonetheless. The asset’s price is up a staggering 103.2 percent in the past week, with a current price of $0.0044. Its current peg is down 12 percent in the past 24 hours, but this shouldn’t be much of a concern given how meme coins perform. 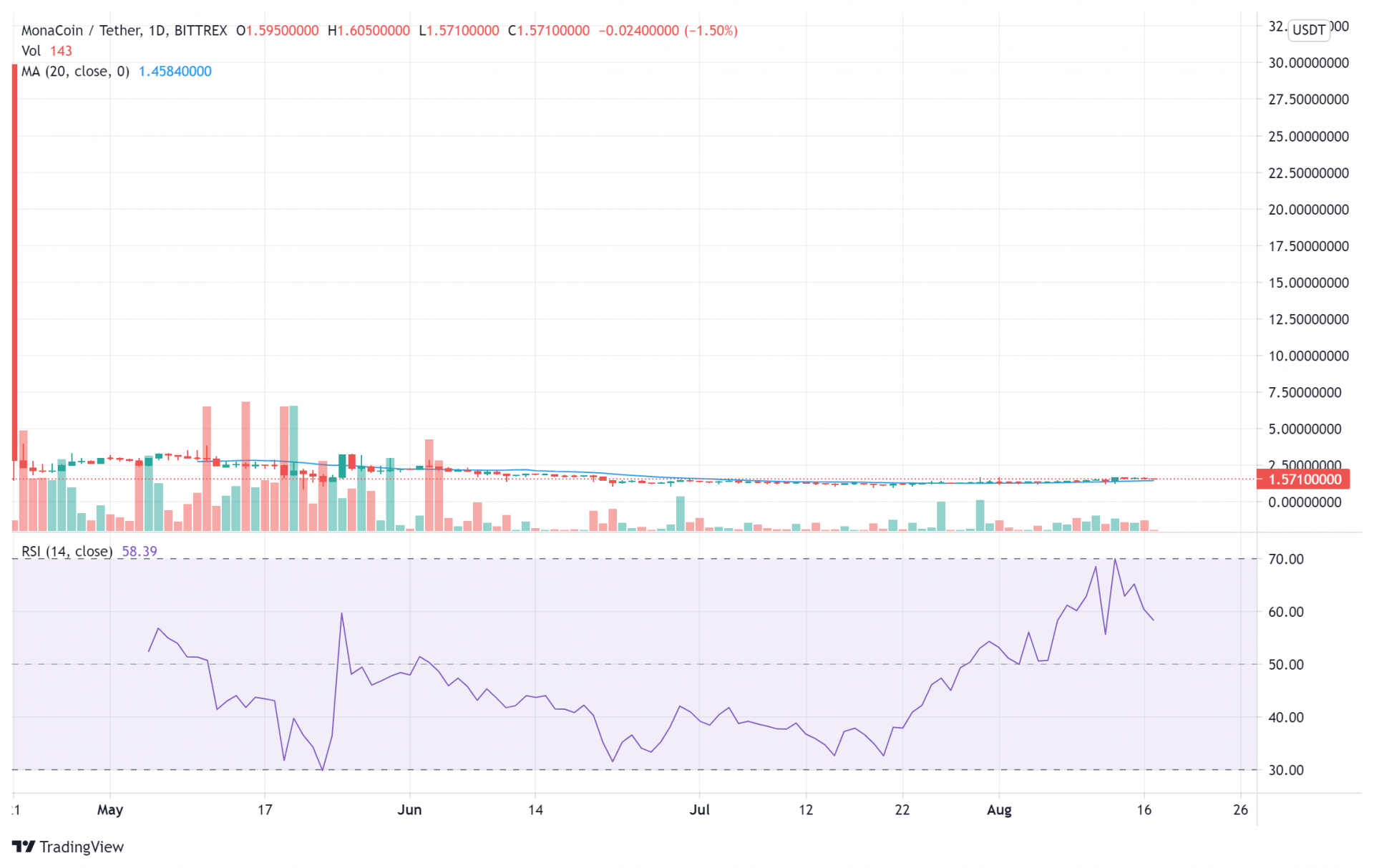 Monacoin actually started with a use case. Created in 2014, it was dubbed as Japan’s first digital currency and built to replace more established coins like Bitcoin and Ether for Japanese investors, Monacoin also focused on peer-to-peer digital transactions, offering a chance for investors to easily send and receive money.

But, with the increased penetration of established coins, Monacoin became an afterthought. Soon enough, the coin was left with no purpose – except memes!

Monacoin doesn’t have much in terms of news and updates. But, the coin gets a bit of buzz from investors now and then. A growing number of people believe that it can be the next Dogecoin, and they’re waiting for its price to surge.

As shown, MONA is a bit of a gamble. But, that’s what meme coins essentially are. 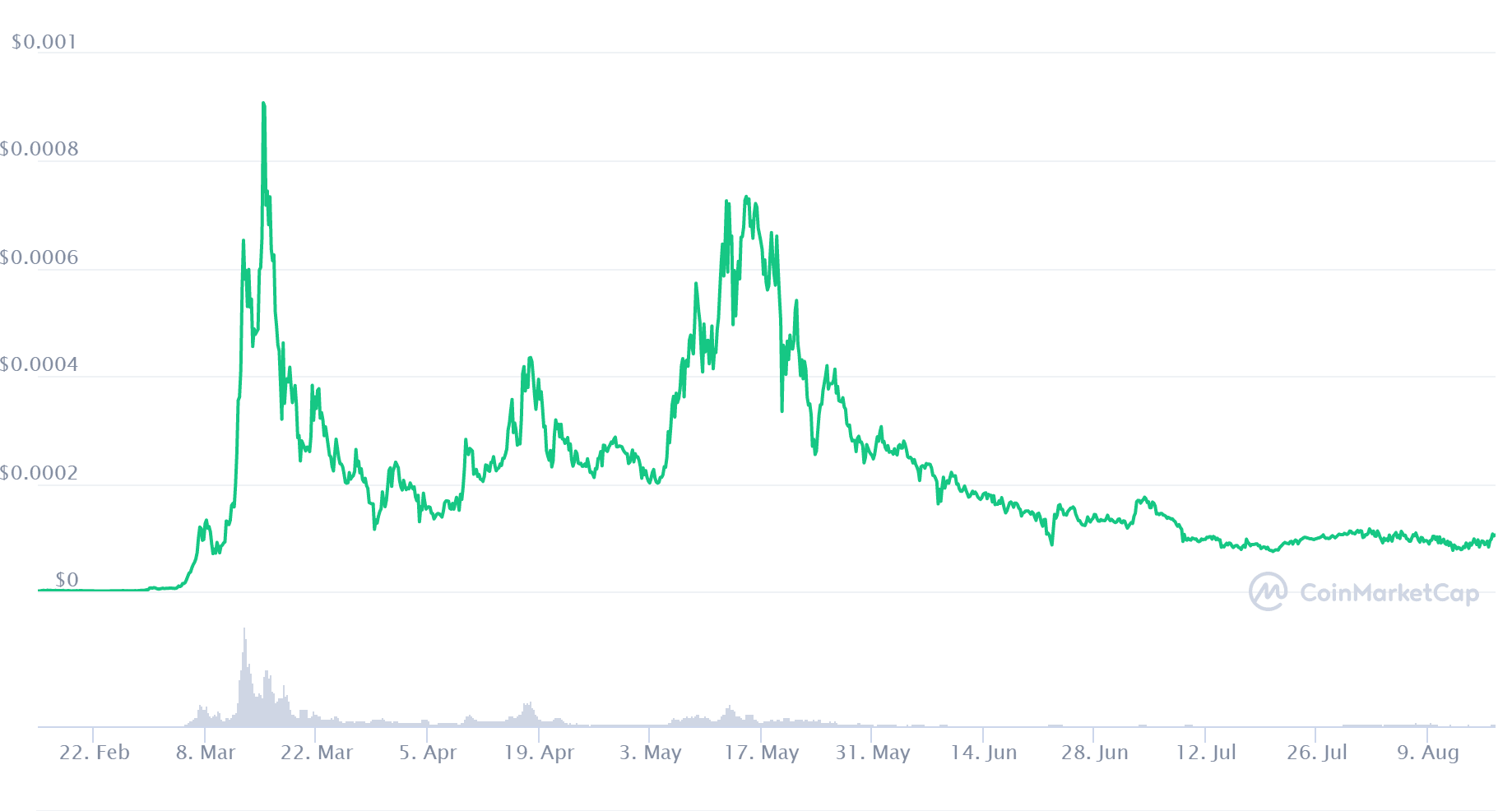 Hoge Finance is a self-described community-driven auto-staking ERC-20 token. Launched in February 2021, HOGE had an initial supply of 1 trillion. But, 500 billion of that was immediately burned.

Among the meme coins, HOGE is peculiar as it is a deflationary asset. For every transaction that takes place, a 2 percent tax is levied – 1 percent goes to the burn wallet and is immediately removed from the supply, while the other 1 percent is redistributed to all wallets that hold HOGE outside of crypto exchanges.

HOGE Has also begun minting non-fungible tokens (NFTs) and sponsoring eSports teams. The coin is still in its nascent stages, but there is a lot of growth potential in HOGE. It definitely helps that the coin’s price has performed pretty well recently. With a peg of $0.000104, HOG is up by 7 percent in the past week. In the last 24 hours, HOGE is up by an impressive 12.6 percent too.

Beyond just being a meme coin, HOGE has some long-term potential too. The coin is still far from its all-time high of $0.00090, but it is looking quite attractive.