The cryptocurrency market has suffered a slide after its modest Christmas gains. Its total cap has fallen by 3% in the past 24 hours, to $2.45 trillion. This dip has also seen most major cryptocurrencies fall by 3% or more over the same timeframe. However, with the market remaining subdued compared to peaks earlier in the year, there are still bargains to be had. As such, this article puts together the 5 best cryptocurrency to buy at low prices right now. This covers coins priced below $100. 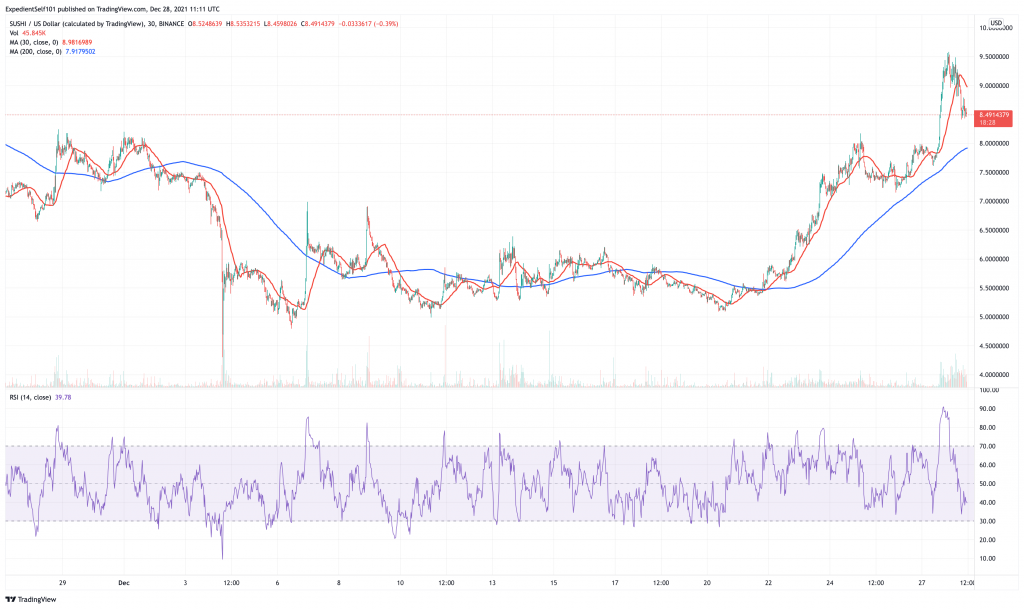 SUSHI’s indicators peaked yesterday, with its relative strength index (in purple above) reaching 90. This would indicate that its market is overbought. However, its RSI has since climbed down to 40. Meanwhile, its 30-day moving average (in red) remains well above its 200-day average (blue). In other words, it could very well still be in the middle of a rally.

SUSHI is the native token of SushiSwap, an Ethereum-based decentralised exchange. It currently has $5.3 billion in total value locked in, according to DefiLlama. This makes it the 14th biggest platform in the DeFi ecosystem overall.

One of the reasons why SUSHI is rallying is that it’s recovering from an unexpected slump in early December. This happened after SushiSwap’s CTO, Joseph Delong, resigned in the midst of governance conflicts.

This departure precipitated a drop as low as $5.11 for SUSHI on December 11. Fortunately, the dust appears to have settled with regards to recent governance disputes, with SushiSwap’s community voting through a series of structural proposals in order to stabilise things.

And with SushiSwap continuing to welcome new integrations, we expect that the resolution of governance woes could push SUSHI even higher. This is why it’s one of our 5 best cryptocurrency to buy at low prices. 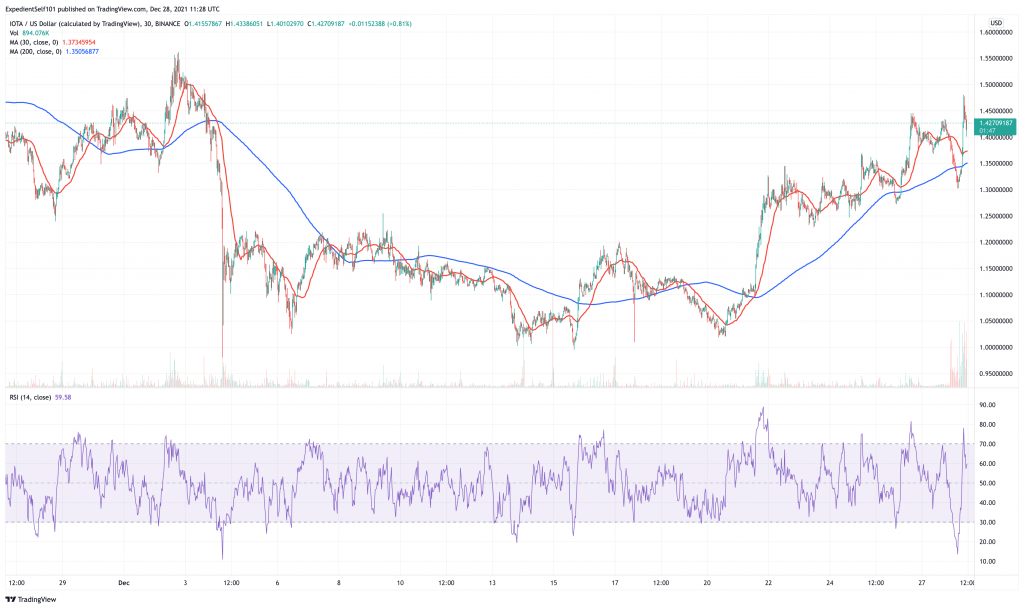 IOTA’s indicators continue to show good momentum. Its RSI is at 60, having shot up from just under 20 yesterday. Its 30-day average is also climbing above its 200-day, suggesting that it may be reaching new levels.

IOTA is has been rallying over the past week or so due to the arrival of staking on Iota. Iota first announced this on November 16, but it began rolling out the feature on December 21.

Needless to say, staking has boosted and will continue to boost demand for IOTA. And with Iota also continuing to build out its ecosystem and smart contract capabilities, we don’t see its current good fortunes ending anytime soon. 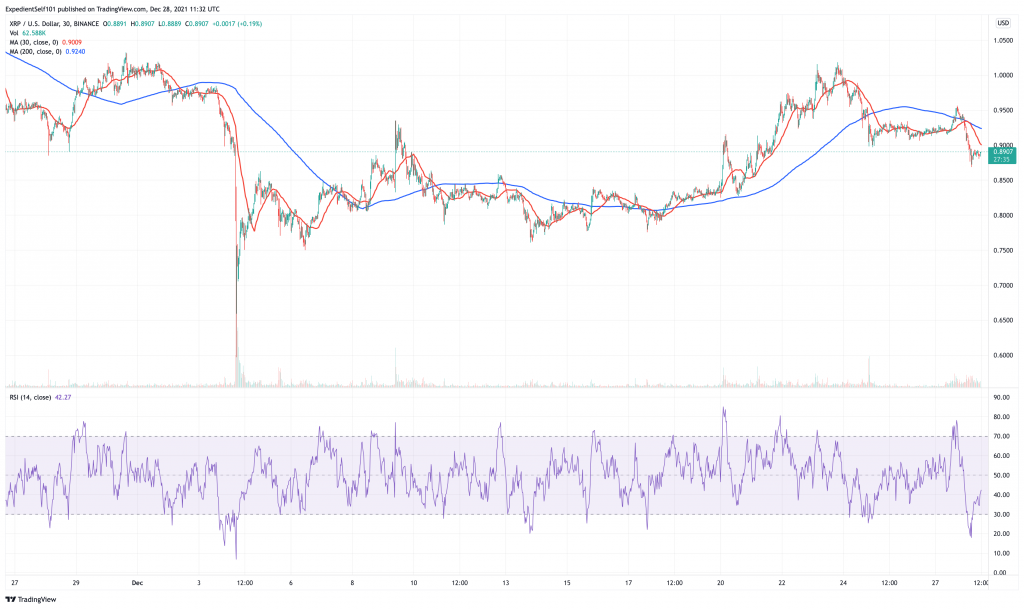 XRP’s indicators suggest that the market is currently overselling it. This points to the possibility that it may be hitting a bottom, and that it’s going at a big discount.

More fundamentally, the one-year anniversary of the SEC’s initiation of legal action against Ripple has prompted the XRP community to contemplate the likelihood of a favourable settlement for Ripple. And while much of this contemplation is obviously wishful thinking, recent threads and updates from lawyer John E. Deaton offer a reminder that the SEC’s case may not be particularly strong.

The SEC informs the Judge that the SEC does not typically decide whether a particular instrument is a security per se, but, at the same time, it argues that because @Ripple created a secondary market for #XRP – all #XRP in the secondary market are securities. It’s schizophrenic. https://t.co/a2kKCNbckY

While there’s still no obvious endpoint for the case, a decision in Ripple’s favour would undoubtedly send XRP surging. And with Ripple having a good case (according to lawyer’s working within the cryptocurrency sector), there’s a chance this could happen at some point early next year. This is why XRP is one of our 5 best cryptocurrency to buy at low prices. 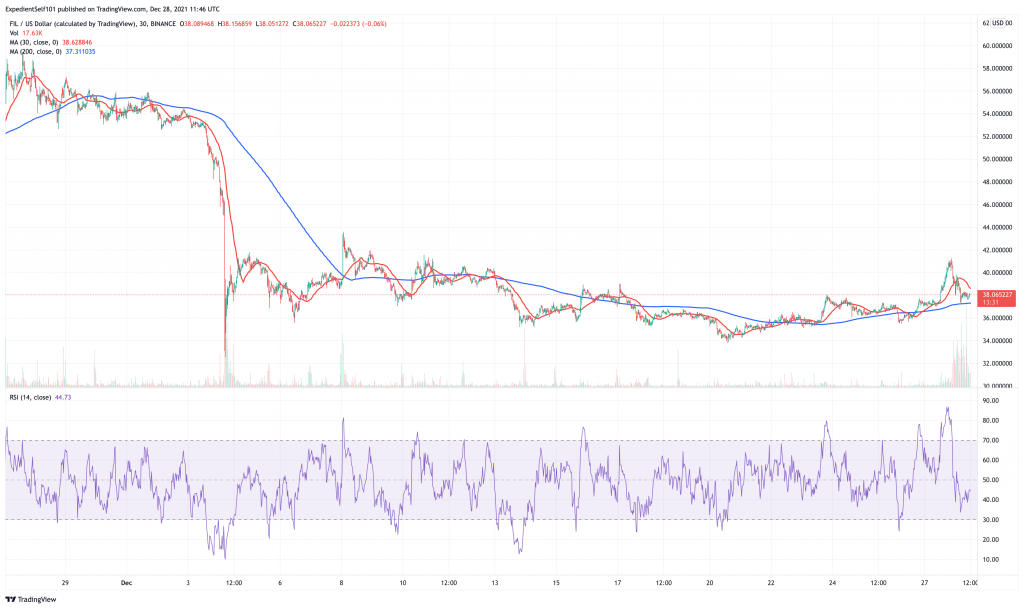 FIL’s relative strength index is only just above 40. This may suggest a swing back upwards, particularly when FIL has plenty of ground to recover compared to one month ago.

And there’s every chance that FIL will recover its lost ground. That’s because its native platform, the decentralised storage network Filecoin, has had a strong year of growth.

For example, Filecoin announced in May its own NFT.storage service. Given the expansion of the NFT sector this year, this launch will help Filecoin to expand in parallel. Likewise, its launch of a similar Web 3.0 storage service in August will have a comparable effect, particularly as Web 3.0 applications grow next year.

And in August, Filecoin announced a partnership with Polygon (MATIC). This will create a storage bridge between the two platforms, with any developer now able to store Polygon’s data on Filecoin.

½ 📢 @Filecoin is coming to Polygon!

Because of such launches, Filecoin has seen its ecosystem grow considerably this year. As of November 30, it boasted just over 270 new apps developing on its network, as well as the storage of 33 PiB (over 37,000 TB) of data.

2/ As of the Nov 30, the Filecoin has had…
⭐ 270+ incredible apps building on the network
⭐ 650+ new projects entering the ecosystem
⭐ 13.85 EiB of network storage power
⭐ 3.5K storage providers
⭐ 33 PiB+ of data stored on the network
⭐ 8K devs contributing on GitHub pic.twitter.com/RFV59hLyrJ 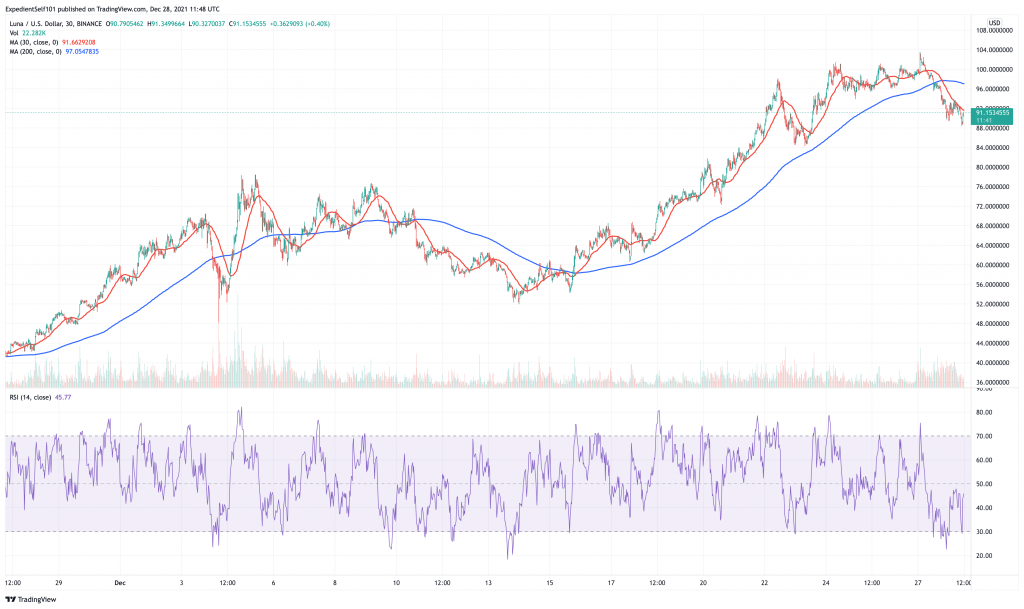 LUNA’s indicators suggest that the time is ripe for a strong upswing. Its RSI is rocketing up from a low of 30 earlier today. Meanwhile, its 30-day average may have just hit a bottom relative to its 200-day.

Terra’s fundamentals remain as strong as ever, making a good case that its dive yesterday was only a blip. Its total value locked in has touched $18.45 billion, making it the second-biggest DeFi system after Ethereum.

The platform has also been busying announcing new partnerships and integrations. It launched the first Cosmos-native UST/LUNA trading pair a couple of weeks ago, while it also partnered with NEAR and Aurora last week. Such collaborations will only expand its growing ecosystem, easily making it one of our 5 best cryptocurrency to buy at low prices.

For the most part of this month, the crypto market has been consolidating. Bitcoin ...

Azeez Mustapha •Updated: 25 January 2022 Updated:: Updated: 25 January 2022
View All News
Note that the content on this site should not be considered investment advice. Investing is speculative. When investing your capital is at risk. This site is not intended for use in jurisdictions in which the trading or investments described are prohibited and should only be used by such persons and in such ways as are legally permitted.