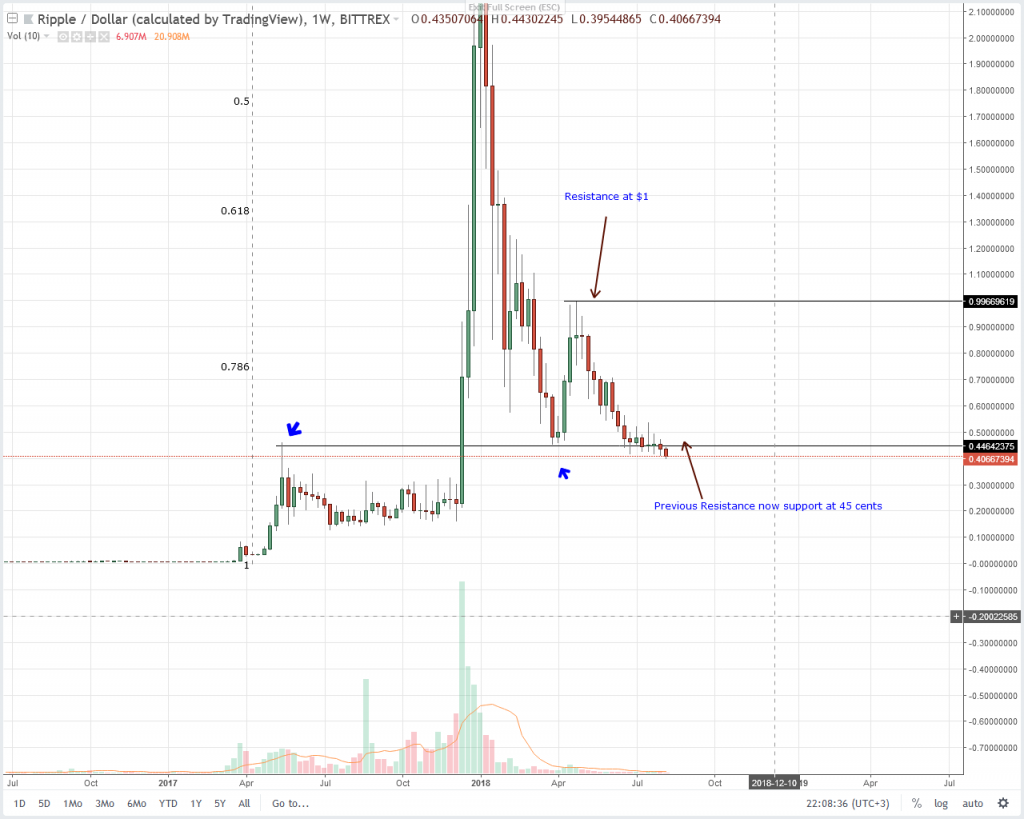 Technically, XRP prices are breaking off the 40 day horizontal consolidation and retesting the lower limit of our 5 cent trading zone at 40 cents. Because of this and the way our XRP trade plan dictates, we suggest selling at every pull back with first targets at 30 cents and later 15 cents—our ultimate level.

We also remain cognizant that any high volume spike in prices above 45 cents cancels this projection and snaps XRP back into a range trade.

#Japanese #financial services giant #SBI Holdings will expand its #crypto business portfolio by acquiring a 12% stake in Clear Markets, according to SBI’s financial results report published July 31. SBI is scheduled to acquire up to 20% in the future. 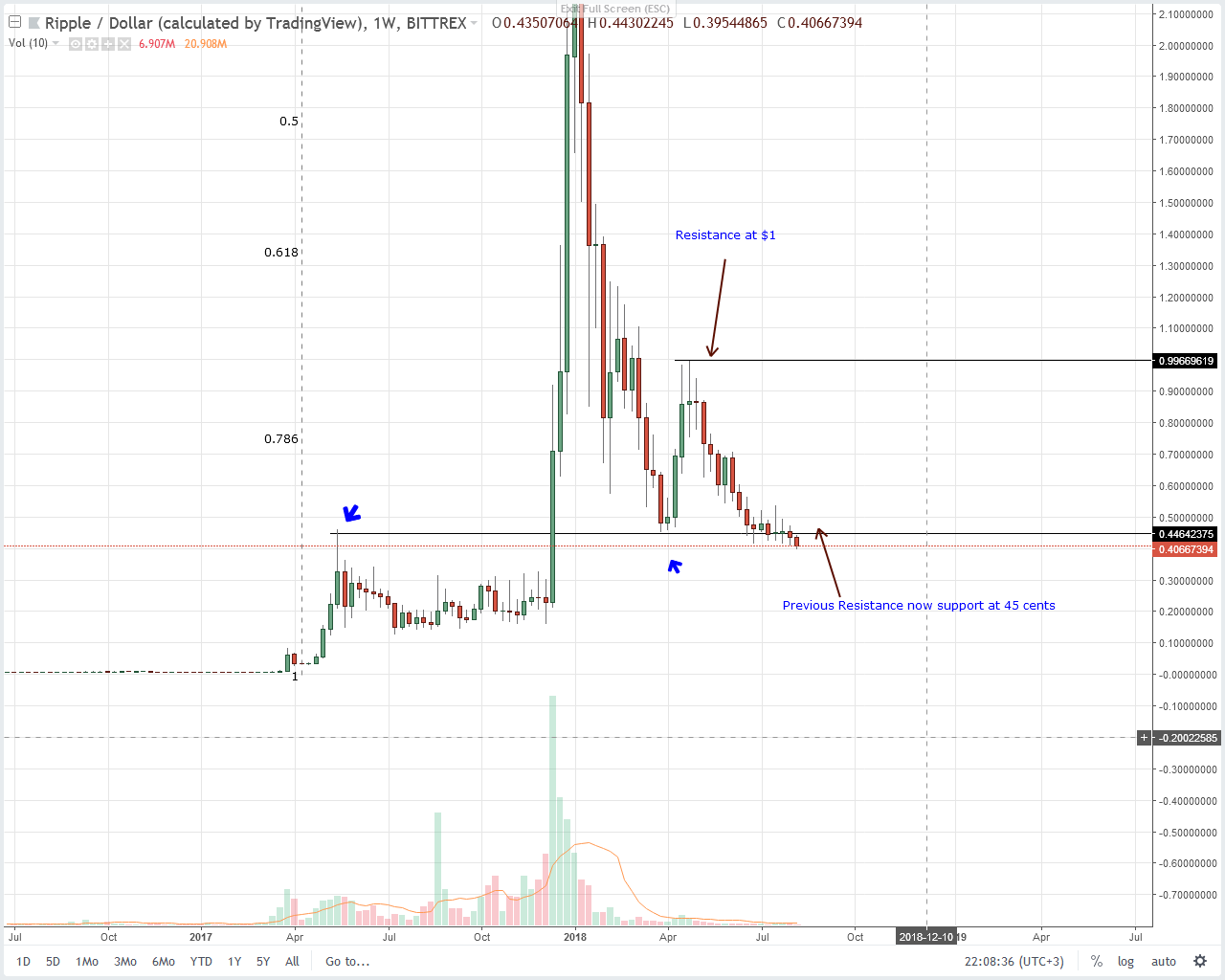 A single non-technical glance at the weekly chart hints of lower lows. Why not, XRP is still correcting trickling down for the seventh consecutive month shedding over 80 percent from their ATHs.

Besides, when we refer to previous XRP technical analysis and trade plan, we can easily see that we have a whole XRP bear candlestick printing below 45 cents following last week’s six percent losses.

Retweet if you know what happens when we reach the corner of this triangle! Hint hint.. It has horns… #XRP #XRPthebase #XRPtheHedge #BTC #ETH #LTC #Crypto #Fintech pic.twitter.com/Ljl7aBtdWR

Now, considering the way technical formations are arranged, we might see a confirmation of last week sellers. In that case, any close below the lower limit of our support zone at 40 cents will automatically trigger sell in line with our XRP trade plan.

When that pans out, then we shall trade according to our well laid out XRP trade strategy, unloading on every high with first targets below 20 cents. 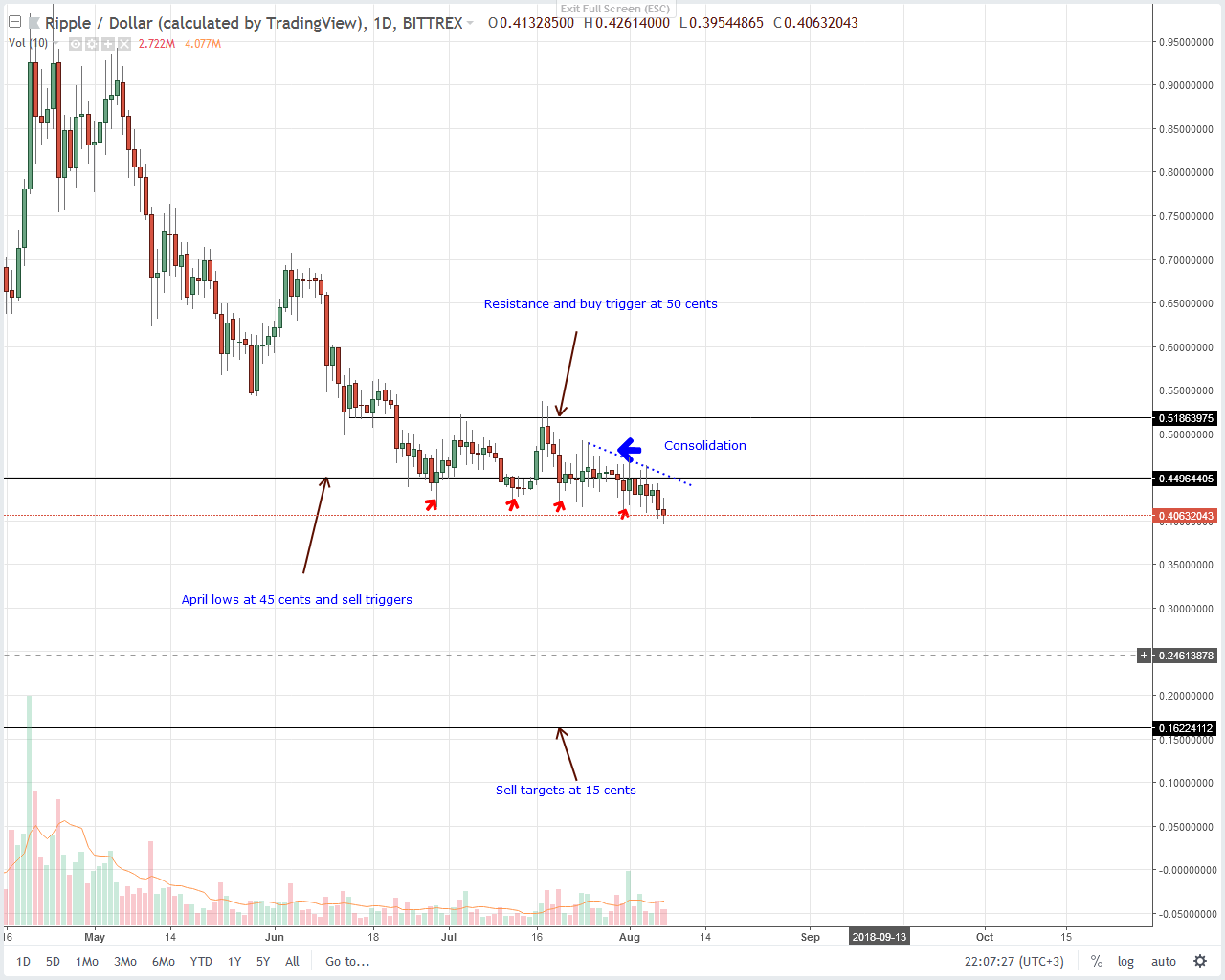 Overly, the altcoins market has to contend with sell pressure. With every lower lows, the path of least resistance is definitely on the down side.

Thus far, XRP is down four percent in the last day following the precedence set by Aug 6 bear candlestick which saw prices conclusively closing below the trade range and 45 cents.

In any case, I recommend selling on every high with stops at Aug 6 highs at 45 cents and targets as aforementioned above.

The post XRP Technical Analysis: XRP Here To Stay Regardless of Price appeared first on NewsBTC.