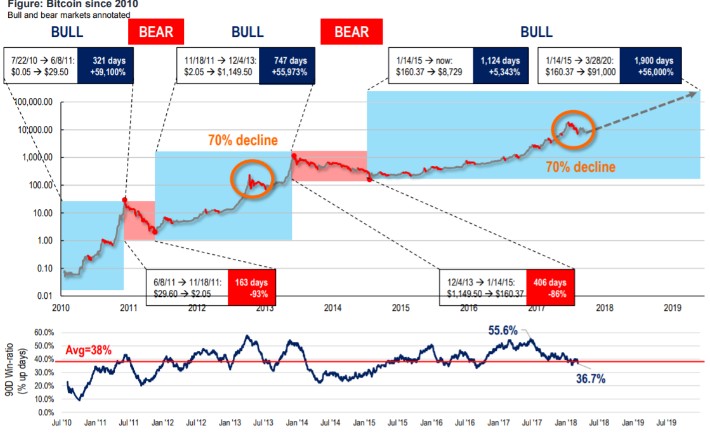 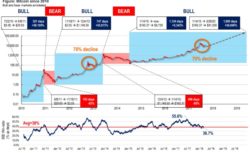 As bitcoin’s falling prices makes for a negatively fueled mainstream media headline, the market’s top fund managers are not fazed. Instead, they believe the market is still in an uptrend and is poised to keep increasing.

Tom Lee of Fundstrat Global Advisors, a Wall Street fund which has been historically bullish on bitcoin, strongly believes that the digital currency is still in a bull phase. In a note to clients, Lee was bullish on bitcoin even after a 70 percent fall from its all-time high in December 2017.

The framework Lee uses for purposes of valuing bitcoin is based on three factors;

“Based on a theorem based by George Gilder, which is the value of a network is the square of the number of users. And so if you build a very simple model valuing bitcoin as the square function number of users times the average transaction value. 94 percent of the bitcoin moved over the past four years is explained by that equation.” – Tom Lee.

In short, this explains the network effect. For example, the first fax machine was worthless because no one else used it and hence it held no utility. But once all of a person’s friends have fax machines, it becomes very valuable.

So has this been effective in valuing things, in the past, that have a strong network but weren’t producing any money.

“We have seen a lot of technical damage since March 6,” said Robert Sluymer, technical strategist at Fundstrat. Sluymer added that the failure to take out the important $11,750 level has worsened the short-term technical view. However, they see the February low of $5,922 as a major low, meaning it will be tough to breach.

A slew of negative news has seen the price of digital assets come under immense pressure over the past two weeks. Bitcoin fell ten percent on Wednesday, March 14 marking its eighth consecutive losing day out of the last ten. “March is typically the worst month for bitcoin, rising one of last seven years,” they wrote in sharing the following chart.

However stunning the figures on these crypto predictions may be, their percentage gains pale in comparison with 2017’s massive returns. Bitcoin gained 2,000 percent in the 12 months leading up to its December peak above $19,800 on Coinbase. Ethereum leaped roughly 9,600 percent to above $770, according to CoinMarketCap. And ripple, or XRP, blew both away by soaring well over 35,500 percent to $2.30 at the end of 2017.

Crypto Featured for First Time in US Congress Economic Report