Homenewsthe cryptocurrency market needs a solution to the hacking menace 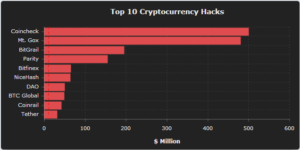 The Coinrail hack of June 10, 2018, led to the theft of more than $40 million in cryptocurrency. Although not one of the more prominent exchange platforms, the Coinrail hack is yet another reminder of the tenuous nature of the emerging digital currency landscape.

According to CryptoAware, more than $670 million was lost due to cryptocurrency hacks in the first quarter of 2018. This figure has risen to $1.1 billion in the second quarter of 2018. The year began with the Coincheck heist, one of the biggest digital currency thefts in the history of the market. Almost half a billion dollars’ worth of NEM tokens were carted away from the Tokyo-based exchange by suspected cybercriminals. The incident served as the catalyst for sweeping changes in the Japanese cryptocurrency landscape.

Long-time cryptocurrency aficionados no doubt remember the Mt. Gox hack and the DAO hack. The former is the largest Bitcoin hack while the latter is the most massive Ethereum hack. Both had profound impacts on the virtual currency landscape leading to arrests and hard forks. Perhaps most importantly, they revealed the alarming security issues plaguing cryptocurrency investments.

Blockchain enthusiasts often say the technology is immutable and theoretically cannot be hacked. However, in 2018, blockchains like Verge, Bitcoin Gold, and Electroneum suffered repeated 51 percent attacks. Even if cryptocurrency exchanges are easy targets for cybercriminals, blockchains should be more secure. In reality, as the aforementioned attacks demonstrate, this clearly isn’t the case.

From startups to exchanges, and even blockchains, the situation is largely the same – hackers are having a field day. A recent report by Qihoo 360 Netlab revealed that hackers now crawl the web scanning for unsecured nodes on Ethereum-based apps. So far, one group has even managed to steal $20 million in Ether.

An asset class that wishes to attain legitimacy in the mainstream finance environment can do with fewer levels of vulnerabilities. $2.3 billion lost to hackers since 2011 is a troubling statistic. Even more worrying is the fact that several unreported cases don’t make it to the news.

The activities of cybercriminals are a clear and present danger to the legitimacy of the cryptocurrency market. Before any sustainable progress can be achieved in the market as far as widespread adoption is concerned, stakeholders need to find a solution to the coin theft problem.

How important do you think it is for the community to develop a lasting solution to the hacking problem? Do you have any suggestions that could aid stakeholders in their quest to arrest the situation?  Share your views with the community in the comment section below.

The post The Cryptocurrency Market Needs a Solution to the Hacking Menace appeared first on Bitcoinist.com.

Cryptowisser – A new star in the crypto sky