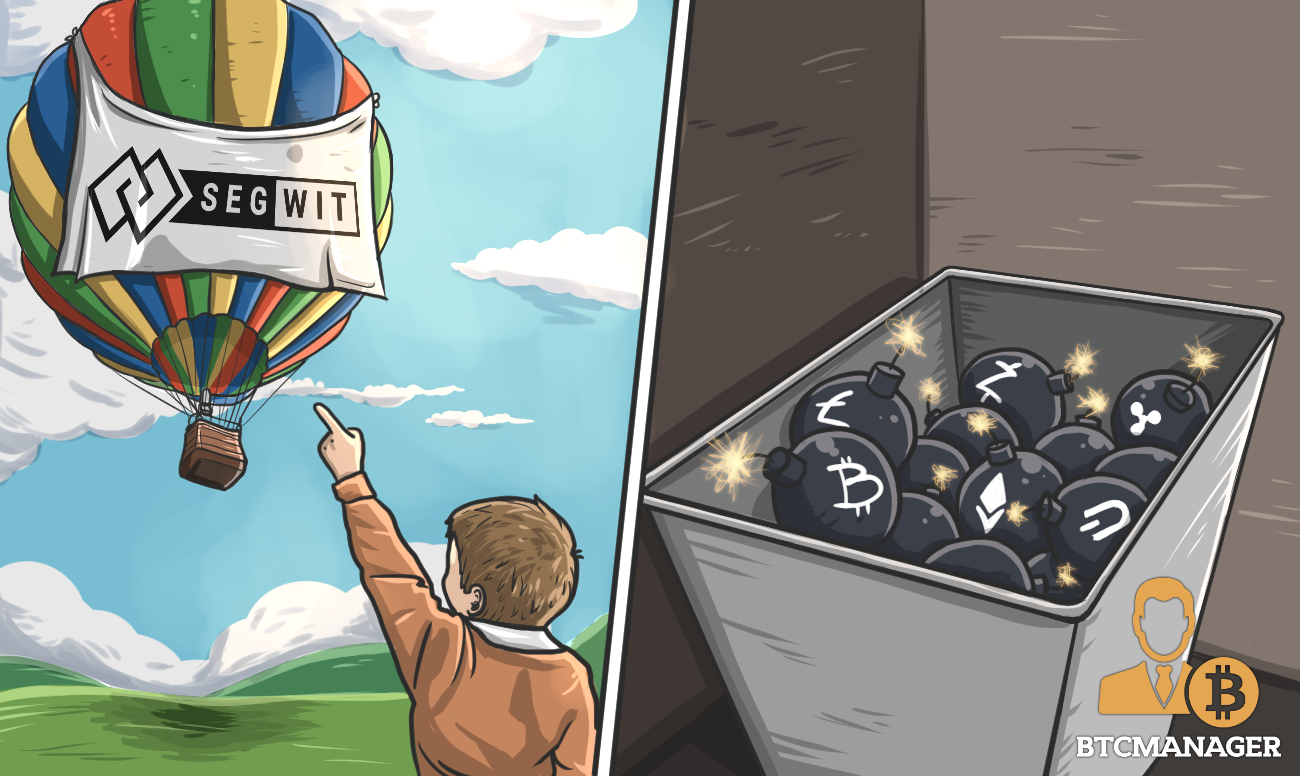 It has been another interesting week for the crypto economy. SegWit2x Alpha, which aims to solve many of bitcoin’s scalability issues, is out and has so far received over 75 percent support from the bitcoin blockchain’s hashrate. While ether experienced a flash crash sending the cryptoasset to a low of $0.10 momentarily.

While this news has calmed fears of bitcoin’s scalability issues negatively affecting the price of bitcoin in the future, what is still uncertain is whether enough market participants also agree to the accompanied hard fork to upgrade the bitcoin network.

In the past week, we were also served with a harsh reminder of how risky and volatile cryptocurrency still is when a flash crash on the GDAX exchange caused the price of ether to drop from $320 to as low as $0.10 in a matter of seconds. This flash crash was caused by a multi-million dollar ether sell order and triggered numerous limited orders will below the desired trading levels of traders. Coinbase, the owner of the GDAX exchange, however, stated that it will reimburse those who made heavy losses due to the flash crash on their platform. Fortunately, for ether holders, the price of ether continued to trade in the low $300s shortly after the incident.

However, the move by GDAX raised concerns of moral hazard and may serve to encourage more speculative behavior in cryptocurrency markets.

Declaring Crypto at the U.S. Border: Say What?

On May 25, a bipartisan congressional group consisting of Sens. Charles Grassley (R-Iowa), Dianne Feinstein (D-Calif.), John Cornyn (R-Texas) and Sheldon Whitehouse (D-R.I.) introduced to Congress the Combating Money Laundering, Terrorist Financing and Counterfeiting Act of 2017. This legislation if enacted would usher in an easier process for the federal government to seize assets transported overseas or into the United States.

The intent of the legislation is to make it more challenging for drug dealers, terrorists and other criminals to transport money and other “financial instruments” across the U.S. border. Several controversial provisions in the proposed legislation, however, could put law-abiding American citizens in a precarious situation – one where they’d risk losing tens of thousands of dollars for nothing more than neglecting to complete a government form.

This proposed legislation would expand the definition of “monetary instruments” codified under current law to include “prepaid access devices, stored value cards, digital currencies, and other similar instruments.” This is where it becomes dicey because cryptocurrencies, such as Bitcoin, are technically always transported via the digital currency owner wherever he or she travels to.

The CryptoPunks platform is currently in its early stage of development and has begun with the distribution of 10,000 unique CryptoPunks on the Ethereum blockchain. Each CryptoPunk represents a unique character each with its own characteristics, different theme and most importantly, token or cryptographic signature. While most are male or female, there are some rare ones, such as an alien character.

“We have also created a marketplace where you can buy and sell individual Punks. You can either offer them for sale to anyone for a minimum price, or to a specific person. The zoomable image above is connected to the Ethereum network and has been colored to show you which punks are currently owned or for sale,” explained Hall and Watkinson.

The UK’s financial regulator, the Financial Conduct Authority (FCA), has announced the second cohort of its fintech sandbox on June 15. Out of the 24 startups joining this year’s cohort, nine are developing solutions using blockchain technology, which is a testament to the potential that the FCA sees for this new technology to play a major role in the financial services sector of the future.

The FCA’s fintech sandbox allows startups to trial new financial products and services without “incurring the normal regulatory consequences.” The idea behind the fintech sandbox is to boost technological innovation as well as competition in the UK’s financial industry.

Unsurprisingly, bitcoin has been all over the media in the past few months as global adoption and the demand is increasing. However, adoption rates are faster in some countries, such as Japan, China, and India than others. One of the countries where bitcoin adoption is slower than expected is New Zealand.

According to a report by local news publication, bitcoin adoption has been slow in New Zealand because it is not that easy to actually buy bitcoin locally using the New Zealand dollar. Bitcoin buying options for New Zealanders are effectively limited to peer-to-peer exchanges such as LocalBitcoins and Paxful, where buy prices usually come with a high premium and the country only has a handful of local exchanges, such as NZBCX and Cryptopia.

Insurance giant AIG, the commercial bank Standard Chartered, and IBM have announced the successful completion of the pilot of the first ever multinational smart contract insurance policy backed by blockchain technology.

The solution was built by IBM and is based on the Hyperledger Fabric framework, which is one of the Hyperledger projects hosted by The Linux Foundation. The technology allowed the three companies to create a smart contract from the combination of a multinational, controlled master policy written in the UK, and three local policies used in the US, Singapore, and Kenya according to the companies’ press release.

Everledger, the London-based startup that uses the blockchain to securely store data and provide provenance for high-value physical assets such as diamonds and artwork, has entered into a partnership with the Singapore Diamond Investment Exchange (SDiX) and physical commodity markets expert Kynetix.

The Singapore Diamond Investment Exchange (SDiX) is the world’s first commodity exchange in physically settled diamonds. The exchange is also the first fully electronic self-regulated marketplace for traders and accredited investors powered by real-time transaction data. The exchange revealed the new partnership through a press release on June 15.

Kynetix is a leading physical commodity digitization expert that has developed a platform called Sentinel that allows commodity exchanges and trading companies to meet the challenges associated with compliance, automation, risk and revenue generation. The three companies have successfully concluded the first part of its proof-of-concept for a blockchain-based authentication and record-keeping service for trading diamonds on a global commodity exchange.

For the love of Zeus, stop misusing Thucydides

It sometimes seems as if the only people who mention the man’s name in ...