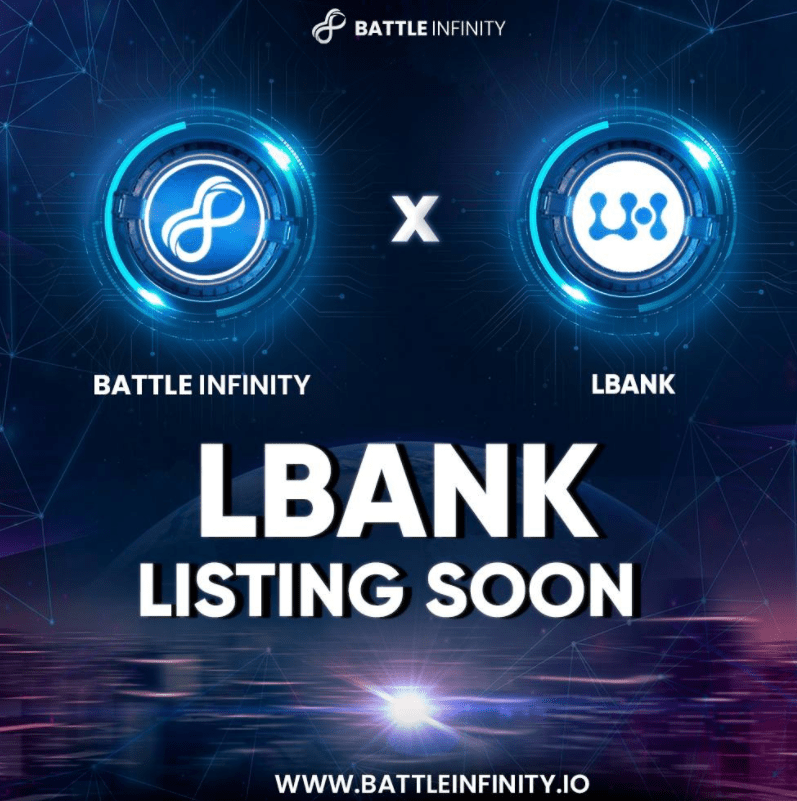 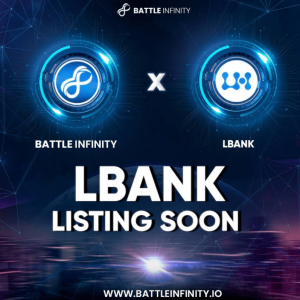 The price of Battle Infinity IBAT has increased by 446%, and the Play-to-Earn Metaverse gaming platform has just revealed that it will be launching on the LBank exchange within the next week, which further adds to the purchasing pressure.

An ecstatic community of buyers was already celebrating profits of up to 700% since the IBAT token appeared on the decentralized exchange PancakeSwap, where you can buy the token today.

The news was transmitted to the community via a message on Twitter, which was seen by the happy community of buyers.

The fact that Battle Infinity’s IBAT was just recently listed on PancakeSwap two days ago, on Wednesday the 17th, makes the story even more extraordinary.

Earlier on today, there was a news publication stating that a centralized exchange listing was said to be “coming in days,” however, as it turns out, it’s already happened.

The headquarters of Battle Infinity may be found in India, which is also the birthplace of Polygon and the MATIC token.

It is a country with a massive and expanding population that is tech knowledgeable, including a highly aspirational middle class that is interested and active with crypto to varying degrees.

This country is known for its proficiency in software engineering and has a large population that is tech-savvy.

The initiative has been given extensive publicity in the media in India, from the press to national TV and online, and it has even trended in the top 10 on Twitter in India.

According to CoinMarketCap rankings, LBank is presently the 18th largest cryptocurrency exchange, with a 24-hour trading volume of more than one billion dollars.

According to the Battle Infinity team, listings on the data websites CoinMarketCap and CoinGecko will be forthcoming in the very near future.

As a result of the very positive response that the project has received from the cryptocurrency community, there are likely to be many more listings for centralized exchanges (CEX) than this one, which is expected to be only the first of many.

There are already over 7,290 people that have tokens held in their possession.

IBAT was sold in its presale at a price of $0.0015 per token; however, it is presently trading on PancakeSwap for $0.0082 per token. This represents a gain of 446% for those who participated in the presale.

There are currently 28,700 members on the project’s Telegram channel, which means that it will soon exceed 30,000 members, and there are 22,000 followers on its rapidly increasing Twitter account.

Battle Infinity is unequivocally gaining good attention at a time when more market participants are researching the market in quest of the next coins that will burst in value.

In point of fact, the price performance of Battle Infinity today is in sharp contrast to the rest of the market, which has seen a widespread decline led by the bellwether asset bitcoin, which has fallen 8.5% over the course of the last twenty-four hours.

Battle Infinity is already being referred to as the next Axie Infinity, but the developers aim to have learned from the mistakes made by Axie by putting an emphasis on compelling gameplay and P2E dynamics that are not dependent on speculation about the in-game token and token inflation. 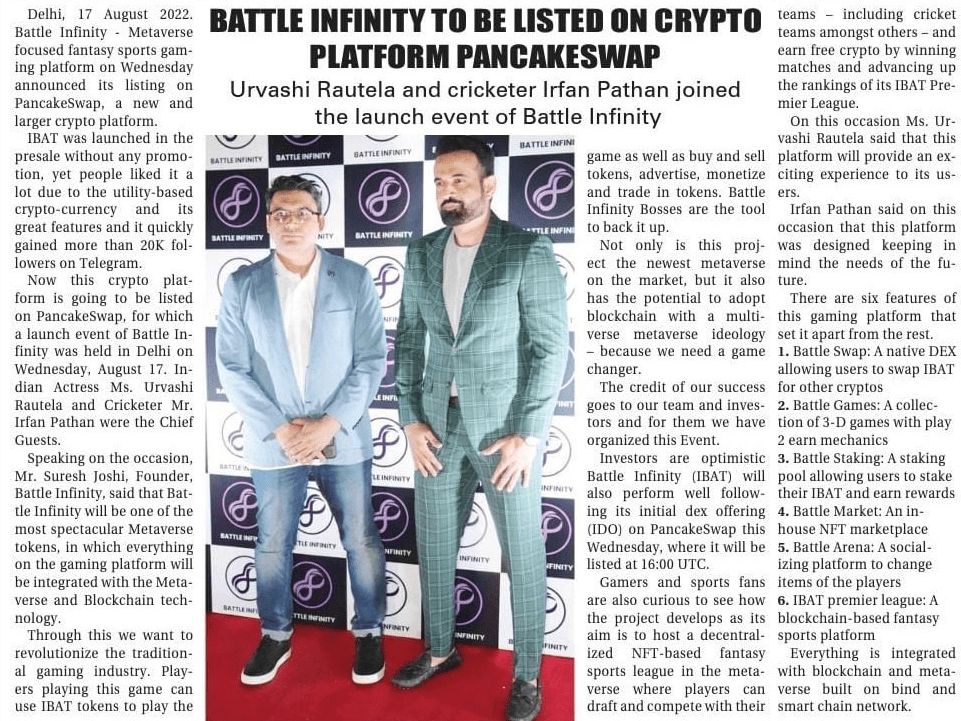 The presale for Battle Infinity was successful in raising 16,530 BNB in a span of 25 days, and the purchasing pressure has not let up since the original offering made by the decentralized exchange.

Wednesday in New Delhi saw the unveiling of the token, and to celebrate the occasion, a lavish launch party was organized at an event that was attended by celebrities.

Urvashi Rautela, who had previously held the title of Miss Universe and is now an actress working in Bollywood, was present at the gathering. Irfan Pathan, a legendary cricket player, was present as well.

The company’s founder, Suresh Joshi, warned earlier this week that more shocking disclosures will be made in the following hours and days, as excitement over Battle Infinity was at an all-time high and everyone, even A-list celebrities in India, wanted a piece of the action.

They have been completely floored by the amount of attention and comments the firm has been receiving from people from all walks of life in India and all across the world, whether they are digital entrepreneurs or cricket-obsessed sports fanatics.

He went on to say that, in all seriousness, the IBAT Premier League platform will make room for all sports. This indicates that there will be a space for your passion within the Battle Arena Metaverse, regardless of whether football or basketball hoops is what gets you going.

IBAT token holders won’t have to wait too much longer before they can start putting their tokens to use and getting in on the action because the plan calls for the release of the Battle Swap and Battle Stake products to be targeted right now.

What’s the Procedure for Buying IBAT on LBank?

Keeping in mind that LBank is a centralized exchange, all that is required of you in order to purchase the token is to fund your account and make the purchase using USDT (Tether).

On contrary to the PancakeSwap exchange, where a tax on sales of 12% is applied, there are no taxes of any kind applied to exchanges conducted on LBank.

LBank is a Hong Kong-based exchange that is rapidly expanding, and it offers trade execution and training materials that are among the finest in the industry. 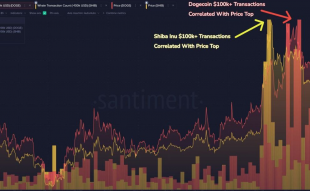 As Shiba Inu Dogecoin Whales Pull Back Is It Good Time To Buy Now?