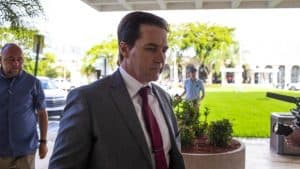 One of the longest-standing cases in the history of the cryptocurrency industry is getting yet another twist, as a judge just ruled in favor of crypto entrepreneur Craig Wright in his dispute with the estate of former business partner David Kleiman.

According to multiple industry news sources, a United States District Court Judge Beth Bloom has ruled that a previous order compelling Wright to turn over half of his Bitcoin holdings to the plaintiffs will not stand.

The dispute between both parties is in relation to a stash of up to 1.1 million BTC, which the Kleiman estate claims that Wright embezzled from David while they worked together to mine Bitcoin years ago. Last August, U.S. Magistrate Court Judge Bruce Reinhart ordered that Wright had perjured himself by presenting fake documents to the court, and immediately ordered the Australian computer scientist and businessman should turn over 50 percent of the Bitcoins to the Kleiman estate.

2/ then you may want to check the markets everyday leading to Craig Wright getting the Tulip Trust letting him hold over 1 Million Bitcoins or exit all together for protection against Bitcoin crashing letting Bitcoin SV overtake #1 place on Coinmarketcap.

However, as court documents filed with the U.S. District Court in Florida on January 10 show, Judge Bloom ruled that the previous sanction as improper. Per the ruling, the judge deemed that although Wright did have an equal partnership with Kleiman, this fact didn’t necessarily mean that the partnership was extended to the discovery of the Bitcoins in question.

All depositions in the Craig Wright case are postponed–Craig's, his wife Ramona's and the deposition of Andrew O'Hagan from the London Review of books. Ira Kleiman's lawyer have until Tuesday to seek any other relief. pic.twitter.com/X8J44hvs2z

In addition, Judge Bloom claimed that even if the court chose to accept the facts, the abuse of discovery (in this case, of the Bitcoins) would still be “uncured,” since the court doesn’t have an estimate of how much Bitcoin Wright owns. However, the judge also pointed out that Wright hadn’t acted in good faith as this case continued to stand, and she ordered him to pay the attorney fees incurred by the Kleiman estate.

Even at that, Wright is still not out of the woods just yet. As the filing states, the computer scientist has until February 3 to let the court know if a “mysterious bonded courier” has arrived with the access key to his Bitcoin wallet, so they can finally get a glimpse of his Bitcoin holdings. While the judge questioned the possibility of his previous assertion that he’d get his courier to deliver the key by this month, she urged the court to indulge him and afford him the opportunity to grant them access to his holdings on their own terms.

Although Wright has been involved in this legal dispute for well over five years now, he has continued to be perhaps the most infamous name in the entire crypto space- particularly for his continued claims that he is Satoshi Nakamoto, the pseudonymous entity (or entities, as the case may be) that developed Bitcoin and released the whitepaper for the digital asset back in 2008.

4/ It would be amazing if Craig Wright can prove he is Satoshi Nakamoto in which he has become to know as very arrogant and misleading. I do not support or agree with Craig Wright and he may take credit for creating Bitcoin from Dave Kleiman.

Last December, he appeared in an interview with Modern Consensus, where he showed a document which he claimed validated his claim to be Nakamoto. The article represented a digital database from the academic journal JSTOR back in 2008. In it, the story of Tominga Nakamoto- a Japanese 17th-century economist- is told.

However, the article itself also had the following handwritten notes:

Bitcoin Price Prediction: BTC/USD Price Stable Above $8,000 But Can It Climb Again?

Gary McFarlane •5 hours ago Last Updated: 5 hours ago
View All News
Note that the content on this site should not be considered investment advice. Investing is speculative. When investing your capital is at risk. This site is not intended for use in jurisdictions in which the trading or investments described are prohibited and should only be used by such persons and in such ways as are legally permitted.